Viktor & Rolf's debut fragrance with L'Oreal, Flowerbomb, is due out next spring. 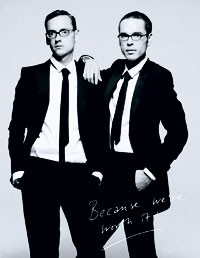 The public will find out next spring, when Viktor & Rolf’s debut fragrance with L’Oréal, Flowerbomb, lands like a happy pink grenade in about 1,000 doors worldwide.

“It stands for our philosophy of life. It symbolizes the power to transform anything into something positive and beautiful,” Viktor Horsting said earlier

L’Oréal’s first designer fragrance start-up since 1982, the scent was unveiled Wednesday at the Viktor & Rolf show. And, while it may be the baby of L’Oréal’s vast portfolio, which includes established designer names such as Giorgio Armani, Ralph Lauren and Cacharel, executives are banking on fast growth.

“We didn’t do this to be niche. We’re not excited by small things,” said Patricia Turck Paquelier, international brand president of L’Oréal’s Prestige & Collections International division. The Viktor & Rolf brand is part of PCI.

Already, there are plans to extend Viktor & Rolf’s reach into other categories, such as men’s scents.

Initially, L’Oréal is pursuing a tight approach to distribution. In the U.S., where the scent will likely be sold exclusively through one chain in no more than 50 doors, the strategy is equally selective.

“Our desire is to handle the two designers in a very special way,” said Jack Wiswall, president of the designer fragrances division at L’Oréal USA. “Our approach is going to be very, very limited distribution.”

“We have to nurture this brand,” agreed Richard Pinabel, assistant vice president of marketing at Viktor & Rolf at L’Oréal. “We need to take care of it.”

Like Turck Paquelier, Wiswall is equally bullish about the brand’s potential.

“We certainly think wherever we go, Flowerbomb should be one of the biggest launches [the retailer] has,” Wiswall said.

Executives declined to discuss numbers, however, industry sources estimate the fragrance could do $15 million at wholesale in its first year.

To help Flowerbomb stand out from the crowd, L’Oréal has created a shelving unit on which the product is set in a higgledy-piggledy fashion, as if there had been an explosion or earthquake. “It’s very impactful when you walk by the shelf,” said Franck Salzwedel, international brand manager for Viktor & Rolf beauty.

Flowerbomb’s explosive theme is carried through to its faceted, jewel-like bottle, designed by Fabien Baron. The designers’ wax-seal logo is positioned at the neck of the orb-shaped bottle, like a pin on a grenade. The flacon also features a metal plaque engraved with Flowerbomb and the brand name.

In a separate interview, the designers said they were closely involved in the development of the juice and the packaging — but coining the word “Flowerbomb” set it all in motion.

“Once we had the name, we knew it had to be an explosive first impact,” Rolf Snoeren said. He described the first impression as “smelling a thousand flowers” and demonstrated how one pump of the bottle delivers a powerful blast.

“We wanted a very complex fragrance, so it changes during the day,” Snoeren said.

Horsting described the initial smell as “fresh” and then the dry down as “like an embrace; it’s very warm.”

Flowerbomb’s juice was concocted by International Flavors and Fragrances’ Olivier Polge, Carlos Benaïm and Domitille Bertier. Its top notes feature tea and bergamot; Sambac jasmine, orange tree, Catleya orchid, freesia and Centifolia rose are at its heart, while base notes include patchouli.

It was not that creating the scent was a straightforward process, though, as the designers had strong opinions on just about every element — and incredible knowledge of all their competitors.

“It drove them crazy and it drove us crazy,” Snoeren said. “We wanted utopia in a bottle. We wanted it to be classic but revolutionary. We wanted it sweet, but we didn’t like sugar.”

But there was never a doubt about having a strong link between their fashions and the fragrance.

“We always said fashion is more than a product, more than clothing. It’s about dreams, and perfume is a dream in a bottle,” Horsting said.

Wednesday’s show exemplified the connection, opening with elaborate dresses composed of the black ribbons that grace the box, and then exploding midway into a romantic vision of flower-like women.

Taking an abstract concept and expressing it through clothes is the essence of Viktor & Rolf. They burst on to the international fashion scene in 1998 by showing some of the most arresting couture confections of the decade: evening suits inspired by the mushroom-shaped clouds of atomic explosions; evening gowns festooned with thousands of bells, and their landmark “Russian doll” collection, in which the designers dressed tiny Maggie Rizer in nine ever-larger layers and spun her on a turntable.

They plunged into ready-to-wear in 2000 with Italian manufacturer Gibò, and recently added footwear, handbags and men’s wear to their range of products. And, while they’ve hardly given up their conceptual roots, the pair are as fond of the red carpet as Sharon Stone, and hope to be known for modernity and glamour as much as theatricality.

To be sure, the fragrance launch and the advertising push are bound to take the Dutch duo to a new fashion zenith.

Although prized for their theatrical shows by fashion editors and retailers, their business remains small. According to market sources, their Amsterdam-based firm currently generates about 6 million euros, or $7.4 million, at wholesale.

“It’s a way to reach a much bigger audience, so it will be a boost for the brand,” Snoeren said.

Flowerbomb is the first offspring of a marriage celebrated in 2002 when Horsting and Snoeren signed with L’Oréal. Turck Paquelier recalled the pair took their vows so seriously, that after inking the agreement they offered her a wedding band engraved with both companies’ names. “It was a nice gesture,” she said.

An advertising campaign, comprising single- and double-page ads shot by Inez Van Lamsweerde and Vinoodh Matadin under the artistic direction of Baron, will accompany the launch. The ad features model Isabeli Fontana entwined in a Viktor & Rolf ribbon, her head covered by a pink- and purple-tinted opaque shroud that rises in the air to resemble a flower’s petals.

Turck Paquelier noted signing a licensing deal with the avant-garde designers offered L’Oréal the prospect of working on fragrance in a different way, an appealing notion in today’s saturated market.

“It was a superb opportunity for us to think out of the box,” she said. “And to do something different to what we’re doing today.”