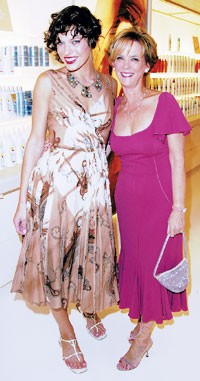 LOS ANGELES — At the touch of a screen, like something from the Holodeck on the Star Trek Enterprise, the inside of a 64-square-foot pod, upholstered in plush cream suede, transitions from the fluorescent brightness of an office to the red glow of nearby Hollywood hot spot Spider Club.

But this is no spaceship — nor is it a Hollywood stage set, for that matter. It’s the TrueLight pod, an enclosed alcove designed to give a better sense of makeup and hair color in true-life scenarios. And it’s located inside L’Oréal Paris’ first U.S. store, called the Living Lab, at the Beverly Center here.

“Their products are great,” Jovovich continued, as she stood near a light box with her photograph, “and they stand for so many things — like no animal testing. They give to great causes. A company with that kind of honesty and commitment should have its own store. It shouldn’t just be in a supermarket or drugstore.”

Hamilton is banking that consumers will agree. “We wanted to make beauty exciting, provocative and fun — and relevant,” she said. “At the same time, you’re learning what really works.”

Peppered throughout the space are placards, some printed with sound bites for makeup application, others with L’Oréal’s signature witticisms.

The 2,300-square-foot retail space, bookended in the shopping center by Just Cavalli and Max & Co., is as much a striking visual experience as it is a triumph of a mass brand showcased in hip, prestige environs. Hamilton and her team chose South African architect Lindy Roy out of a group of eight who were paid to compete for the commission. Hamilton noted that about 80 percent of the line is available here. “Lindy [Roy] understood the role the product should play,” she said. “When you look at a mass-marketed brand, all of our logos aren’t the same. When you look at this place, it’s not a museum.”

The entrance in the space’s glass facade is framed by an oversized, broken silver “O,” which suggests arms embracing upwards and is a nod to the brand name, Hamilton pointed out. Step in and onto the “red carpet” — actually a swirl of glossy red paint on the white floor — which also represents “a new beauty journey,” said Hamilton, stating another of the retail enterprise’s mantras. There are “play stations” — curving red-and-white open tester islands — that are one-ended with a Corian sink so that “customers don’t even have to ask to use it.” Across the top, jutting from the surface of a crescent Corian counter, are dozens of clear tubes tipped with thick swatches of hair in L’Oréal shades.

“We really wanted women — and men — to feel they can just flow through the store, with nothing in between them and the product or staff,” said Hamilton, discussing the store’s inspiration. “The idea was in the Living Lab concept. We talk to our customers all the time in focus groups. But to talk to her at the point of sale, where she’s thinking about beauty and really able to ask the questions that are on her mind — that’s where we are going to learn.”

Along the walls on either side of the space are lit acrylic shelves filled with product. The brightly colored bottles of sunscreen and hair product take on a Pop Art effect here. On a wall of clear shelves are stacks of the silver, foil-covered photo books, called “Because I’m Worth It,” that the company published last year. Next to them, boxes are filled with packaged 60-watt halogen bulbs. “It’s little touches like these that expand the concept of the store,” Hamilton remarked.

Then there is the pod. Vanilla suede covers a high bar stool and a curving bench for a friend or two to share in the lighting experience, thanks to lighting specialist Bill Schwinghammer, who collaborated with Glide Inc. engineers Dave Liatti and Steve Feurborn.

Touch the screen bar labeled “bathroom” and the pod lights up as it would at home. The range of settings goes from candlelight in a restaurant, to the sunlight of the beach, to even the glare of the red carpet. There are even options designed to give the impression of being at L.A. hot spots like Dolce, Koi, Concorde, Joseph’s and others.

Nightlife impresario Brent Bolthouse collaborated on the settings. He also staged Friday’s opening like a nightclub, complete with a deejay and plenty of tray-passed lemon drops.

Hamilton declined to discuss the costs for the build-out or how much the store might generate in terms of sales volume, but according to area realtors, stores in the Beverly Center typically generate as much as $700 in sales per square foot.

A second Living Lab is slated to open before the holidays at the West Farms Shopping Center in West Hartford, Conn. The signature stores, Hamilton believes, will make the beauty company a better partner with its thousands of retailers. “They ask us all the time how they can better merchandise the product. We can give them advice, but this gives us hands-on experience.”

While focus groups are good, she noted, they only “take you to a certain level. More and more, we’re realizing we need to touch our consumers at the point of contact with the product. We might be number one in the industry, but we need to know more, we need to be better.”

“Maria’s rise in the tennis world has been noteworthy,” said Kathleen Galvin, vice president of marketing for Fort Lauderdale, Fla.-based Parlux Fragrances. “She is bright, engaging and loves fashion. She is incredibly excited, and we believe it will be a success.”

Sharapova is the world’s ninth-ranked tennis player and this year became one of the youngest women to capture the Wimbledon crown. The Russian native has a fan base that is expanding locally and globally, and the prestige and presence of the Parlux brand could strongly resonate throughout Eastern Europe.

“Tennis is and will always be her main priority, but she will certainly be as involved as much as possible,” said Sharapova’s agent, Max Isenbud. “We fully realize she is becoming a brand, and this was the right move at the right time. It will reflect what Maria is: classy and elegant.”

For Sharapova, the Parlux deal may be a perfect match. “This is a great opportunity for me to do something creative and fun,” Sharapova said in a statement. “I love the world of fashion and am looking forward to experiencing it firsthand.”