By Brid Costello and Jennifer Weil on December 17, 2007
View Slideshow 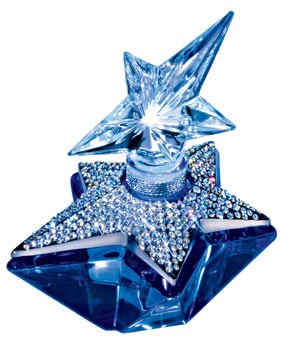 Hair by Harrods: A Multitasking Salon Opens at the Knightsbridge Store

In 2007, one-and-a-half decades after the Groupe Clarins-owned brand launched Angel, the iconic and esoteric women’s fragrance in a star-shaped bottle, Mugler introduced for yearend a constellation of limited edition products to fete its milestone birthday.

The biggest project was a one-shot fragrance for women, called La Part des Anges, whose name was taken from what spirit makers in France call liquid that evaporates — almost magically — over time. La Part des Anges was created under the auspices of cognac maker Rémy Martin and Givaudan perfumer Françoise Caron. The extract of Angel, aged for 23 weeks in wooden cognac barrels, filled 4,742 blue-colored, numbered fragrance flacons studded with fake crystals and topped with a star.

“It was a big success,” said Joel Palix, president of Thierry Mugler Parfums, of the limited edition launched at the end of October. “We’re out of stock.”

So, too, is the one-shot, fake-jeweled ring, whose face opens to reveal a solid version of Angel. And the jumbo, 450-ml. Angel bottle priced at 2,000 euros, or $2,889 at current exchange, has already had at least three takers through Mugler’s recently launched Web site for France.

All this activity, among others, helped spur the Mugler brand’s business by between 5 and 15 percent in sell-through, depending on the country, said Palix. Last year, Thierry Mugler Parfums’ sales reached 160.9 million euros, or $202.1 million at average yearly exchange.

Palix added that Angel generates somewhat more than half of Thierry Mugler’s sales, and that France, the U.S. and Spain are its strongest markets. The Alien women’s scent is Mugler’s second-best seller and clocked up double-digit gains this year.

Palix said Thierry Mugler Parfums has found innovation to be the key to success in the fragrance industry. It allows a brand’s story to be “never ending” and for it to recruit customers perennially, he explained.

Mugler’s first makeup collection, Dare the Metamorphosis, which is being launched in limited distribution this month, also could expand the brand’s consumer reach.

Despite chilly December temperatures, a line of revelers snaked outside the Serpentine Gallery to join the likes of Boy George, Rosanna Arquette, Francesca Versace, Jessica Stam and Peaches Geldof on the dance floor, which heaved with fans of DJ Mark Ronson.

“I’m going back home for Christmas next week, so I thought it was one last opportunity to have fun before doing all the family stuff,” said model Jamie Dornan. The impending holidays also were perplexing for model Ben Grimes, who is on a quest for the perfect one-off gift. “I’m getting my boyfriend handmade Italian leather shoes,” she said.
— Brid Costello

LONDON — Chanel No.5 spokeswoman Nicole Kidman has won “substantial damages” from The Daily Telegraph, according to Kidman’s lawyer, after the newspaper alleged she promoted a Jo Malone fragrance while attending press junkets for her film, “The Golden Compass,” here.

“The publication of the article has caused damage to the claimant’s [Kidman’s] personal and professional reputation and she has suffered considerable embarrassment and distress,” according to a statement read in London’s High Court on Friday by the actress’ lawyer, John Kelly. Kidman will donate the unspecified damages to the United Nations Development Fund for Women.

The Daily Telegraph also agreed to publish an apology and a retraction, as well as pay for Kidman’s legal costs, according to a statement from Kidman’s lawyers.