Fragrance supplier Symrise has reorganized its management, changing the roles of Kathy Cullin and Roger Schmid. 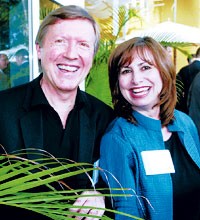 Symrise was established in 2002 when two fragrance suppliers, Dragoco and Haarman and Reimer, merged. In the initial phase of operations, Roger Schmid was named president of Symrise’s global fine fragrances worldwide and Tim Schaffner was named president of fragrance and cosmetics worldwide, overseeing the entire firm, including its consumer products divisions, which supply fragrances for items like hair care.

In the new structure, Cullin takes over Schmid’s former job and Schmid will take on a new role: that of chief innovation officer, charged with expanding Symrise’s creative image. Both Cullin and Schmid now report to Schaffner.

In her new role, Cullin will be responsible for the international development of Symrise’s fine fragrance sector. She’s no stranger to the prestige market. Before joining Symrise, she had served as general manager at Puig North America and president of Puig USA. Prior to that position, she had held other managerial positions at Puig Beauty and Fashion, and before joining Puig, had spent 14 years at Calvin Klein Cosmetics.

Cullin is eager to, as she put it, “combine my experience in the retail and manufacturer sectors with the outstanding creative talent at Symrise — which will immediately impact the global organization in translating the needs of our customers.

“We can’t continue to think in traditional ways in creating fragrances going forward,” she added. “It’s critical to have a strong point of view.” To that end, greater investments will be made in several areas, including olfactive research, she said.

Schmid’s responsibilities will include examining strategic partnerships in the areas of fashion, art and design, as well as developing projects for the fragrance division’s image and communications efforts. One of Schmid’s first initiatives will come with Milan’s Universita dell’Immagine, of which he was a co-founder in 1998 with Fabrizio Ferri. The school specializes in what it calls “synaesthetics” — the concept of connecting all activities linked to the senses. Symrise has entered into a long-term sponsorship of the school, and an education center for Symrise and its clients will be built there by the end of the year. As well, there are plans to bring a branch of the school to the U.S. within the next few years. — Julie Naughton

Lush to Expand in U.S.

NEW YORK — At the end of 2003, Lush, the British-based natural bath and body chain, had four U.S. doors. By the end of this year, the company expects to have 15 more, including its first Chicago store, which is set to debut the third week in October, and stores in Pasadena, Calif., Boulder, Colo., and the borough of Queens in New York in November.

Lush North America president Mark Wolverton said the company’s “stretch target” is to operate 160 U.S. stores by 2008. For the fiscal year ended June 30, Lush reported $9 million in U.S. retail and online sales, with the latter driving 45 percent of U.S. sales. Next year, the company is projecting that combined number will double. “We started looking at street front locations only, but we’ve just opened an airport store in Orlando [Fla.]. That will give us a sense of how the brand will do in a U.S. airport,” noted Wolverton, adding that the company will also be opening stores in malls like Ala Moana in Waikiki, Hawaii. — Jackie Cooperman