Zirh International Corp. is already among the top men's skin care players in department stores, but now it wants to be more of a factor in men's fragrance, as well. 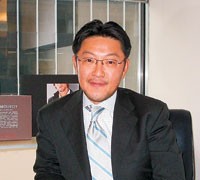 NEW YORK — Zirh International Corp. is already among the top men’s skin care players in department stores, but now it wants to be more of a factor in men’s fragrance, as well.

To that end, the $75 million, wholly owned subsidiary of Shiseido Co. Ltd. will introduce a men’s fragrance, called Corduroy, Est. by Zirh Intl., in about 600 department store doors in August. It will be positioned as a stand-alone brand within Zirh International Corp.

The fragrance represents a major design departure for Zirh, a company that’s known for its namesake brand’s cool silver, blue and gray motifs. While the company launched Zirh Eau de Toilette — whose brushed-metal and clear glass design blends in with the 40-item Zirh assortment — four years ago, Corduroy by comparison, features a warmer, more sophisticated look.

The front and back of the charcoal-gray Corduroy bottle is shaped in an undulating profile, inspired by the raised ridges of corduroy fabric.The bottle was designed by Chad Lavigne.

Among the ancillary products in the Corduroy collection is a product Zirh executives are calling a first: a roll-on aftershave balm.

Corduroy is meant to add further diversity to the Zirh International Corp. fragrance portfolio. The company also holds the licenses for French Connection men’s and women’s fragrances, which it launched in fall 2003 and for the John Varvatos fragrance and skin care collections, which were launched in 2004 and earlier this year, respectively.

Kaoru “Tim” Takagi, president of Zirh International Corp., sees Corduroy as the fist step in developing an organic Zirh fragrance business. “We want to be a major player in the men’s fragrance category,” he said.

Quest blended the scent, which features an olfactory accord called Aquacoral — described as the aroma of undersea coral. Corduroy also features notes of grapefruit and mandarin, bay rum and cinnamon and cedar wood and sandalwood. The full Corduroy collection will include a 2.5-oz. eau de toilette for $45 and a 4.2-oz. edt for $58. In addition to the roll-on aftershave balm, which is priced at $30 for 1.7 oz., there are two other ancillaries: A 6.7-oz. hair and body wash for $24 and a deodorant stick for $16.

Support for Corduroy will include in-store sampling and an estimated 12 million to 15 million scented impressions as part of co-op advertising and a national print ad campaign involving between five and seven men’s magazines. The effort is reportedly worth between $4.5 million and $5.4 million.

Following its summer launch, Corduroy is expected to reach from 900 to 1,200 doors in the U.S. as the scent is rolled out through next year. Plans call for retailers like Macy’s, Bon-Macy’s and Bloomingdale’s to carry the scent. Worldwide, the fragrance could reach 4,500 doors by fall 2006.

Nicholas Ratut, executive vice president and chief operating officer of Zirh International Corp., noted that internationally, Corduroy would be distributed in “key Zirh countries, select markets,” which include Canada, the U.K., Scandinavia, the Middle East, Australia and South Africa. “It sets Zirh firmly within the men’s market,” he said. “It’s a men’s brand with great potential.” While the U.S. accounts for as much as 60 percent of the total Zirh business, Ratut would like to see domestic and international sales even out to half each.

Takagi, a 20-year veteran of Shiseido, who became president of Zirh last fall, added, “For a while, only a few companies existed in men’s [treatment]. In less than two years, [other brands] have come in, so we really want to be the leader in men’s treatment and fragrance.”