Industry powerhouses and newcomers alike have launched fund-raising products to commemorate the month and are getting involved with the cause on a fundamental level. 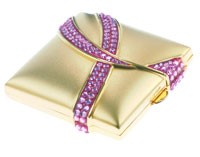 Hair by Harrods: A Multitasking Salon Opens at the Knightsbridge Store

As far as the beauty industry is concerned, the color of the month is pink all the way. Industry powerhouses and newcomers alike have launched fund-raising products to commemorate the month and are getting involved with the cause on a fundamental level.

THE ESTEE LAUDER COS.

Twelve of the venerable cosmetics company’s divisions are keeping consumers flushed this October with a plethora of offerings aimed at raising funds for the BCRF. The Lauder brand released its 2004 Pink Ribbon Compact, a gold mirror with pink rhinestones wrapping around it in the shape of a ribbon, which retails for $45. The brand also is donating profits from sales of Pure Color Lipstick in Elizabeth Pink, $22, and a $15 Pink Ribbon pin to the foundation. Clinique is offering a lip gloss palette with 10 classic pink shades, $20, and Stila has created the Stila Pink Ribbon Set containing a new lip color and a compact with two eye shadows and a cheek color, $36. Donna Karan has created a new pink lip balm, $20, and is also making a donation from October sales of the new Be Delicious Eau de Toilette spray, $45 for 1.7 oz. and $60 for 3.4 oz.

Evelyn Lauder and Jon Passavant (the face of Lauder Beyond Paradise Men) created a buzz for the cure at Saks Fifth Avenue in New York. In support of Saks Key to the Cure Event taking place Thursday through Sunday, Lauder and Passavant signed products and autographed personal photos with customers Thursday who made Estée Lauder purchases during the event. All Saks stores and saks.com will donate 2 percent of all proceeds from purchases made during Key to the Cure to BCA charities, including Lauder’s Breast Cancer Research Foundation.

Orly International will donate a portion of the proceeds from sales of its Who’s Who Pink nail lacquer, $6.50, and Top 2 Bottom top coat/base coat treatment, $5.85, to benefit the Expedition Inspiration Fund for Breast Cancer Research. On Oct. 2, an Orly International team hiked with the Malibu-based fund’s Take-a-Hike Campaign in Los Angeles, raising more money for the cause.

The Avon Breast Cancer Crusade, founded in 1993 and which has, to date, raised $300 million through the sale of its “pink ribbon products,” is offering two new products this October in conjunction with offers from Mark, Avon’s “younger” line, and Avon Salon and Spa. Net proceeds from all products will support Avon’s Crusade.

ABCC Celebrity Nailwear will retail through October at $3 and an ABCC official Holiday Ornament will be offered at $7.50. The polish comes in six shades, each named for one of six female celebrities who helped to create them: Salma Hayek, Sharon Stone, Cybill Shepherd, Tracee Ross, Leah Remini and Ali Landry.

Mark has created a limited-edition Kiss Kit with cinnamon-flavored Mark Mints and rosebud-scented Kiss Therapy lip gloss, retailing at $6. As well, Avon Salon and Spa has designed a $125 pink spa robe with a Crusade ribbon on the lapel. Ten percent of the profits will go to the Crusade.

Sephora is launching the Sephora Breast Cancer Awareness Pop-Up Travel Brush. The brush, which retails for $8, is cased inside a sleek mirrored compact. Sephora will donate 100 percent of the proceeds to the Susan G. Komen Breast Cancer Foundation.

The Arden Breast Surgery massage is in its second year at Chicago, Washington, D.C., and New York City divisions of Arden Red Door Spas and Chicago branches of Mario Tricoci Spas. The massage is said to increase mobility, soothe post-operative pain and reduce scar tissue, swelling and edema. While the massage itself, at $80 for a 50-minute session, does not directly benefit any breast cancer charities, Arden is releasing a series of retail items through its Unlock the Cure program that will go to cancerandcareers.org. Arden’s beauty offerings are an Elizabeth Arden Red Door Revealed Gift Set that includes Red Door fragrance, body lotion and a shimmering body powder brush for $46.50 and Pink Ribbon nail polish at $8. Also benefiting Cancer and Careers this month are a pink ribbon lapel pin retailing for $3 and a scented pink candle for $6.

New mass market company e.l.f. is following in the footsteps of more grown-up companies by donating 20 percent of sales of its Shimmering Facial Whip to Win Against Breast Cancer during the month of October. WINABC strives to provide aid and create awareness among victims without health care and from low-income backgrounds. As part of their BCA month efforts, e.l.f. company president and founder Scott Vincent Borba and Elizabeth Mullen, founder/president/chief executive officer of WINABC, will be visiting breast cancer patients at inner-city hospitals this month with makeup care packages.