Temperature checks for customers and plastic visors for retail staff are among new safety protocols adopted by Australian beauty retailer Mecca Brands as it reopens its 109 stores following COVID-19 shutdowns.

As the U.S. and Europe start the long process of reopening a blueprint for what high-touch beauty retail looks like, the new normal is emerging in Australia, where the government was able to curb the spread of the virus relatively quickly.

Mecca commenced a staggered opening of stores on April 24, roughly four and five weeks after closing its 97 Australian and 12 New Zealand stores, respectively, standing down all 4,000 staff, who were paid a fortnight’s company-subsidized COVID-19 leave. A Call & Collect service for those unwilling to come into store also launched April 24.

At presstime, over two-thirds of stores had reopened, with the remainder due to follow over the coming weeks. In-store services, starting with brows, will recommence on June 1.

Mecca’s customers are returning to a markedly different in-store experience.

Observing not only government-mandated COVID-19 safety measures for the beauty sector, which include keeping attendance records for all customers, staff and contractors, the company also canvassed independent advice from Don Campbell, professor of medicine at Monash University, and has capped a maximum occupancy in store to one person for every six square meters.

Armed with contactless digital thermometers, Mecca retail team members — whose own temperatures are checked prior to every shift -— take customers’ temperatures before they enter each store. The company reserves the right to deny entry to anyone with a temperature exceeding 37.4º Celsius. 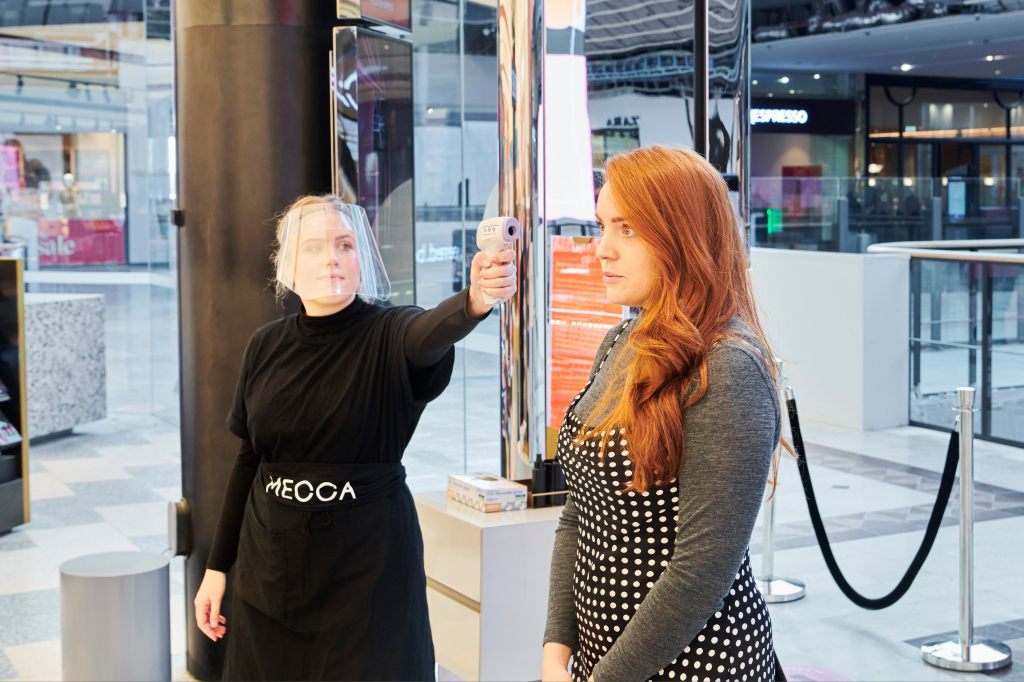 A customer at the recently reopened Mecca Highpoint store in Melbourne has her temperature checked by a retail team member in a full-face plastic visor, part of Mecca Brands’ new COVID-19 safety plan.

Hand-sanitizer units are stationed at the front of store, point of sale and throughout the floor; a beauty “concierge” is assigned to escort every customer throughout the store, and there is a no-touch service policy.

Other retail team staff, dubbed “Hygiene Heroes,” roam stores throughout the day to clean and re-clean all surfaces, including back of house.

“We said to Professor Campbell, ‘What are the greatest [safety] measures that we can take?’ and he gave us a list and we committed to undertaking all of them” said Mecca Brands chief executive officer Jo Horgan. “There was a lot of debate internally about temperature checks for customers early on. But we thought well, you know, what do we feel that customers would desire, faced with this environment? So we’ll go with temperature checks.”

Campbell’s recommendations also included the use of face shields, similar to those used by health-care workers.

After an initial order of 1,000 custom-made shields, Mecca is currently trialing them in six Australian stores, with a view, said Horgan, to rolling them out as part of its standard uniform. An additional 20,000 shields are on order.

In New Zealand, where the population is five million, only staff performing in-store services will wear face shields. The country has registered 1,154 cases of the virus and 21 deaths. Australia, with a population of 25 million, has registered 7,114 cases and 102 deaths. 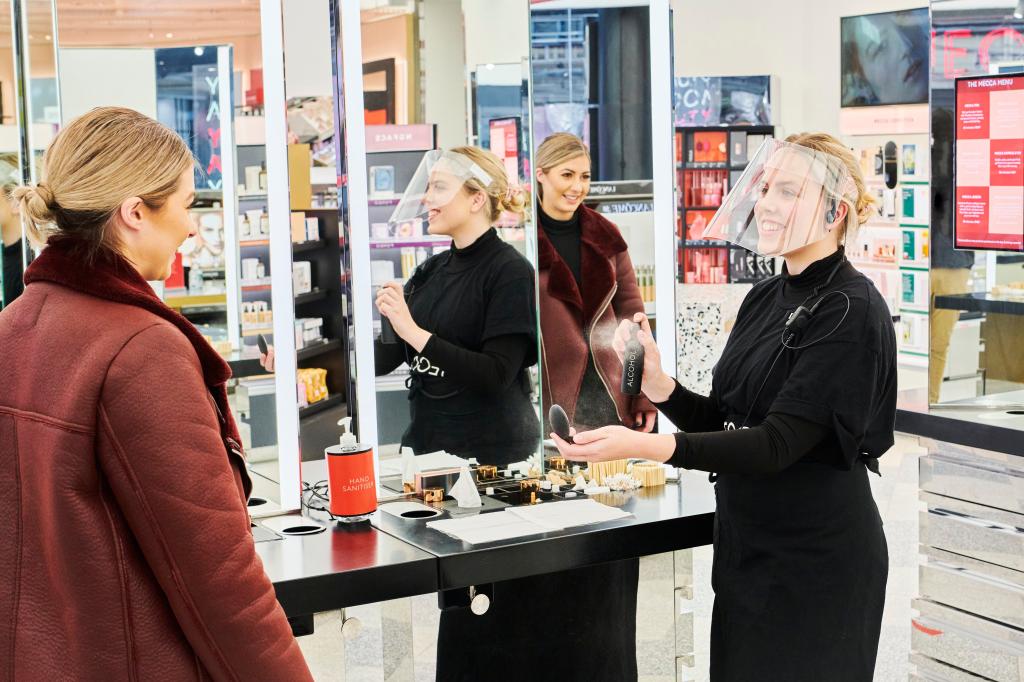 A Mecca Brands retail team member in full-face shield serves a customer at the Mecca Highpoint store in Melbourne.

Lockdowns precipitated a record 17.9 percent retail sales decline in Australia in April, about 5.4 billion Australian dollars or $3.5 billion at current exchange, according to preliminary Australian Bureau of Statistics figures.

Horgan declined to discuss her online figures, other than saying the division “punched above its weight” during the store shutdowns, launching a flurry of initiatives to supercharge its digital efforts.

Virtual services, where customers make a booking for a virtual appointment via mecca.com.au, were fast-tracked and launched on March 27, three days before the Australian stores shuttered.

Free of charge and lasting anywhere from 15 to 45 minutes, the concept sees customers connect via FaceTime to a retail team member located inside a Mecca store, who walks and talks them through the products. During the shutdowns, 12 closed stores — which Horgan calls “light, dark stores” — were designated for the purpose.

“We had the capacity for 1,500 [virtual] services a week and we had an extraordinary response” said Horgan. “So many customers said, ‘This is my new normal for when I want a service.’”

Virtual hosting — where customers chat live to a team member in a nearby store in real time via a pop-up chat box on mecca.com.au — launched on May 12.

Both initiatives have driven “significant” business according to Horgan.

To meet online demand, the company’s 15,000-square-meter distribution center near Melbourne’s Tullamarine Airport pivoted to a 24/7 basis, with all deliveries switched to priority shipping. The company split staff into teams and staggered start times, mandating gloves and temperature checks for all staff, contractors and delivery drivers. Hot water was plumbed in to accompany the installation of portable toilets and demountable lunch cabins, to ensure staff segregation, with the regular kitchens closed and cleaning upped.

As for Mecca’s ISO beauty sales, while the color category has been challenging, according to Horgan, the company has seen an “extraordinary” shift to skin care during COVID-19, with the hair category “going through the roof” and upticks in body, home fragrance and candles, she said. 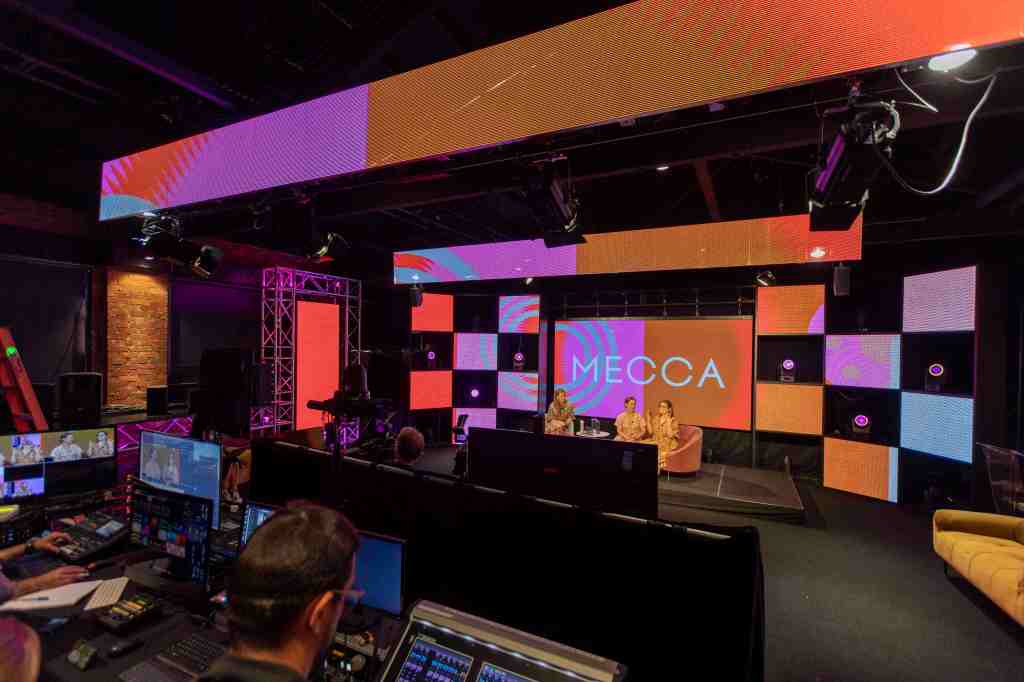 The Mecca TV studio, located in Richmond, Victoria, which was set up at the beginning of the COVID-19 crisis.

To drive engagement, the digital team tripled its content output during COVID-19, launching a new mecca.com.au microsite called Mecca Live as a content hub, as well as a new initiative called Mecca TV, complete with its own professional-look TV studio that was set up near the company’s support center in Richmond, Victoria.

The latter has served as an in-house education channel, broadcasting interviews and advice to all 4,000 team members on a weekly basis, and a live broadcast studio which has seen brand founder interviews and panel discussions livestreamed to Mecca’s social media audience on Instagram and Facebook. A new Facebook community group called Mecca Chit Chat and Mecca TikTok were also launched.

Weekly visits to the mecca.com.au grew 400 percent during the crisis, with visitors spending 30 percent more time on the web site, the company reports.

Horgan declined to speculate on the hit COVID-19 would take from Mecca’s fiscal 2020 sales. To qualify for the federal government’s six-month wage subsidy scheme JobKeeper, however ⁠— in which Horgan confirmed Mecca Brands is participating ⁠— businesses with a less than 1 billion Australian dollar or $653 million turnover must demonstrate a reduction in revenue of at least 30 percent over a minimum one-month period since March 1.

“I think that the fact that Mecca is an Australian, private, agile company, has helped us pivot super quickly ⁠— we’ve had to adapt and we have,” said Horgan of the coronavirus crisis.

“Like everybody, in April, when we were hardest hit, we were scrambling to pivot and react to the new market conditions and when you close 109 stores obviously there’s a significant impact from that. As we’re coming to May and we’re opening stores and we have online performing very well, we feel that we can see a road to recovery that wasn’t immediately evident when this all started.”