The Bold and the Beautiful

The fear factor rose during the month-long run of Fall 2020 fashion shows in Europe, but runway beauty stayed strong. Here, key trends from the catwalks of London, Milan and Paris.

By Jennifer Weil and Sandra Salibian on March 13, 2020
View Slideshow 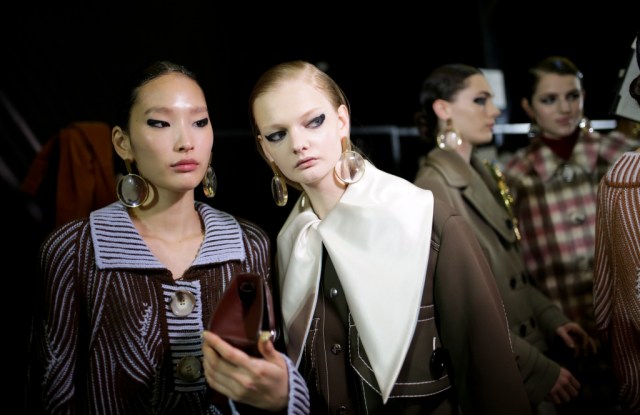 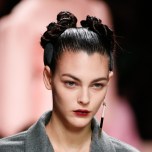 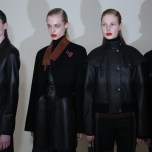 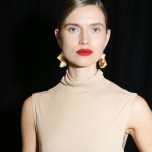 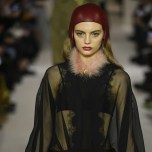 “The inspiration is a continuation of the embellished eye theme that we’ve been doing for the last couple of seasons,” she said, referring to flowers for spring and the more recent show with H&M, “where all the girls had these really cool kind of punky, edgy, crystal things on their eyes. Now, we wanted to do it again and make it really feel like high-end, luxury jewelry that you could wear on your face.”

At Off-White, Fara Homidi opted for a flourish of fluorescent pink mascara as a detail on some models’ lashes. “[It’s] from the mid-lash, pulling outward and a little bit of fluorescent mascara tacked onto [a] part of the lid, so that as you’re looking in every direction you’re getting a hint of fluorescent,” she said.

At Erdem, Lynsey Alexander reinterpreted Cecil Beaton’s work and nodded to the recurring silver theme in the fashion collection by applying on models’ eyelids silver leafs that were then set and broken with a brush to create delicate, fragmented patterns.

Thomas de Kluyver pressed and cracked thick red-, black- and pink-toned foil on the eyelids of 10 models at Simone Rocha.

“I was looking at the way Simone adds pops of colors within the collection and approached the makeup in the same way,” said de Kluyver, who was also inspired by Irish artist Dorothy Cross’ work.

Tom Pecheux applied black, dusty-pink and burgundy threads around models’ eyes or on their upper cheeks. He cut 12-inch-long threads, rolled and pulled them to make a haphazard motif that was then set with hairspray and affixed on faces with eyelash glue at Antonio Marras.

“We’re creating a secret language written with a thread,” said Pecheux, explaining he was inspired by Sardinian artist Maria Lai. “She used to write with thread, and it totally reminded me of the way Antonio [Marras] also draws and writes….So I wanted to create a makeup that’s almost a secret alphabet between them.”

Eyes had it, as well, at Valentino, Guy Laroche, Stella McCartney, Lutz, Paula Knorr and Halpern. 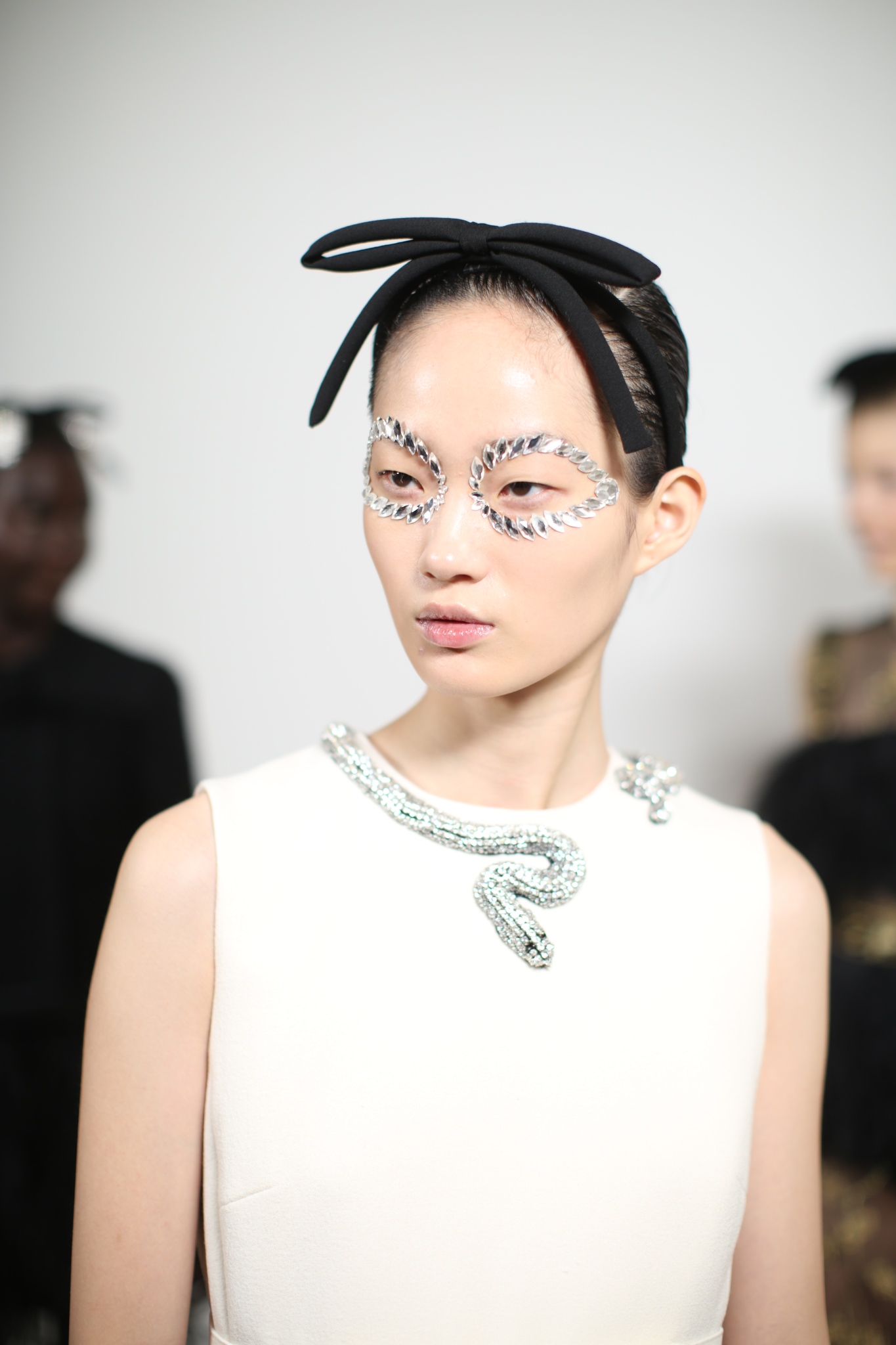 TREND: OUT OF THIS WORLD

Some beauty looks took on an otherworldly air for fall 2020.

The hairstylist Duffy said Haider Ackermann gave him the artist Constantin Brancusi as the reference point for the show’s beauty look.

“They are very pure shapes, very defined graphic lines, which I think are resembled in the clothes,” Duffy said. “So for the head, what I wanted to do was give you this idea of the shape, the form that leads into another form that maybe jolts slightly, but has a beauty, a purity, a fluidity [although] there is a disconnect with them slightly.”

Duffy worked with balloons, papier-mâché and a lot of hairspray for the gravity-defying coifs. He said: “The hairlines are very, very short. We ended with a small dome. It was an egg, with an edge cut off. Everything is quite aggressive, but perfect, pure and simple.”

Lynsey Alexander said Ackermann wanted models to seem like statues. “It’s very alabaster,” she said of the look. “We’re going quite pale with skin…so everything is very luminous and light. And then we made bespoke gloss. We’re painting it all over the eyes, a little bit on the cheekbones and [applying] a nude lipstick. Basically, we’re pushing back all the features, so there’s no warmth in the skin. It’s very ethereal and silver.”

Over at Yohji Yamamoto, Pat McGrath said the creative director “loved that there would be impressionistic individuality expressed in abstract black lines on satin, matte skin.” For the show, she drew squiggly black lines over one eye of each model and also painted a small section of their lips black.

At Thom Browne, Souleiman had in mind the fashion show while creating the hair look: black bobbed wigs partially covered with black latex. He explained there was “duality, couples going on together, wearing an identical outfit. I wanted them to almost be mirror images of one another, so we did wigs that are mirror images. There’s this really almost Space Age, kind of illustrative abstract gentleman’s haircut vibe going on. Everything’s really loaded [there, with the latex], and then there’s natural hair in the back.”

Isamaya Ffrench created the makeup look, which involved blocking models’ brows and making their skin ultra-sculpted, with a matte finish. In the center of their lips, she dabbed a bit of gloss to mirror the hair’s shine.

He said the hues of the voluminous coifs “took inspiration from the colors of macaroons, making everything a little more punk.”

Julien d’Ys splashed colored paint and metallic glitter all over the gelled hair and face of models at Marni.

For Antonio Marras, James Pecis masterminded an intricate look, sewing extensions together to create “a piece of fabric of hair” with colored stitching popping up. He wrapped these panels around models’ heads, after pulling their hair back into high ponytails woven in rope braids around elastic threads, and blended the two parts with twists and turns resulting in a labyrinthine, sculptural updo. 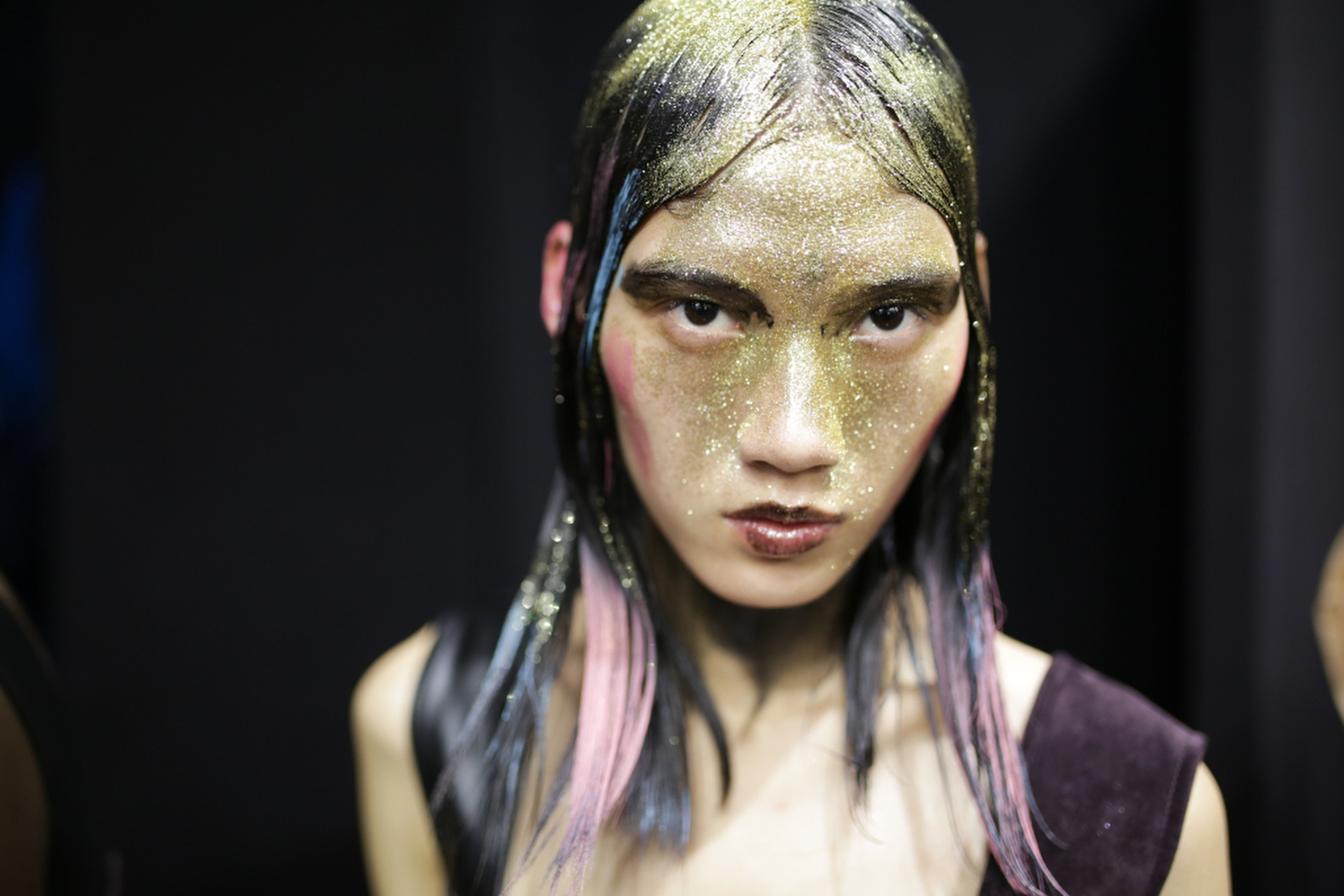 Grease was the word for fall 2020, as many a model had their hair slicked back on the catwalks.

“There is not a lot of romanticism in the hair at all,” said Anthony Turner at Rochas, explaining the house’s creative director Alessandro Dell’Acqua wanted the models to feel empowered, strong and confident. “It’s very strict, serious, with a very strong side part, combed over using a wide-tooth comb. You get the comb marks, so it feels very much like these girls mean business.”

At Giambattista Valli, Paul Hanlon sought to juxtapose the sweetness of the bows and veils, as well as the heavily charged clothes, being worn by models with the hairstyle’s toughness. As such, he gave models’ tresses a wet look using L’Oréal Paris Studio Line gel and a touch of oil. Hanlon combed hair back — again with the comb marks remaining apparent — into an imperfect bun. A bit of gel was wiped on hair just before models hit the runway.

At Prada, Guido Palau ironed tresses into a graphic coif. After applying Redken No Blow Dry Hair Cream, he brushed models’ hair from faces, added extensions to mask layers and topped the style off with metal headbands, giving a sci-fi halo to the “futuristic classicism” of the look.

“It’s severely simple…almost like a computer [made] idea of hair, like a drawing, very linear,” Palau said. “It has a little nod to sort of naïveté, but strength at the same time, like a sort of weird classicism to it.…It has that slightly strange normality, which is a very Prada thing.”

The Tigi Power Play gel used on models’ tresses at Marco de Vincenzo was meant to evoke the fashion collection’s bright textures. Massimiliano Mattei wet, middle-parted and slicked back models’ hair before dividing it into two sections to shape two small buns at the nape. He applied gel in abundance for an extra-shiny, lacquered finish. 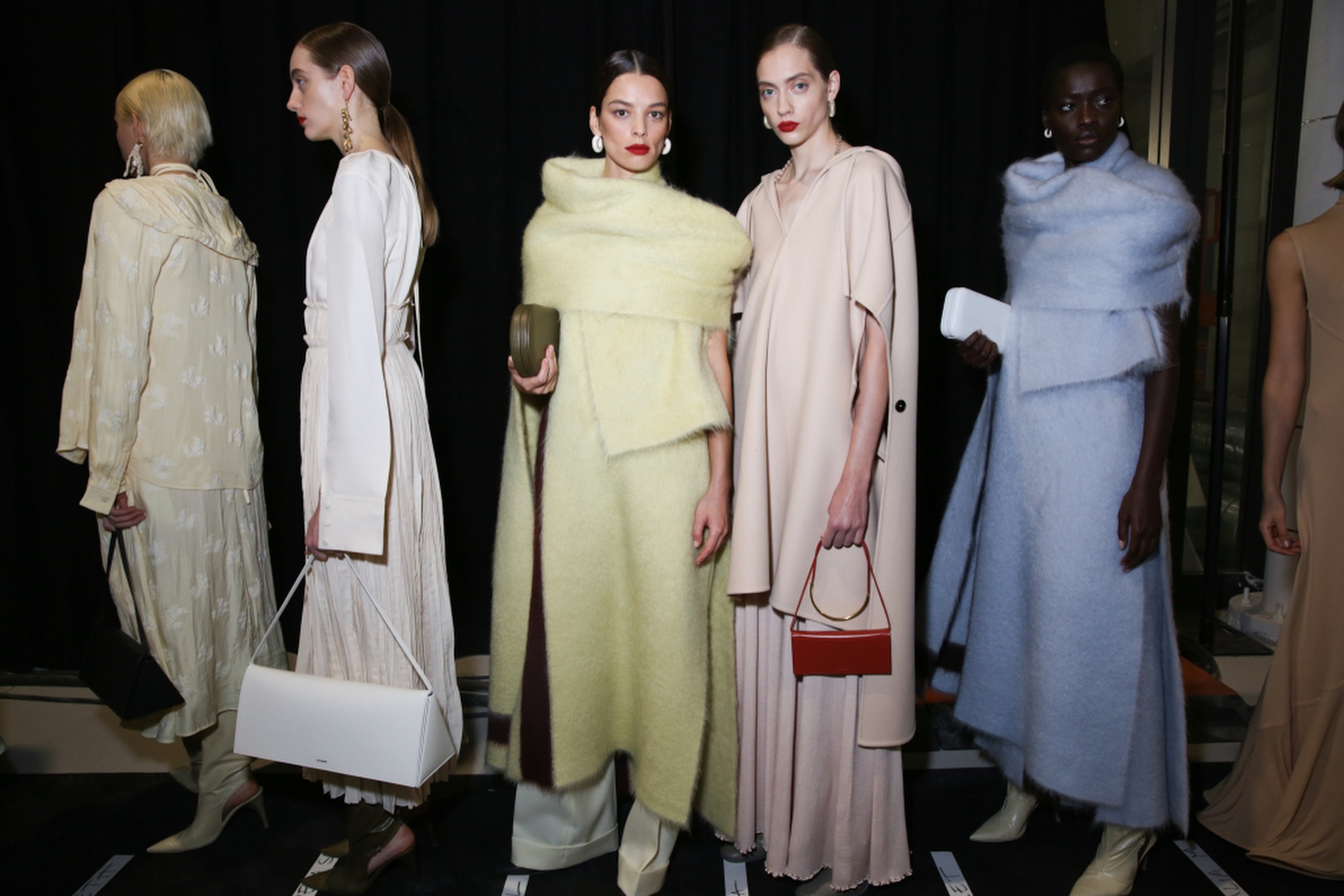 Fall 2020 wasn’t just about supernatural looks — there was a fair share of bold-colored lips that popped on the European runways.

“We’re doing a bit of an ombré fade from the corners of the lips — different colors for different girls, depending on what they’re wearing. It’s real individualization,” said Fara Homidi at Mugler. She explained that hue-wise, her team was using oxblood red, a black and a dark brown.

“It’s a detail that’s somehow strong and sexy at the same time,” continued Homidi, adding models’ skin was to look dewy on the high points of their faces.

“It’s quite a dangerous red and, like a varnish, it gives a PVC finish to the lips,” she said.

At Fendi, Peter Philips gave models a dramatic, prune-toned lip with a smudged effect. He applied Diorific 991 Bold Amethyst lipstick on the inside of their lips, then extended the color and softened its edges with a Q-tip.

“They showed me a certain shoe, and I thought that would be a nice color reference,” said Philips, adding the hue was applied like a stain. “So that it looks like the lips [you have] after kissing somebody or having a bit of wine — or both,” he said with a laugh. 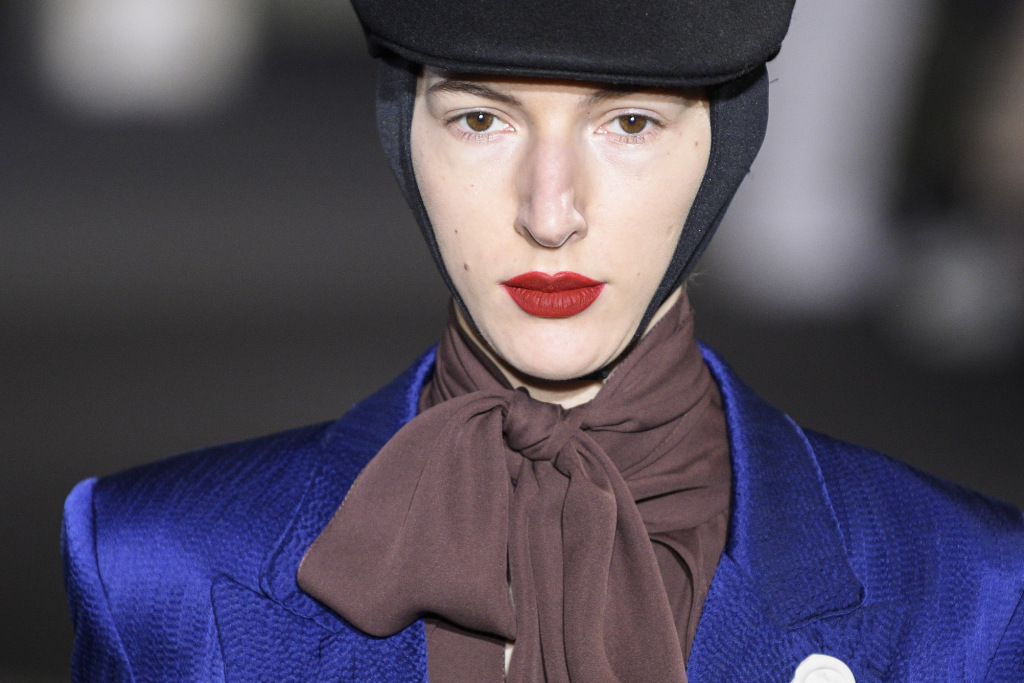 Peter Philips, creative and image director for makeup at Dior, crafted three different eye makeup looks for models after the house’s creative director Maria Grazia Chiuri gave “Seventies intellectual” as a cue. One iteration had a take on a cat eye, with black lines extending from the outer corner of peepers.

“It’s about pigment in motion, ultra-femininity with a little masculinity inside,” said Pat McGrath of the futuristic cat eye she created at Prada with an iridescent gradient effect.

Lynsey Alexander at Missoni drew a graphic, conceptual black line starting from models’ lower lash line. She described it as “a little flash of black line, which for me is a little bit Japanese-y…and a nod to the Nineties.”

At Moschino, Tom Pecheux used a black pointy eyeliner to telegraph “a little bit of toughness” and counterbalance the Marie-Antoinette-inspired rosy cheeks and peachy-colored eyelids.

“I didn’t want to bring too much eccentricity in the makeup because I don’t want the girls to become caricatures,” he said.

Dominic Skinner was inspired by the rounded toe of a shoe in the Marco de Vincenzo collection for the chubby take on a cat eye he crafted there.

“The end result is playing on this idea of a young girl dressing up as her mother, but she’s not allowed makeup. So she’s gone through her pencil case and got a marker pen to draw the eyeliner on,” Skinner said. 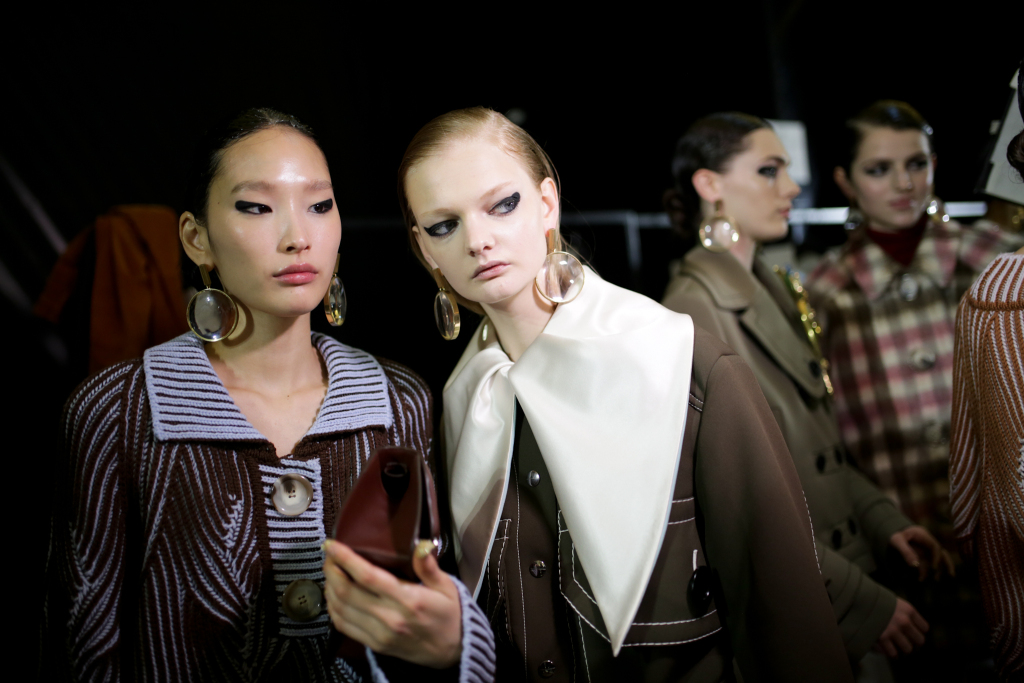