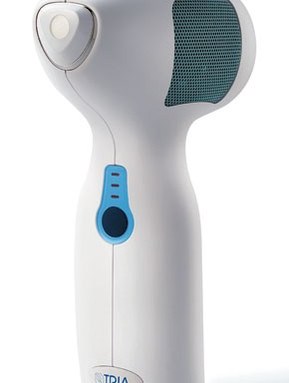 The hairless patch is a result of countless demonstrations of Tria, the at-home laser hair removal device created by Grove, co-founder, president and chief executive officer of SpectraGenics, a company that more than a decade ago developed the first diode-laser technology used for professional hair removal.

For its part, the $995 Tria is the first laser hair removal product cleared for direct-to-consumer sale by the U.S. Food and Drug Administration, according to the company. It’s also one of a trailblazing guard of FDA-approved, personal-use cosmetic devices marching onto the market. A handful of others include the skin-toner NuFace and the acne-fighting tool Tanda.

Maha Sherif, president and ceo of Valencia, Calif.-based Ageless Beauty Corp. — the maker of $225 Marvel-Mini designed to fight acne and fine lines — declared “the race is on” to bring devices to market.

At SpectraGenics, the Tria, which received FDA approval in February, is slated to roll out to dermatologists’ offices next month and to Bergdorf Goodman, Studio at Fred Segal and a dozen Bliss Spas in late summer.

Its price may be as jaw-dropping as its use, but mention it to a group of women and you can almost hear the mental math in their heads.

“If it was safe, easy to use and guaranteed to work than, yes, I’d pay $995 for it,” said Raeka DeLong, a New York beauty devotee who recently spent $900 on a professional laser hair removal treatment. “Actually, I’d pay up to $2,000 for it.”

After all, as Kevin Applebaum, SpectraGenics’ chief commercialization officer, noted, women spend roughly $800 to $900 on waxing services a year, according to the company’s research. Professional laser hair removal, he estimated, runs from $1,000 for the underarm area to $9,000 for the legs.

“The fact that women tolerate the pain and inconvenience of waxing showed there was an opportunity,” said Applebaum. “There’s clearly pent-up demand for its benefits.”

The firm estimated that the current global market for professional laser hair removal is $5.5 billion in size, and that waxing is a $4.5 billion business globally.

Use of the Tria is limited to those with light to medium skin tones and dark hair. In fact, users cannot activate the product if their skin color is outside this range. Dark brown and black skin absorb too much of the laser energy, which can cause skin damage. If the skin sensor registers suitable skin tone, a green light will appear and unlock the laser. Applebaum said a full course of treatment requires six or seven sessions at three- to four-week intervals.

Rather than threaten to take business from dermatologists, the Tria will likely drum up consumer interest in the category, said Bryn Mawr, Pa.-based dermatologist Eric Bernstein, who specializes in laser services and serves as a spokesman for Tria. “You cannot stop a field-changing technology. You have to embrace it,” said Bernstein, who estimates that laser hair removal accounts for about 50 percent of his practice. He plans to begin selling the device next month.

Bergdorf Goodman, which will begin selling the device this fall, has already had success with cosmetics, including the $1,595 Wellbox — a device designed to tone muscles, stimulate blood flow and alleviate cellulite — and the $195 Clarisonic skin cleaning tool, said Pat Saxby, vice president and divisional merchandise manager for cosmetics and fragrance at Bergdorf Goodman. Referring to Tria, Saxby said, “It’s about the size of a small blow-dryer so it’s very portable. But it’s also a very powerful machine.” She added, “My customers want things that really work. This is very easy, but also a very effective way to take care of” unwanted hair.

Another recent entry, dubbed NuFace, which nabbed FDA approval in December, aims to tap into a growing trend in spas to combine facials with low-level electro-currents to firm facial muscles. Bliss Spas began selling the $379 device in 2006, and incorporates it into certain spa services, said Tera Hawkins, co-founder of the Carol Cole Co., maker of NuFace. Sold as a kit, NuFace can be used every day and requires a simple 5-minute regimen, said Hawkins. First, users cleanse the skin and apply Derma-Gel before sliding the device over the face’s contours. They then remove the gel and spray the Optimizing Mist. The FDA’s stamp of approval gives dermatologists the go-ahead to sell the product as well, noted Hawkins.

Pharos Life Corp. has introduced its at-home, acne-fighting light therapy device called Tanda to roughly 30 dermatologists’ offices since receiving FDA approval in August. The $395 device, trumpeted by New York-based dermatologist Melanie Grossman, is available by prescription only and is billed as the first at-home, FDA-approved LED device for acne and aging skin.

Johnna Allen, marketing and sales director for Pharos, said, “It’s a great adjunctive therapy” in between in-office treatments. She added that the portable, battery-operated gadget is designed to be used for a 3-minute stretch, two times a day. The technology is designed to use light to stimulate skin cells, increasing skin rejuvenation and safely destroying acne-causing bacteria.

The modular device has two interchangeable heads: a blue light to kill bacteria and a red light said to stimulate collagen and lessen fine lines.

Allen said the company is considering developing additional applications, including an anticellulite function. The device is sold through doctors’ offices in Canada, and also at Holt Renfrew, although there are no plans for U.S. retail distribution.

Ageless Beauty Corp. introduced its $225 Marvel-Mini last summer, a handheld light therapy device for acne, fine lines and wrinkles and hyperpigmentation, and is already set to replace it with the $295 Evis MD Platinum late this summer. The company aims to launch the device with FDA approval, which it expects to receive this June. The Evis MD Platinum, which Ageless Beauty’s Sherif reported is three times as powerful as the Marvel-Mini, is supposed to be used twice a week for 12 to 16 minutes each time compared with three times a week for 24 minutes each time for the earlier model. The Evis MD Platinum will be available at Nordstrom, Bliss, Bloomingdale’s and possibly Macy’s, as well as via TV. Ageless projects its sales will reach $25 million to $30 million this year.

“This is going to be like the iPod,” said Sherif. “You just bought one five, six months ago and then you need new ones. The efficacy is getting higher and basically the prices are getting lower.”