The Top 5 Fall 2017 Beauty Trends From the Couture Runways 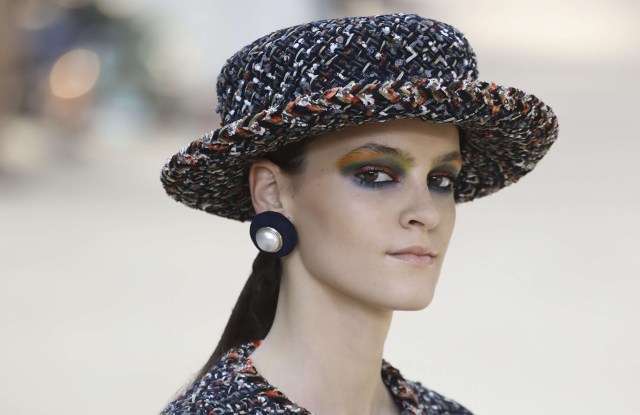 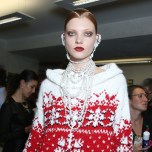 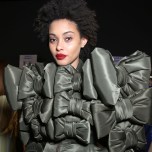 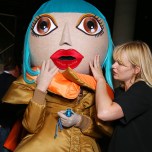 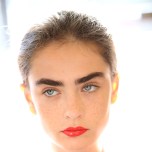 Hairstylists and makeup artists brought their A game to the recent couture shows in Paris, where the looks ranged from the chicly grounded to the ethereal. At many shows, there was a decided romance in the air, whether with a cascade of waves offset with a jeweled crown or silvery eye highlights for an angelic effect. At others, the look was minimalist and modern, punctuated with an exaggerated element such as an elongated brow. And, of course, couture being couture, there were wild flights of fancy at Maison Margiela Artisanal and Jean Paul Gaultier, from 3-D mouths to hair highlighted with gold, that provided incandescent moments of beauty. Here are the top five beauty trends looks for  eyes, lips and hair. See the gallery for more photos.

A subtle sweep of silver on the lid, a hint of highlighter in the inner eye — the look was all-out ethereal at many shows. At Rodarte, makeup artist James Kaliardos highlighted the romanticism of Odile Gilbert’s baby’s breath-bedecked hair, while at Elie Saab, Tom Pecheux added inner eye highlights to give the “Game of Thrones”-inspired collection a fairy-tale aura. Call it a heavenly new direction for beauty.

Harsh lines are out. Whether working in tones of smoke or brighter shades like ochre and saffron, makeup artists melded colors together seamlessly for a sophisticated and sexy effect. From a mosaic of color created by Tom Pecheux at Chanel to Linda Cantello’s sultry look at Armani Privé, the effect was one of seduction. “Mr. Armani wanted a very mysterious woman, so we wanted to do a shadowy eye that had no hard lines,” explained Cantello, Giorgio Armani Beauty’s international makeup artist. “So it’s this kind of air of mystery. It is like a veil of color.”

The Evolution of Red

John Galliano said he was inspired by the idea of proposing a “new glamour” for his collection for Maison Margiela Artisanal, starting with the notion of distilling glamour to its most obvious markers. He came up with 10, among them, a red lip. And because Pat McGrath is Galliano’s go-to makeup artist, this was no ordinary red. Using her new matte lipstick collection, Lust Matte Trance, as a starting point, she created fantastical looks that riffed on Galliano’s theme. Elsewhere, red was equally as popular if not as dramatic. At Giambattista Valli, Val Garland tapped into a different side of the color. “In terms of makeup, you see this beautiful skin quality; it is very innocent — childlike, even,” she said of the look. “But then you come to the mouth and the mouth is like a rosebud. It’s like she’s been biting peonies. And we put a lot of gloss over the top, so it just looks quite sexy at the same time.”

In the land of perfection that is couture, hair with a more natural feel provided a welcome contrast. Textured and flowy, with pieces allowed to poke out here and there, styles at Valentino, Dior and Zuhair Murad were romantically disheveled. At Dior, hairstylist Guido Palau opted for a simple ponytail with a windswept texture. “There’s a romance to her,” he said, referring to the models. “She’s traveled, so it’s a bit disheveled.” Palau worked tresses using different sized curling irons. “It should feel easy and cinematic almost, like they are caught in a moment — not perfect,” he said of the style, where hair was parted to a side with fingers. “It feels very womanly, easy and sophisticated.”

For their Paris debut, Proenza Schouler opted for beautifully minimalistic makeup, with artist Diane Kendal sketching an elongated brow and little else on models’ faces. They weren’t alone. A minimal face, often with just one feature highlighted, delivered maximum impact, be it with a strong lash at Fendi or a cloud of white on the upper third of the face at A.F. Vandevorst.