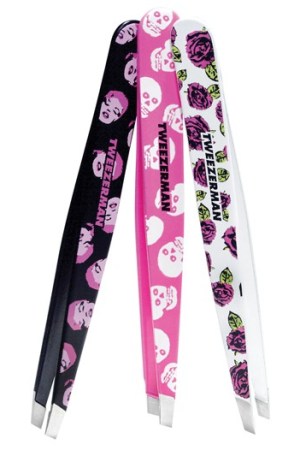 Matrix Re-brands, Broadens in Appeal to More Diverse Consumer Base

In one of her latest licensing deals, Betsey Johnson has partnered with Tweezerman on a line of three Betsey Johnson Designer Series slanted tweezers.

The items, priced at $25 each, will be introduced at the designer’s boutiques and Sephora beginning Sept. 1. The tweezers each have a different design: white with graphic pink Betsey rosebuds, neon pink with white Betsey skulls and black with the so-called Betsey “babe.”

It’s a busy month for the party girl: She held a 68th birthday bash at her SoHo boutique in Manhattan Aug. 11, where a number of “Betsey girls” clad in black-and-white-striped body-con dresses and platinum wigs, bounded about the crowded store. The festivities culminated with a seemingly impromptu photo shoot, as the designer sat on — and slid off — the hood of a pink stretch Mini Cooper.

She then climbed into the limousine and rolled down Wooster Street, waving out the window. Her birthday dinner destination? La Grenouille.

On Tuesday, the store will host another soiree — for the launch of the tweezers.

Boss Orange is heading into the sunset.

P&G Prestige Products’ Hugo Boss Fragrances brand will introduce Boss Orange Sunset at the end of September, a flanker to the 2009 launch of Boss Orange Woman. Actress Sienna Miller will continue her role as the face of the line.

The new fragrance, an eau de toilette, features bergamot, mandarin, white flowers and rose, atop base notes of sandalwood and vanilla. Sunset’s bottle replicates the faceted glass stack design of the original scent — this time with an orange ombré effect.

The transaction, worth 700,000 euros, or $901,025 at current exchange, is expected to close by Sept. 20. The acquisition of the Schiapparelli brand and Nutritionals stands to help Paglieri consolidate its position in the beauty industry.