Ido Leffler is sending his Yes to Carrots personal care brand off into the wild blue yonder, with a debut on Virgin America airlines at the end of the month. 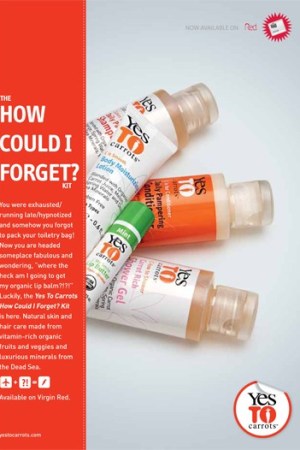 The carrot has sprouted wings.

The irrepressible eco-entrepreneur Ido Leffler is sending his Yes to Carrots personal care brand off into the wild blue yonder, with a debut on Virgin America airlines at the end of the month. The company will sell travel bags, aptly called the How Could I Forget kit, aboard all of Virgin’s airplanes for $10 apiece.

The kit will contain seven products, including a shampoo, a conditioner, a shower gel, a lip butter, a body moisturizing lotion, a night moisturizing cream and a bag of Vermont mints. The kits will be advertised in the airline’s in-flight catalogue and the products contain some of the company’s signature ingredients, like carrot juice and Dead Sea minerals.

The project is Leffler’s maiden flight into the travel retail arena. During an interview in New York earlier this week, he said Virgin America carries 100,000 passengers a month on its domestic U.S. routes.

He may be looking into the sky, but Leffler’s feet are firmly planted on the ground. His budding garden of brands, which has been expanded to include Yes to Cucumbers and Yes to Tomatoes, is about to sprout a line for infants, Yes to Baby Carrots. Leffler said he’s thinking about a launch in the new year and the line will include five products, including a 2-in-1 shampoo and body wash and a diaper cream.

The distribution will also be expanded. At the end of October, the company will enter Whole Foods with its range of brands. Initial plans call for opening the 15 Whole Foods stores in the Pacific Northwest. Distribution now includes Duane Reade, Target, Walgreens, Safeway and Rite-Aid.