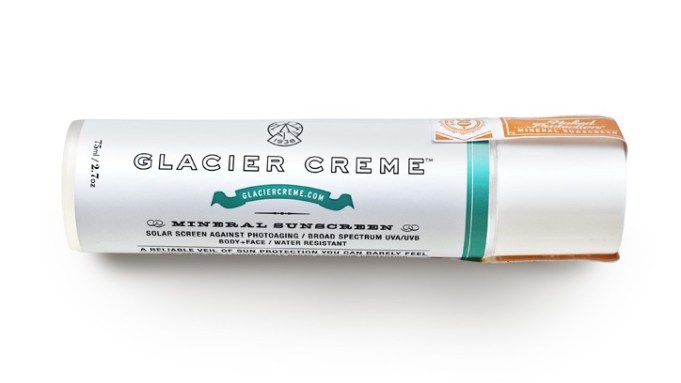 A new sun care brand, called Glacier Creme, that was launched online this summer and has planned the addition of new products for next year, aims to build upon a toehold at several independent boutiques.

The brand, which made its debut when glaciercreme.com went live in early July, consists of a 75-ml., zinc oxide-based mineral sunscreen called Naked Protection. The SPF 30+ product employs a 20 percent concentration of zinc oxide and is priced at $25.

Founder Aaron Cohen said it was his aim to come up with a sun care item that bridges the gap between budget drugstore brands and high-end, “pharmaceutical” sunscreens.

“I wanted to create a line of premium sunscreens that represented a cool, updated style, using highly effective, high-performance ingredients.” he said. “I started to focus on micronized zinc oxide — that’s the foundational active ingredient. It’s known for providing the best broad spectrum protection against UVB and UVA [rays].”

He added that he wanted a product with “cosmetic elegance. It has a powdery feeling on the skin.”

Cohen, who is in real estate development, spent a year researching sunscreen and worked with a chemist to reach the final formulation, which also includes tea and sunflower extracts, polyphenols to fight free radicals, shea butter and vitamin E.

He noted the theme for the brand this year is beach gypsies, “living an exotic bohemian lifestyle all over the world.” The brand attempts to capture this peace-and-love positioning with imagery on the Web site — which features a video with visuals that say things like “A curious band of people.”

New items planned for next spring-summer include a facial sunscreen and an after-sun lotion.

The distribution strategy, according to Cohen, is to focus on independent boutiques initially then on larger beauty stores.

He contended it is important to build the product line in order for it to be considered by beauty retailers like Sephora, Douglas, Blue Mercury or Zitomer pharmacy in Manhattan.

“They don’t want to take a risk on one sku,” said Cohen. “But, we’re talking. Our customer shops there.” He added that several stores on the Jersey Shore carried the brand and a few boutiques in Miami are to carry it this winter.

Cohen explained the name of the brand dates back to 1938, when chemistry student Franz Greiter experienced sunburn in snowy conditions near the Swiss-Austrian border. He subsequently developed what’s said to be the first sunscreen, naming it Glacier Creme.