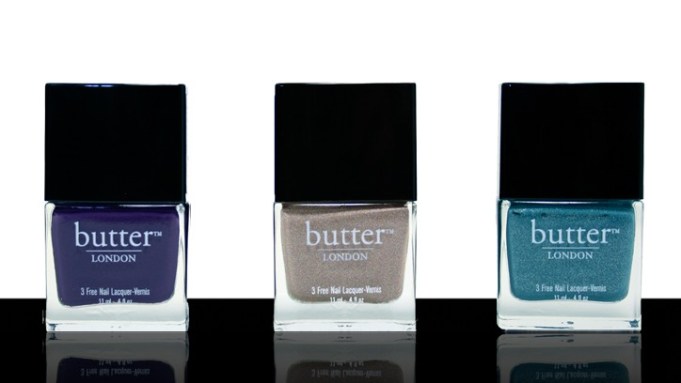 Butter London is getting easier to find.

The Seattle-based nail polish brand entered seven Nordstrom doors this month in anticipation of further expansion next year and launched end-cap displays at 30 Ulta doors last month, where it will roll out to another 160 doors in the spring.

Nordstrom is carrying Butter London’s entire range, which contains nail lacquers for $14, nail treatments for roughly $15 to $20 and lotions for $10, while Ulta stocks about 60 percent of the line.

“It is an affordable luxury, but to put our nail care in prestige is a big breakthrough,” Sasha Muir, the majority owner, chief executive officer and founder of Butter London, said of Ulta’s strategy to merchandise the brand in its prestige cosmetics department.

Before entering Ulta and Nordstrom, the five-year-old brand had been building a cult following through a limited retail network of boutiques and apothecaries and via its work for runway shows, including Alexander Wang, Vena Cava, Betsey Johnson and Victoria Beckham during New York Fashion Week earlier this month.

Consumer surveys conducted over the last two months by Butter London indicated to Muir that the brand was ready for distribution expansion. The surveys revealed that consumers responded positively to the brand, she noted, but were frustrated they weren’t able to conveniently obtain it.

“This year, our focus was on expanding into larger channels of distribution because the market is demanding it,” Muir contended.

She estimated that Butter London, which is in about 600 doors in the U.S., would increase its number of U.S. doors by between 50 percent and 100 percent next year. This year, she said, the brand’s sales have jumped 44 percent between the first and third quarters, and have risen 66 percent over last year.

The brand generates less than $10 million in annual sales.

To spearhead Butter London as it grows, Muir is on the hunt for a new ceo and plans to vacate the position as early as this year, although she will continue to be connected with Butter London in an advisory role, with a seat on the board.

“We are searching for a very experienced executive coming out of prestige cosmetics,” she said. “The nail care category is one of the strongest growers in the beauty industry right now. It is getting a lot of attention, which is very well deserved, and I think it is being taken more seriously.”

Previously, Vielhaber oversaw research as the head of global innovation of Symrise’s Scent & Care division, including a cooperative partnership with biotech company SCoutech and the development of numerous prize-winning cosmetic active ingredients.

The unit also has a new regional business manager; Ev Süss, who will be based out of Symrise’s corporate headquarters in Holzminden, Germany, will focus on promoting the company’s cosmetic ingredients in Europe, Africa and the Middle East. In addition, Süss will search for product development opportunities for Symrise Life Essentials unit via market analysis.