Shoppers’ tightfistedness may refute the Lipstick Index theory; some hot beauty items, like Nars lipstick in Hot Ride, are still selling out in stores.

By Molly Prior on September 4, 2009
View Slideshow 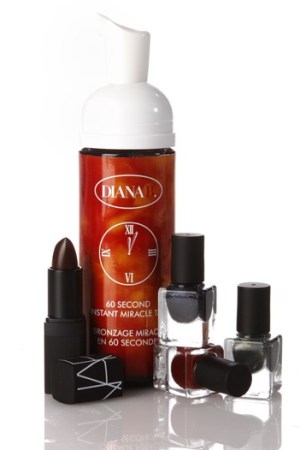 Shoppers’ tightfistedness may refute the Lipstick Index theory coined by Leonard Lauder, who said when the economy declines, lipstick sales rise. But even in this stubborn recession, retailers have begun to spot “green shoots” among the industry’s cracks, which split open almost one year ago.

Prestige beauty sales continued to slide throughout this year, declining 7 percent in the first half of 2009 to $3.7 billion, compared with the year-ago period, according to market research firm The NPD Group. June marked the 11th consecutive month of negative beauty performance.

“People are not walking away from the category, but they are being very careful about what they are buying,” said Karen Grant, NPD’s vice president and global industry analyst. Referring to the upcoming holiday season, she added: “Consumers will be making strict trade-offs about what to spend their money on, and it may be a cash purchase so they are really going to be discriminating.”

That said, retailers, too, have adopted a practical mind-set, altering their approach to merchandising and the ways in which they communicate value.

It may take a magnifying glass, but retailers also are beginning to spot product sales trends that indicate growth is ahead.

“In tough times, you have to treat each product category as a separate industry,” said Marla Malcolm Beck, founder of the Washington-based beauty apothecary and spa Bluemercury. Customers at Bluemercury are updating their staples. For instance, a new shade of Nars Cosmetics lipstick, called Fast Ride, along with Bobbi Brown’s reformulated Creamy Eye Pencils are nearly selling out. Sales of antiaging skin care products are also steady, with Darphin Stimulskin Plus Divine Lifting Cream, for $295, moving briskly.

Also surprising, Bluemercury’s spa services have held up well, which Beck pointed out was not the case during the last recession. “Now, it’s viewed as more of a mainstream necessity,” she said, pointing out that bikini waxing services are on the upswing.

Poor performers are premium hair and body care sales, which continue to struggle.

Beck said customers booked earlier than ever before for Bluemercury’s annual fall makeup event, which, in her view, offers women a good excuse to get out and socialize for free. “Any sort of event we are hosting is doing really well,” she said.

To entice shoppers in the store, Beck has begun cherry-picking items, such as MD Moms Baby Silk Babysafe Sunscreen Towelettes, from indie brands and displaying them at the cash register. The concept, which she dubs “fast fashion for cosmetics,” will continue throughout the holiday season. To prepare for the holidays, Beck said Bluemercury has increased quantities on “distinctive items at a good price” — naming a Nars Cosmetics lip gloss kit for $45 — and cut orders on items that smack of last year’s merchandise. “We are looking for newness.”

Beck declared Bluemercury is not interested in communicating value through pricing and discounts. For instance, Bluemercury successfully sold a $95 Trish McAvoy cosmetics kit by pitching it as an exclusive, not a value kit.

On the West Coast, Robin Coe-Hutshing, founder of Studio BeautyMix at Fred Segal, is looking for products with meaning to suit her customers’ moods. During what Coe-Hutshing prefers to call “the difficult period,” she said, “people never stopped shopping. But it’s become a question of needs versus desire. They haven’t stopped buying La Mer or luxury hair care — core maintenance products — but they did stop buying the frivolous purchases that add up to nothing.”

One brand nodding to the new consumer psyche is Le Métier de Beauté, which introduced tiny bottles of au courant nail lacquer shades, including purple, navy and green, for $15 each. “You can have your love affair with the color, which you know will be fleeting away,” said Coe-Hutshing of the miniature bottles.

“When you go through a difficult time with your customers and your business, you have to learn from it. I’m looking for meaningful products now,” she said, adding that multiuse products — namely, Beauté Cosmetics Liquid-Gel Stains for lips and cheeks — are a plus. Another item that consumers are gravitating toward is the $60 Diana B. 60 Second Instant Miracle Tan. The chocolate truffle-scented foam formula is designed to be applied in the shower and then rinsed with water. A sunless tan is said to appear one minute later.

Coe-Hutshing plans to merchandise a number of these “cult items” together in a special area called Studio Secrets, complete with commentary on each product.

Studio BeautyMix, as a rule, generally steers clear of traditional holiday kits, choosing instead to allow shoppers to put together their own gift sets, which the boutique then hand-wraps. Referring to her curator-driven merchandising philosophy, Coe-Hutshing quipped: “We live dangerously and it’s served us well.”

When will she know the recession has finally passed? “If people are really going to loosen up, they may buy a pomegranate body butter,” said Coe-Hutshing.

Shoppers Drug Mart’s upscale outpost Murale is seeing strong growth in skin care, boosted in part by younger customers seeking out dermatologist brands. “Skin care is now one of the steps in a person’s daily routine right up there with brushing and flossing,” said Shelley Rozenwald, president of Murale. “Gone are the days when someone considers buying a face product and had feelings of guilt because it was traditionally thought of as luxury.”

The L’Oréal-owned Kiehl’s Since 1851 brand has responded to its customers’ search for value by offering trial sizes of its most popular products, including Ultra Facial and Creme de Corps moisturizers, for the first time. The brand also has seen customers gravitate toward its larger sizes — some of its shampoos come in 16.9-oz. bottles, for instance, and Creme de Corps is available in a liter size.

“Sizing has never been more important,” said Chris Salgardo, president of Kiehl’s Since 1851. “We are trying to capture customers at both ends.”

Salgardo has been carefully watching the basket size, looking to see if Kiehl’s customers are still buying products across the brand. He acknowledged the basket size had gotten smaller during the past year, but since July, he has seen shoppers begin to toss a broader mix of items into it, as they start restocking their bathroom essentials and makeup bags. “In the beginning [of the recession], consumers were saying, ‘I’m going to use up every bottle that I have, and then I am going to replenish,’” he said.

“We’ve been watching the business closely and, as of July, things seemed to be improving,” said Salgardo, noting that the fall season was particularly challenging.

Kiehl’s always has passed free samples to its customers, but Salgardo said the brand is ramping up its sampling program to entice shoppers to try more products in the line, particularly those who may buy more expensive skin care brands elsewhere. At $42, Kiehl’s Abyssine Lotion offers an alternative to pricy antiaging lines, said Salgardo, adding that the brand is seeing an uptick in antiaging sales.

Kiehl’s also is working to knock down shopping hurdles by offering a “curb-side pickup service,” where customers call ahead to place an order and are hand-delivered their order at the store’s front entrance.

To dress its 33 stand-alone stores for holiday, Kiehl’s has partnered with graffiti artist Kaws. “We will have the right products and the right store environment. We will be armed and ready,” said Salgardo. “If the customer shows up, it will be a win.”