Beauty’s David and Goliath Square Off

The mass market beauty business is involved in a tug-of-war between major brands fighting to maintain and expand their real estate and upstart vendors yanking at buyers to give them a chance in the aisle.

By Molly Prior and Andrea Nagel on June 10, 2005
View Slideshow 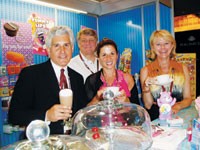 NEW ORLEANS — The mass market beauty business is involved in a tug-of-war between major brands fighting to maintain and expand their real estate and upstart vendors yanking at buyers to give them a chance in the aisle.

A confluence of factors is causing the tussle. First, low productivity per square foot has put major brands under the microscope. Smaller, nimble marketers with new concepts see an opportunity to bring innovation to sagging sales. To top it all off, consumers have little loyalty and merely search for the next big thing.

These trends were evident at the National Association of Chain Drug Stores’ Marketplace Meeting held here June 4-7. It was one of the busiest shows in years for the beauty category with 141 cosmetics and fragrances companies and 159 health and beauty suppliers exhibiting at the show, which in total hosted 4,200 attendees. In addition to stalwart players such as Revlon, L’Oreal, Coty and Procter & Gamble, there were a host of fledgling brands such as Pantina, Jesse’s Girl, Flavor Factory and NYX Los Angeles, all clamoring for retail buyers’ attention.

Retailers were taking note. “I really like looking for something different that not everyone has,” said Marti Bentley, director of beauty for Brooks Eckerd Pharmacy.

But to add new lines, retailers have to snip space away from existing brands. Those companies are busy coming up with their own product breakthroughs to maintain — and enlarge — their retail footage.

Revlon continued to introduce chains to two major initiatives, as reported. The first is an overhaul of Almay to make it easy to shop for busy women on the go, while also nudging Almay back into skin care. The other push is for Vital Radiance, a color line targeted at mature women. One buyer was skeptical whether women would want to identify themselves with a brand targeting older women, and added that dedicating additional space for a company that was down $100,000 with her chain over last year would be hard to justify.

L’Oreal also is busy working on a new color launch that buyers describe as being “MAC-like” in regard to high pigment color.

Del Laboratories has a wealth of innovations of its own, including a big push into lip under the Sally Hansen brand. Sally Hansen also continues to build its Airbrush franchise and is gearing up to introduced New & Improved Airbrush Legs, a waterproof formula. “Sally Hansen is no longer just a nail care company,” said Harvey Alstodt, president of global business of Del Labs. “It’s an entire cosmetics franchise.”

While retailers placed some of the big guys on watch, many buyers praised the success and innovation of Physicians Formula. The brand’s senior vice president, marketing, Ingrid Jackel-Marken, acknowledged, “Consumers are as loyal as fleas,” but added Physicians Formula keeps its assortment fresh with a host of products meant to solve everyday problems. Some 68 new items are slated for 2006, but the company is mum on details. Its success has spawned imitation. “We are no longer below the radar,” said Marken. Physicians Formula has nabbed more space along the beauty wall, increasing its display to 4 feet in drugstores last year and upping its presence in mass retailers to nearly 6 feet. Marken also reported Target will grant Physicians Formula 8 feet of space. The goal now, said Marken, is to generate the same sales performance in a bigger space. The line’s premium positioning will help it do just that, she added.

The showroom floor was teeming with companies trying to seize an opportunity to bring their brands to mass.

Lisa Yarnell, president and chief executive officer of Jane & Co., thinks her brand fills a hole in the market. Jane’s price points average $3 to $6, a range that is represented by less than 10 percent of products available in food, drug and mass stores. “And our segment provides the highest return-on-investment growth in the category,” said Yarnell.

Yarnell displayed a host of creative items including a Makeover in a Box for $5.99 and a dual-acting product called Gloss ‘N Line Lips, which has a gloss and a liner in one product.

Jane cosmetics is aggressively moving to regain lost space, and is currently conducting a test in three major accounts, reported Yarnell. The company also has created a new advertising campaign that spotlights product, over an overall brand image. Product benefits are listed in multicolored type.

Another company spicing up the choices at mass was Pantina, a new line created by contract manufacturer Interfashion Cosmetics that resembles upscale lines such as Tarte, Nars and Stila. “We won’t want to be a me-too in mass,” said Sonia Russomanno, vice president of marketing for Patina. She explained each product in the line is meant to be portable and multitasking. For instance, each gloss is also a lip plumper. Russomanno, a former Avon executive who worked on the launch of Mark, said women’s lack of brand loyalty plays well for Patina. “Women are very experimental. They are willing to try new products and are not guided by brand loyalty,” said Russomanno. “The big guys are losing share and retailers are willing to experiment,” she added.

Patina hopes to introduce the collection at retail through countertop displays by the fourth quarter, and will stir up buzz by handing out full-size samples and kicking off a model search. Products range in price from $4 to $7.

Rite Aid decided to experiment with CRL Marketing’s Jesse’s Girl with success, according to Judy Wray, category manager for Rite Aid. What sets the line apart from competition is unique packaging and fixturing including an eye shadow with eyelashes painted on the package. “Consumers have become interested in trendy products from Sephora, but find they can buy ours for $1.99 to $3.99,” said CRL’s president, Jesse Lawrence.

Sephora’s dedication to new items and trends is trickling down to the mass market, and retailers hope to duplicate Sephora’s success with upstart brands.

Dessert Beauty, which is fronted by Jessica Simpson, started in Sephora and now has an offshoot for mass called Dessert Treats. According to Alexandra Zanella, vice president of marketing and sales, Treats is selling strongly at Walgreens, Brooks Eckerd and Longs. “This line is a whole new category — it’s bath, fragrance and flavor,” said Zanella, adding that it’s “kissable” and “smoochable,” too. Dessert Treats is gearing up to launch new flavors for holiday.

Tasty temptations also were on the menu at Lotta Luv, which served up its newest licenses — Dr. Pepper, 7-Up and Orange Crush. For men, Lotta Luv is adding flavored lip glosses based on products such as MetRx. Additionally, Steph Fogelson, president of Lotta Luv, gave WWD a peak at patented new packaging. Locked Up is a magnetic lip gloss perfect for lockers. There is also Gloss ‘n Glow, a spinner gloss, and Double Luv, a combination of real candy on one end and lip gloss on the other.

At Flavor Factory, a new company, the emphasis is on junk food such as Lip Munchies featuring items inspired by foods such as pizza, French fries and pancakes.

For those who want great taste without the whimsical packages of licenses, Prestige Cosmetics offered lip glosses and body shimmers in flavors such as marble cake and lemon meringue.

Another up-and-comer is Arissa from Beauty 21. The packages sport soft-touch packaging similar to that found on Nars, but priced at $3.99 to $6.99. Walgreens is among the companies said to be testing the line.

NYX cosmetics, also housed in black packaging, is gearing up to launch a national sales program. NYX is looking to entice retailers with a stand-alone silver display table and some 1,200 stockkeeping units. The majority of the items range from $2.99 to $4.99, with foundations selling for $9.99. NYX has began to roll out its display tables to approximately 20 to 30 Longs Drug Stores.

Now that Markwins has revamped Wet ‘n’ Wild and Tropez, it is putting efforts behind its newest acquisition, Soho Cosmetics. Markwins is currently in the midst of overhauling the line, which launched in Canada nearly two years ago. Annie Hubert, president of Soho Cosmetics, promises the revamped line will be totally different in packaging, colors and formulations than anything on the market. Prices will range from $2.99 to $9.99, and will bow in January on the cosmetics wall, said Hubert. Soho Cosmetics is currently rolling out its fashion-forward cosmetics bags to mass chains.