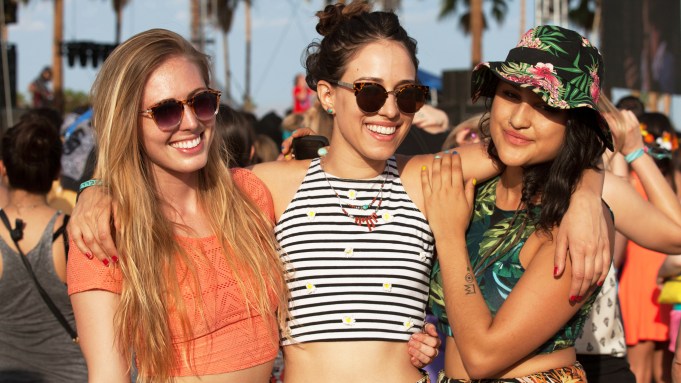 What goes with short shorts? A spray tan, of course.

The scorching heat and young bodies at the Coachella Valley Music and Arts Annual Festival have spawned a skimpy Boho style that’s become big business for fashion brands, and beauty services and products purveyors have piggybacked on the barely there looks to benefit greatly, too. Up and down California, salons and spas of all types are filling with Coachella-bound women getting bronzed, buffed and waxed to be Instagram-ready for their desert excursions.

“April is probably the busiest time of year because of Coachella, and immediately after that is Stagecoach [country music festival],” said Christina Lewis, owner of three-unit tanning concept Organic Shimmer. “We are pretty booked from open to close during the weekdays, and we see a huge increase in sales and foot traffic.” Lewis elaborated that, coupled with the services, purchases of Organic Shimmer’s tan extender products rise during the music festival period as tanning customers try to make sure their tans don’t disappear until they return home.

Celebrity spray-tanner Katrina Brown’s schedule is packed from Tuesday to Friday with appointments. She’s detected an interest in dark brown tans heading into Coachella this year. “No one is looking for a subtle glow at Coachella,” said Brown, owner of The Bronzing Boutique. “What goes with the really, cool ethereal hippie fashion is a really deep bronze. It is more of a party tan than anything done for red carpet or black tie.”

Hair removal is also a key element of Coachella prep. Cutoff shorts, tank tops, crop tops, swimsuits and flowy dresses, and flowy body hair aren’t a desired combo. “People are definitely getting groomed. There is no way they are going to go to the festival, then lay out at the pool, wear a bikini and show a lot of pubic hair,” said Paz Stark, owner of Stark Waxing Studio, which has locations in New York and Los Angeles. She added, “Especially in the transition out of winter, this might be their first full leg [wax] of the season.”

In the lives of festival-goers, Coachella is an important moment to see and be seen, and enter the social media spotlight. It’s no surprise, then, that they pay attention their appearances. “The young people are looking at this as a potential hook-up event. It is like a date, and you want to look your best for a date,” said Stark. “There is lot of excitement when people come in this month, and there is a feeling of adventure.”

Brown’s clientele changes as Coachella approaches with Millennial customers flocking to get spray tans. “I have a huge influx of twentysomethings all the way to clients in their early 30s. Normally, my market would be 30 percent that clientele, and the rest of it is Hollywood Hills, Beverly Hills or Malibu housewives or career women,” she said. “They have found me on Google or Instagram, and they have found me from the celebrities I do. They are local to L.A., but they come from out of town as well.”

Although Millennials certainly constitute the core clientele for Coachella-spurred services, Stark pointed out the audience for Coachella and related beauty maintenance is broader than people might imagine. “There are plenty of 40-year-olds. I have two kids, and I went to Coachella the first few years,” said Stark. “We get the teenagers whose parents are taking them, and a lot of men who are taking their shirts off and don’t want to have hair on their chests. Coachella is such a huge brand now.”

How huge is Coachella? Tickets to the festival, which takes place April 15-17 and April 22-24, sold out in less than an hour, and some 500,000 people are expected to visit the Coachella Valley region for it. According to Billboard, Coachella is the highest-grossing music festival in the world. In 2015, its windfall was $84.3 million, more than three times what Outside Lands in San Francisco, the second highest-grossing festival, generated. The Coachella Valley Economic Partnership, and Greater Palm Springs Convention and Visitors Bureau estimate the economic impact of the colossal concert event at in excess of $704 million.

Large beauty brands are clamoring to take part. Kylie Cosmetics is unveiling three metallic matte lipsticks timed with Coachella; false lashes brand Ardell has started a social media contest with a music festival tie-in using the hashtag #EyeHeartFestivalsContest; and NYX Cosmetics is partnering with Nylon on the magazine’s Coachella kickoff party. And scores of other cosmetics companies and retailers are creating content and curating products to take advantage of Coachella beauty trends.

For beauty service providers, though, occasions like Coachella are especially crucial to building clientele. Mike Concannon, vice president of marketing for Sunless Inc., owner of Mystic Tan and Versa Spa, noted events commonly serve as introductions to spray tanning. In the case of Coachella, women frequently visit tanning salons together before attending, multiplying its effect on future business — and salons often encourage the behavior by offering deals for friends and family.

“One of the truisms of this business is that events spark usage,” said Concannon. “When the social stakes are the highest, spray tanning follows.”