Beauty Brands’ high-end “the studio” concept will be in 27 doors by the end of this year. 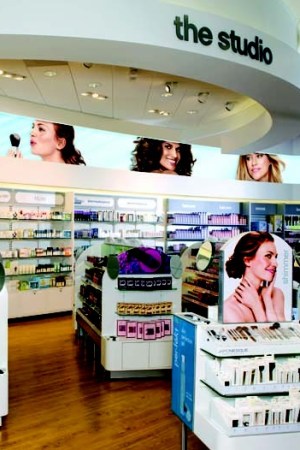 STUDIO ROLL OUT: Beauty Brands’ high-end “the studio” concept will be in 31 doors by the end of this year and rolled out to the beauty specialty retailer’s remaining 23 doors by next summer.

The high-end “the studio” concept kicked off in 2009 when the Kansas City, Mo.-based chain dedicated 25 percent of the retail floor at four stores in its hometown to prestige skin care and cosmetics. Since that time, “the studio” has spread to all of Beauty Brands’ Kansas City area and Colorado locations, and to single locations in Omaha, Neb. and Normal, Ill. Stores in the Dallas-Fort Worth region will be the next to get revamped in “the studio” mold. The top skin care brands in “the studio” selection are Philosophy, Dermalogica and Murad, and the top cosmetics brands are Smashbox, Too Faced and Tarte.

A DEATHLY BEAUTY: London-based makeup label Illamasqua is known for taking a Gothic approach to beauty, billing its products as “night time makeup for your alter ego.” But now, the company has taken the step of offering its services to the recently deceased. The company has collaborated with London funeral directors Leverton & Sons, to offer clients a professional makeup application as part of a pre-arranged funeral plan. “To wear the most fabulous make-up applied by a professionally trained make-up artist for your final journey is the ultimate statement of celebration,” the company said in a statement. A spokeswoman for the label said that two of Illamasqua’s make-up artists had been specifically trained to apply makeup to the deceased by an embalmer. The service, which costs about $720, is offered for Leverton & Sons’ London-based funerals from this month.

BRUCE OLDFIELD UNVEILS FRAGRANCE: After building his design reputation crafting custom-made dresses and bridal gowns for a host of celebrities and socials, Bruce Oldfield is turning his hand to fragrance. The British designer, who’s dressed fashion figures from Princess Diana and Charlotte Rampling to Jemima Khan, Sienna Miller and Rihanna during his 35 years in business, will launch his first fragrance in late July.
The fragrance, called Bruce Oldfield, combines notes of mimosa, bergamot, vanilla, ylang ylang and neroli. Oldfield developed and produced the fragrance in consultation with the British perfume house, Floris.

The designer said he wanted the scent to evoke summer in the South of France, drawing on the time he spent in Cap d’Antibes with Rampling, his muse, and a band of bohemian types in the early Seventies. “My memories of Cap d’Antibes in the early Seventies conjure up this glamorous, intelligent, playful woman I love to design for,” said Oldfield. The fragrance, which comes in an angular, opaque black glass bottle, is a limited edition eau de parfum and retails at about $143 for 100 ml. It will launch July 25 at Oldfield’s two Beauchamp Place stores in London’s Knightsbridge and at Liberty in London. The latter was the first retailer to carry Oldfield’s collection when he graduated from London’s Central Saint Martins in 1973.

HAIR APP: Naturally Curly has launched a new mobile app called Curls on the Go, a free global application for the iPhone and iTouch that features a Frizz Forecast, product and salon finders with reviews, a hair type finder and hair styles ideas, as well as photos and videos. Curls on the Go will also offer deals for salons and products with more than 5,000 curly hair community vetted products with thousands of reviews. Users will also be able to research ingredient information and buy featured products straight from their mobile phones. Already the app has 27,000 downloads and ceo Michelle Breyer expects to be at 30,00 by today.

P&G DOCUMENTARY: Last night CNBC aired a one hour documentary on Procter & Gamble, titled CNBC Titans, exploring the consumer product giant’s 173-year history. The segment covered topics such as the company’s start with the Ivory soap brand, followed by Crisco, and how it grew to appeal to homemakers by conducting door to door surveys of how women used their products in the home. The documentary also talked about P&G’s trailblazing marketing campaigns, especially behind its Tide and Charmin brands, as well as its acquisition of Richardson Vicks, which brought the company the Pantene and Oil of Olay brands, both of which now generate billions of dollars in sales. P&G’s current chairman of the board and chief executive officer, Robert McDonald, as well as Jon Moeller, chief financial officer, and Marc Pritchard, global brand building officer appeared in the documentary, as well as perspectives from former ceo’s AG Lafley and John Pepper.

CND CEO STEPS DOWN: John Heffner has stepped down as president and chief executive officer of CND after 14 years at the helm. Heffner cited spending more time with family and “exploring new dreams” as reasons for his departure, which is effective today. He will, however, serve as a consultant for the nail company for one year. CND’s management team will now report directly to Sennen Pamich, president of Colomer USA, CND’s parent. Founder Jan Arnold will remain as the CND local leader and head of the management team. Among his numerous contributions, Heffner is most proud of building a solid team and playing an important part in launching one of the nail industry’s greatest innovations, CND Shellac. He has also served as chairman of the PBA Board and has been given The City of Hope Spirit of Life Award.