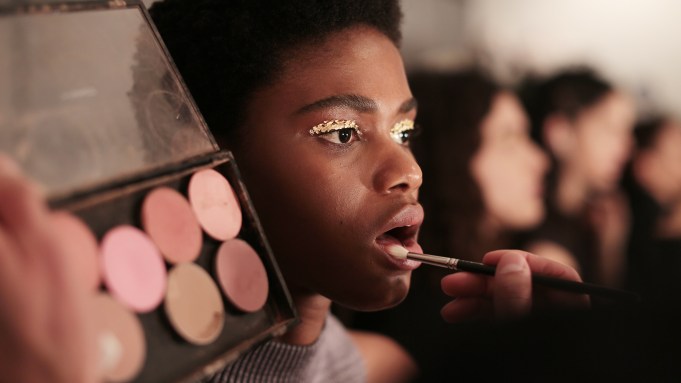 Bold beauty looks — including statement eye makeup and bright lips — are popping up on the fall 2018 runways at New York Fashion Week.

Midway through NYFW, some designers are leaving no-makeup makeup behind in favor of color cosmetics that make a statement. A range of bold eye looks popped onto runways, ranging from smokey eyes at Tom Ford to neon graphic designs at Jeremy Scott to gold foil at Ulla Johnson. As far as hair looks on fall 2018 runways, natural textures continue to take center stage — as seen at Chromat, Sandy Liang and Tom Ford. Nails are also coming back into focus, with graphic motifs displayed at Chromat with a bright checkered nail, Tom Ford with a subtle focus on the half moon, and a custom blue green at Sandy Liang.

At Tom Ford, makeup artist Pat McGrath created a smokey eye using Tom Ford Beauty products, with black and gray shadow and a touch of glitter, for dimension, on the lid. Models at Philipp Plein, Carmen Marc Valvo and Greta Constantine also sent versions of a smokey eye down the runway. Katie Holmes also sported bold, black liner in the campaign for Zac Posen, as did models at Red Valentino.

Colorful, graphic eye looks were also popular for the fall 2018 season in New York. Makeup artist Kabuki, in a nod to Jeremy Scott’s new collaboration with MAC, created a three-dimensional look that tied in with graphic elements in Scott’s designs. “I wanted to put across a feeling of Eighties futuristic pop in a way that was pretty and fresh,” Kabuki said. The look included  3-D eyeliner created with plastic, with the corresponding eye shadow blended in the inner corner of the eyes. At Chromat, color was also the focus of the eye look. Fatima Thomas for MAC created a winged, blue eyeliner reminiscent of the water pictured in the fall 2018 show’s invitation. At Adam Selman, Dick Page for MAC crafted an eye with bright shadows, going for a “New Wave-y” look. At Ulla Johnson, Romy Soleimani for MAC created a gold leaf-lid in an “organic play to disco.”

This season’s colorful makeup looks were a departure from the makeup-light look that remains popular on runways — but in hair, the natural look is still reigning supreme. At Tom Ford, Orlando Pita left models’ texture alone, messily pinning the girls’ hair into place. Natural textures were also left mostly alone at Sandy Liang, where Amika’s global artistic director Naeemah LaFond worked to enhance each model’s natural hair. At Chromat, Kien Hoang for Oribe enhanced the natural texture of many models, while pulling the hair of others into high ponytails.

While not all shows place a huge focus on the nails, graphic nails and bright colors have made their way into New York Fashion Week. At Chromat, models sported bright, false nails with a checkered pattern created by Lady Fancy Nails, real name Eda Levenson. For Tom Ford, Mei Kawajiri created a nude nail with an extra coat on the half moon to emphasize it for a subtle, graphic look. Nails at Sandy Liang were inspired by Hallie Parker, the character Lindsay Lohan played in the 1998 remake of “The Parent Trap.” They were created by Holly Falcone for Orly with a mix of Royal Navy and I See Blue.