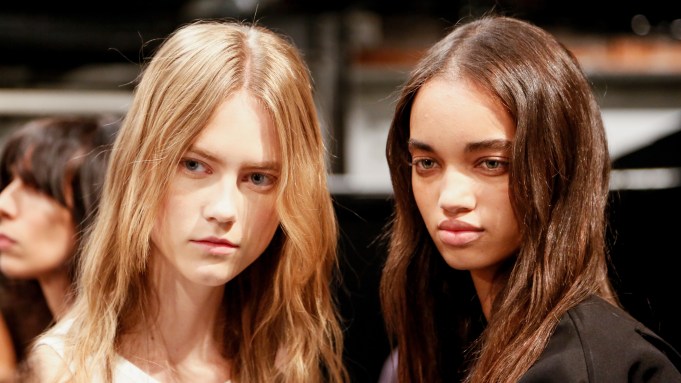 “Cleaned up,” is how John Demsey, executive group president of The Estée Lauder Cos. Inc., described to WWD the season’s runway beauty looks. “Great skin, looking pretty. Being beautiful is in style again.”

Nails were another category that affected a cleaned-up style. Though there were extreme ends of the spectrum — Victoria Beckham opted for a buffed and shaped yet unpolished nail, and Gypsy Sport models wore acrylics embellished with various designs, gone for the most part was the intricate nail art. Instead, there were simplistic, color-blocked and striped styles, or in the case of Thom Browne, a different neon-tinged pastel Essie shade per nail. At Proenza Schouler, nail artist Honey for China Glaze created a simple design of tribal-inspired swipes of black polish on a bare-nailed base. At Jason Wu and Michael Kors, Deborah Lippmann and Jin-Soon Choi created riffs on the French manicure. At Creatures of Comfort, there was a French manicure done with brightly colored tips instead of white, and in the middle of the nail, there was an outline of a gold triangle. Choi attributed the return to simpler styles to the fluorescent neon shades on the runway, but is also reflective of the fact that consumers paying attention to the runways are looking for styles they can try at home. “People don’t want to be too garish,” Choi said. “They want to have a clean feeling, and easy to do nail art — that can go with your fashion style really well.”

Ornate and elaborate adornments for hair popped up at the Paris Couture shows in February, but this season in New York, headbands, clips and barrettes affected a craftier, homemade feel — and in some cases, literally were.

At Baja East, wide strips of bandana cloth that had been aged and dyed by designers Scott Studenberg and John Targon were fastened horizontally as headbands on each model. The resulting effect from the designer DIY project was an individual tie-dye look for each headband that gave the appearance of an arts and crafts project at summer camp. At Rodarte, Odile Gilbert for Wella Professionals secured headbands and barrettes adorned with leftover pieces of the Mulleavy sisters’ collection — white, black and red bits of lace, sequins, leather and chiffon — that had been constructed into whimsical handmade flowers.

Hairstylist Guido Palau for Redken attributed the homespun effect to the turn toward individuality the New York shows have taken over the last several seasons. Homemade hair accessories with lackadaisical flourishes are in tandem with the rise in preference of natural hair texture and the “no makeup makeup” look that aim to embrace uniqueness and individual features, even imperfections. “When something is put in the hair and bound — maybe you feel they belong to the person,” Palau said.

For all the talk of individuality, many designers still stuck with a safe bet—the red lip, though this season saw some more dimensional iterations of the look. At Michael Kors, Dick Page for MAC Cosmetics modernized a classic Old Hollywood bold red lip by using two different grapefruit-hued shades. At Cushnie et Ochs, an ombré version of the red lip appeared — a deeper red shade on the top tip, a fluorescent, almost hot pink color on the bottom. At Jason Wu, Yadim created a neon red-orange lip. At Creatures of Comfort, Simone Otis for Shiseido mixed three red shades of the brand’s new Rouge Rouge lipstick to create an original fruit-punch-like, fluorescent hue, then carefully took off and reapplied it a few times over for a more casual look. Otis attributed the uptick in red lip innovation to an uncertain political and cultural climate. “Everyone’s kind of peeking out, wondering what’s going to happen, without stepping out too far,” she told WWD.

While red was big for lips, dark eyeliner was the prevailing theme for eyes. This season’s dark eye took on a smudged, grunge-like effect that many artists described as “lived-in,” or as if the models had done their makeup themselves. At Eckhaus Latta, Coach, Thakoon and Rebecca Minkoff, the look was more grunge, where sharp lines at Prabal Gurung and Phillip Lim steered strong and edgy.

For eyes, as well and cheeks and lips, glitter appeared multiple times on the runway over the course of the week. Aside from Pat McGrath’s vampy glitter lip at DKNY, there were silver glitter lips at Rosie Assoulin, cheekbones highlighted in gold glitter at Brandon Maxwell, and at Altuzarra, a light dusting of glitter MAC pigment applied to the all over the face for a look meant to look like sunlight reflecting the face. “There’s a Pat McGrath influence obviously—it’s a trend,” said Demsey. “We’re in a world where more is more, less is more and the same is not. Every trend is living at the same time right now.”