Beautyblender is venturing into new territory.

“When you look at velvet straight on, it’s matte — you don’t see any shine — but as soon as you start turning that velvet into the light, you can see highlights and movement,” Silva said. “There [is] enough powder in the product to conceal, but enough luster in it to make it look very natural.” 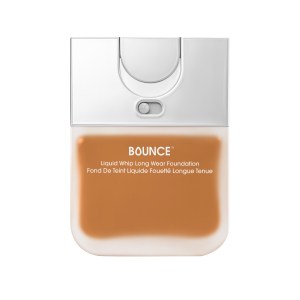 Silva came up with the concept on set for a shoot about 10 years ago, but prioritized the sponge side of the Beautyblender business since the tool took off.

Silva, who is Latina, is launching Bounce in 32 shades, aiming to reach all skin tones and undertones. The product is housed in packaging that is meant to be blender- (and makeup artist-) compatible — one side of the bottle has a plastic palette where product is dispensed before application, and customers can use their blenders (or fingers, or makeup brushes) to pick up the product and apply from there. The goal was for people “to stop using the back of their hands and making their hands dirty with their makeup,” Silva said.

“You have more control when you put it in that dish; you can bounce it away without overapplying,” she noted. “I wanted to bring this concept of play and ease of experiment to the consumer so it made sense for me to turn the bottle sideways and make it a palette.”

In response to pushback on social media about the company’s shade range Wednesday, the company said the assortment includes seven “deep” shades and seven “tan/deep” shades, and was created by and for multicultural women (Silva and brand ambassador Erica Dickerson worked on the line).

“Half the shades are formulated for a range of brown skin tones and offer a wide variety of undertones from neutral, warm, cool and olive, and a special ultramarine blue to create a deep, rich tone,” the company said. “Some tones may look warmer in photos, but in real life, they’re meant to work with skin that has warm undertones.”

Bounce is set to kick off Beautyblender’s dive into makeup territory.

A full line of complexion products is in the works, slated to come out over the next two years, Silva said. “We have planned for a full-fledged line from complexion to eyes, lip, cheek — all of that,” she said, declining to provide further details except to say the next makeup product will debut in 2019.

Bounce will be available at Sephora online July 24, and in stores Aug. 10. It is exclusive to Sephora U.S. for a year, but the product, which includes hyaluronic acid and white birch extract in the formulation to try to even skin tone and texture, will also roll out in Sephora Canada, Cult Beauty and Sephora Middle East in the coming months.

Industry sources estimated that Bounce could bring in between $15 million and $25 million during its initial launch phase. Beautyblender, before the Bounce launch, was expected to do $150 million in retail sales for 2018.

Beautyblender, which has drummed up organic influencer support from its early days, is supporting the Bounce launch with help from that community. Ten influencers and 15 micro-influencers have already received the product, and starting July 20, will be posting their reviews and content around Bounce.

Then on July 25 and 26, Beautyblender is hosting its first-ever pop-up in New York City.