There were 15,000 people, 90 brands, 230 influencers and a handful of celebrities squeezing into 200,000 square feet at the Los Angeles Convention Center on Saturday. 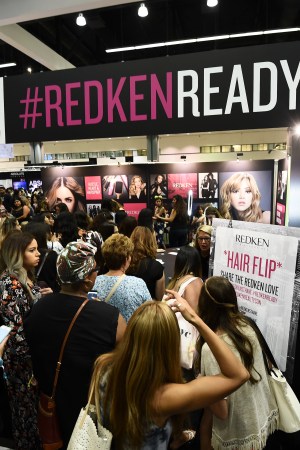 Nothing conveys the sway of social media more powerfully than long lines.

The medium has become so ubiquitous  that it has catapulted ordinary people and common place brands into super stars on the world’s most dominant stage.

This was evident at Beautycon on Saturday at the Los Angeles Convention Center. It was impossible to escape teenagers and twentysomethings — and the occasional mystified parent — queuing to get inside the venue, scour the latest from cosmetics brands once they were inside and make contact with their favorite content creators. The wait to greet digital beauty influencer Kandee Johnson pushed 90 minutes, and the line kept growing as the seconds ticked by.

“This is where it all goes down. There are literally thousands and thousands of beauty customers and people in general that want to learn,” said Mally Roncal, founder of Mally Beauty, setting the scene from her brand’s station at the QVC booth. “I love teaching, educating and inspiring and, obviously, making products that can help them achieve what they want to achieve — and they are all right here.”

Specifically, there were 15,000 people, 90 brands, 230 influencers and a handful of celebrities, notably Tyra Banks, Kelly Rowland, Christina Milian and Ashley Tisdale, crowding 200,000 square feet. Attendance at Beautycon, a sort of conference, community meet-up and entertainment show wrapped into one, has doubled in three years, and it’s part of a constellation of events — Generation Beauty and IMATS are two others — that’s expanded greatly as social media and beauty information on the various platforms has exploded.

Among the Beautycon attendees was Yasmin Khalil, a recent college graduate and sophomore visitor to Beautycon, who was happy to brave the lines for a chance to interact with brands and social media personalities. She had Maybelline, Lime Crime, NYX and Tarte on her wish list of brands to check out. “This year is much better than last year. Last year, we were outside waiting in the line for two hours. It was hot, and we were cramped, but it’s so much fun and everybody is so nice,” Khalil said. “This year, it’s much more organized and functional. It’s moving well.”

A makeup hobbyist displaying her beauty creations on Instagram under @makemeupyaz, Khalil asserted that participation in Beautycon is critical for brands to stay in touch with Millennial preferences. “Sometimes when you are in corporations, you are trying to make money and a profit, you don’t really realize what’s going on with girls our age. It’s important to see how we act, how we are, what’s important to us and to learn how best to cater to us with products,” Khalil said.

Brands are increasingly open to having two-way conversations with consumers as well as digital influencers. Julep was inviting attendees to vote on its next lip color, an initiative that’s emblematic of the brand’s approach to soliciting consumer opinions. “When we do collaborations with women whether it is on art, packaging or actually involving them in making decisions about product development, we try to deeply understand what they care about and reflect that in what we do,” said Jane Park, chief executive officer and founder of Julep. “The companies that will succeed will break down walls that don’t need to exist.”

Angel Merino, a social media personality with the Twitter handle @mac_daddyy_, advised brands not simply to consider sales figures when reaching out to digital influencers. “It’s about building a genuine, sincere relationship where a brand isn’t just seeing you as a number, but they are really trying to develop a relationship and are helping you achieve your goals,” he said. “When brands develop that relationship, everything flows so genuinely and the influencer is more receptive to any ideas the brand has for campaigns or online social media promotion.”

Although there’s been a flood of collaborations between social media beauty gurus and brands, neither brands nor gurus believe they are ebbing. The social media personality MakeupShayla, whose palette with Tarte has been a hit, suggested brand-influencer partnerships are still in their early stages. “Brands are starting to realize the power of influencers. Even a year ago, I feel a lot of brands were like, ‘Let’s find celebrities. Let’s find celebrities.’ So many people relate to influencers that the brands are now [saying] ‘Oh, that is what we need to be doing.’ For the most part, brands are starting to get it,” she said. “On the back end, they don’t understand a lot of things about social media, and we are here to teach them.”

Enthusiasm for collaborations at Beautycon demonstrates why they’re multiplying. Beautycon attendees, eighth-graders and friends Adanna Ogu and Nikki Olaleye were clearly excited about the YouTubers they follow connecting with beauty brands to release products. “You already like the makeup, but when your favorite people are helping out with the makeup, it’s a double whammy,” Olaleye said. Ogu chimed in, “It’s almost like receiving a little piece of them in your hands. It’s kind of sacred.”

Social media sensations aren’t only leveraging their audiences with product collaborations, they’re turning them into customers for their own brands. “With the way that social media is growing and what a big platform it is and how it has catapulted so many careers, I definitely see a lot more people taking that leap and developing their own products,” said Merino, who launched the brand Artist Couture in 2014. “Many newer brands are popping and thriving because of social, and I think that’s the direction that the beauty industry is taking.”

Not all social media-sparked brands will prosper, as social media influencer Kristen Leanne, founder of hair color brand Arctic Fox, knows too well. “It takes a lot of perseverance. You have to try, try and try again. I’ve had many brands that failed and, when you have a failure, you have to take the learnings from that and put it into your next brand. One out of 10 isn’t going to be successful. You have to stay ambitious,” she said. “I had a boutique before, and a lot of people were doing boutiques. There are not as many hair color brands as there are makeup and clothing brands, so it was easier that way, and it’s something I’m truly passionate about. I’ve been coloring my hair for so long.”

Ambition certainly doesn’t seem to be an issue for social media stars. Merino has big plans for Artist Couture, which sells three products: Diamond Glow Powder, Luxurious Cheek Colour and Kissable Lip Laque. He detailed, “My goal for the brand is to have a full product line that can deliver your start-to-finish makeup routine and to start to retail at a department store.” MakeupShayla aspires to be a spokeswoman for a major makeup brand. She said, “I would love to walk into a store and see my picture everywhere kind of like how Zendaya is the face of Cover Girl. Something like that would be awesome.”

Excusing social media sensations, their brands and the beauty trends they propel as short-lived would be foolhardy. Ellen Lennon, director of merchandising for QVC, explained trends fueled by social media have had lasting impacts. “Contouring now has been a trend for a few years as has highlighting. They’ve always been strong for us. It’s just that now they are being brought to the forefront. To us, it’s not an in-and-out flash in the pan. It’s really long term,” she said.

Partially powered by social media, color cosmetics remains a stellar category for QVC and the beauty industry generally. Lennon said, “Lip has been really strong for us and also highlighting. Our customer loves highlighting. We also have a huge complexion business and that continues to grow. We are really excited to see lip jump as much as it has from last year.”

It’s left to brands to figure out exactly how to incorporate the social media-driven makeup concepts in manners that are relevant to them. “When I saw that baking was going to be a big thing, I thought most people my age — I’m 44 now — don’t necessarily have time to bake. I created a concealer that is pre-baked. It does everything for you that you get when you bake your concealer. It brightens and sets, and it does it in one tube,” said Roncal, referring to a term for layering powder over foundation and concealer for a creaseless face. “I have been putting a lot of these trends into my products, so that the customer doesn’t have to actually do the trend, the product does the trend for them.”