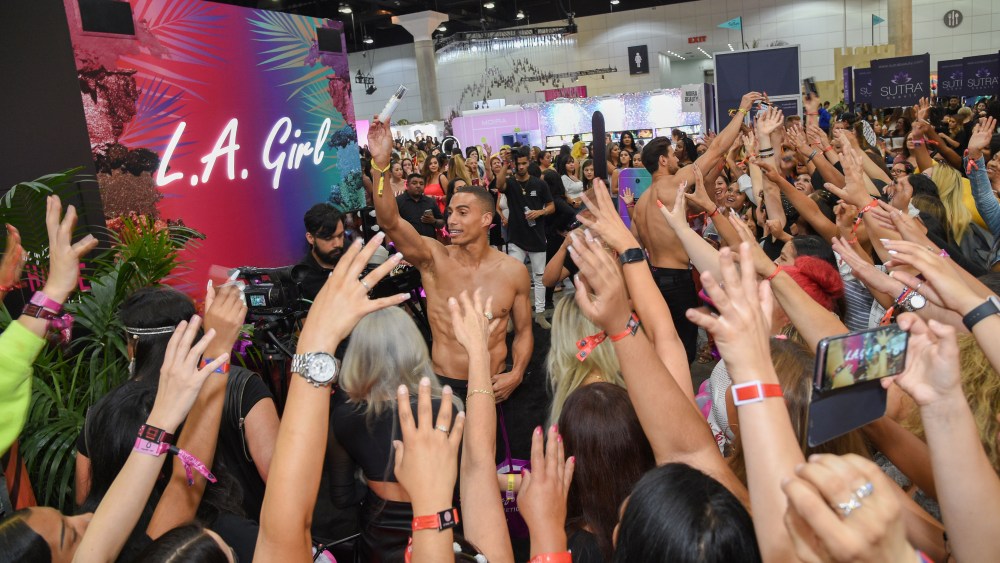 “Huda! Huda! Huda!” chanted fans in hysteria, reaching out for Huda Kattan. IPhones in hand, the crowd of largely teenage girls stood behind a barricade as the beauty guru came to the end of Beautycon L.A.’s pink carpet on Sunday.

Kattan, who is based in Dubai and arrived with sister Mona, was undoubtedly one of the biggest draws of the beauty festival, held downtown at the Los Angeles Convention Center over the weekend.

“We’re on the other side of the universe, and I feel like a lot of times we don’t get to talk and interact with people,” said the Huda Beauty founder, who left a career in finance to become a makeup artist and is now listed —  ahead of Rihanna no less — on Forbes’ list of richest self-made women. She is reportedly worth $610 million. “We want to connect with our community more.”

In 2010, she started a blog that quickly gained popularity, and three years later, she launched her brand, consisting solely of false eyelashes at the time. Now, providing a large range of products, from eye shadow to lipstick, the company — which has 38.5 million Instagram followers — is valued at $1.2 billion after TSG Consumer Partners acquired a stake in the company in 2017.

“I’m overwhelmed with the energy here,” shared Kattan, who stars in Facebook Watch’s reality series “Huda Boss.” It was her first time at Beautycon. “We heard that yesterday the fire marshals had to shut down our booth three times because there was such a crazy crowd.”

Founded in 2011 by Marina Curry and Jonathan Burford, Beautycon began as a conference for YouTubers and influencers. In 2014, Moj Mahdara, an entrepreneur working in digital entertainment, bought a majority of the company and has transformed it into the consumer-driven production it is today.

“The experiential has become community, and community has become the new retail,” said Mahdara, alongside Beautycon’s chief business officer, Kendra Bracken-Ferguson. “The fantasy of transformational, transactional entertainment, commerce and content, I think for years we all thought that was going to happen online. We spent all this time on this app or that app or this shopping cart or this code, all these things that we tried to do to make entertainment online commerce, and then I think I realized two, three years ago, I was like, ‘Oh s–t’ — it was a couple of years into Beautycon — ‘commerce is not going to get reinvented online.'”

“Commerce is going to get reinvented where it originally got reinvented, which is [in real life], in retail,” she continued. “That’s when we started to move this into a large retail pop-up, launching new brands, segments, limited-edition drops and thinking about it through the lens of the consumer, community, technology, entertainment and brand.”

The sprawling, 720,000-square-foot space was filled with booths featuring more than 300 brands, from long-standing Maybelline, a subsidiary of L’Oréal, to newer favorites like Glossier. Attended by more than 30,000 people, the two-day event was a loud, highly stimulating, mega-shopping experience full of Instagram-worthy installations. It was also an opportunity for beauty brands to interact directly with customers, while marketing and showcasing their latest products.

“For us, it’s really about exposing our brand to a new consumer and staying relevant in the beauty space,” said Sally Beauty’s senior manager of social media and p.r., Auburn Berry. The retailer, which was showing at Beautycon for the third year, had one of the longest lines of the day. “Sally is in the middle of a re-brand, and we want to show that we are back.”

L.A.-based Tatiana Sako, 15, stood in the seemingly endless line waiting for her turn inside the booth, where guests used tablets to virtually experiment with a hair color of their choice. After snapping a photo of themselves, they were e-mailed results and gifted products based on their specific needs.

“It’s been hard,” she said of the long queues. It was her third time attending the festival. This year, she came with her cousins, and they were each taking turns waiting while the others roamed around.

“I always come both days, so it’s kind of a tradition at this point,” she said of her return to Beautycon. “I’m definitely coming back…I got the general admission, but I may save up and get the VIP and not have to deal with these lines, but I’m still deciding.”

Defining the brand, Mahdara shared: “We’ve gone through an ugly period, an awkward teenager period. Like, ‘I’m maybe a media company, maybe a subscription box’…I think what started us is what defines us now.”

Today, she describes Beautycon as “an experiential brand that is really focused on beauty and well-being. We think about the brand through the pillars of inclusivity, innovation, having difficult, challenging conversations, financial literacy, self-empowerment and authorship.”

That message is reflected in panels occurring throughout the days and featuring self-made beauty heads like Anastasia Beverly Hills’ Anastasia Soare, as well as known faces in entertainment such as Priyanka Chopra, Megan Thee Stallion, Kehlani, Kelly Rowland, French Montana and Ciara, who shared their varying backgrounds, experiences in their respective industries and advice for those in the audience, largely women and young girls — particularly those of Generation Z, born in the mid-Nineties and early Aughts.

“This is a room of many different people from different ethnic backgrounds that have had different walks of life,” said Ciara, who shared that she is working on her own beauty line. “People want authenticity. They want a tangible experience.”

At first, these panels were YouTuber meet-ups, shared Mahdara. However, “to be super candid, that changed the year of the election,” she said. “When you look at the cultural shift that happened globally around the U.S. election in 2016, it became very clear that representation was going to become incredibly important to a consumer going forward, especially in an industry as visible as beauty.”

The weekend also featured meet-and-greets and a slew of influencers, including Liza Koshy.

“I went to Beautycon in 2015 in Dallas, but it was a very different experience,” said Koshy, who was announced as brand ambassador for C’est Moi. “It was very small. There were, like, three pop-up tents and maybe three lipsticks that they gave away, and that was it. But, hello, it’s grown and gone wild, and I’m proud of the beauty community. Hopefully, they let me in, just slide in. I’ll just be like, ‘Hey guys, me too.’ I’ll just edit myself into all the pictures with Bretman Rock.”

“I’m able to see the faces behind all my comments and DMs every day,” said Rock, who plans to appear at New York Fashion Week for the first time and attend the Jeremy Scott and Christian Siriano fashion shows. “I love interacting with my fans.”

Beautycon is proof that the leaders of the beauty industry are the influencers, said Dr. Loretta Ciraldo, a Miami-based dermatologist who’s been practicing for 40 years and formulating products for 26 years. Her skin-care line, Dr. Loretta, was featured in Pop, a space inside Beautycon personally curated by Mahdara. “It’s a new way of communicating that people who have many more years of experience have got to learn how to communicate.”

Other products inside Pop included indie brands like Beauty Bakerie and Y Cosmetics, whose eye shadow palettes featured questions written on the compact mirrors, like, “Why are women paid less than men?” The goal is to “start important conversations that need to be happening daily among everyone with a makeup bag,” notes the brand.

In 2020, the beauty business is prospected to be worth $675 million “and the majority of that is going to be indie brands,” shared Bracken-Ferguson. Ulta Beauty, also in attendance, dedicated its space to four up-and-coming labels including UOMA Beauty, an inclusive brand for “all who’ve been left out.”

Another focus for Beautycon is dissecting data gathered from their events, including wristband tracking and analyzing product purchases to help brands determine, among a number of things, which influencers to align with.

“This consumer was like, ‘Oh, I don’t know how I feel about this being tracked thing, and I said, ‘Do you want MAC to be here?” said Mahdara. “Do you want these brands to be here? What they need is data.’”

Their focus is on Asia. In June, Beautycon was in Tokyo, and next, the conference plans to expand into another major city in the continent.

“Tokyo is set for 2020,” said Mahdara. They’ll be including another Asian city, too. “Asia is a tremendously important opportunity.”

In L.A., they’ll be expanding to a three-day event next year.

“We know it’s a weekend now, because 27 percent of our audience is traveling from out of state,” she continued, adding that they plan to host pop-up experiences throughout the U.S. The festival has also been showcased in New York City.

“It’s, ‘Next year, I want to see this brand and that brand and this celebrity and to get this information and that food,’” she continued. “To have such a deeply engaged consumer is really powerful.”