Beautycounter, an early clean beauty proponent, has secured a $1 billion valuation via a majority investment from the Carlyle Group. 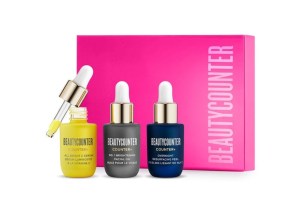 Beautycounter was one of the first beauty companies to come out with a “Never List” of ingredients that it would not include in products because they were either questionable or potentially harmful. That list is now 1,800 ingredients long.

Beyond Beautycounter’s own ingredient list, Renfrew has been a key part of pushing the clean beauty movement forward in the U.S., and has advocated for legislation related to personal care product safety in the U.S.

“We are trying to transform an antiquated industry,” she said.

The brand is planning to use the capital to raise awareness and scale, Renfrew told WWD in a Zoom interview on Tuesday.

“We’re going to enhance our digital capabilities to broaden our reach,” Renfrew said. “Those that know us they love us, they love us for the performance of our product and the authenticity of our mission. We know that we can reach many more people both within North America and beyond its borders.”

“It felt like the right partnership at the right moment in time,” Renfrew said, noting that Beautycounter had “enjoyed significant growth” that the Carlyle partnership will help to accelerate. Beauty Inc’s annual Top 100 research estimates that for 2020, Beautycounter grew 20 percent to more than $500 million in sales.

“We’ve pioneered and led the clean beauty movement and now this is a message to the industry that we are partnering with a formidable company in Carlyle and Jay’s [Sammons, head of global consumer, media and retail at Carlyle] team to really change our industry at large,” Renfrew said.

Sammons, who has also led investments in Vogue International and Beats by Dre, said Beautycounter aligned with Carlyle’s goal of “finding the brands of tomorrow and helping them get there faster.”

“This is a brand consumers love, we just need to make sure more consumers know about it and can find it in more places,” Sammons said. “Consumers expect more of the companies they are buying products from. They expect authenticity, and this is a company that didn’t just make up this approach.”

Beautycounter has been sold through select third-party retailers including Goop, Sephora and Target Corp. over the years, but will continue to focus primarily on the direct-to-consumer business, Renfrew said.

To expand its reach, the company recently launched livestreaming capabilities out of the brand’s Venice, Calif., store. “We really think that if we enhance our content and distribution in both organic and paid advertising, as well as enhance our overarching digital capabilities and then leveraging the incredible assets that we have in this community of brand advocates, we think we can reach many more people,” Renfrew said.

Asked about a possible initial public offering, Renfrew said she couldn’t speak to what the future for the brand would hold. Sammons said Carlyle’s goal was to “leave behind the company sometime in the future that’s better than it was when we found it,” and that the firm doesn’t prescribe its exit paths. “It always takes care of itself if you do the right thing for consumers and do the right thing for the business, and that’s what we’re setting out to do here.”

Carlyle made the investment from Carlyle Partners VII, an $18.5 billion fund.