Founder Gregg Renfrew talked exclusively to WWD about the launch she hopes will be a game-changer for the clean beauty brand looking to go from niche to mainstream.

The most searched beauty brand on Google in 2018, Beautycounter is gearing up for its biggest launch to date with Countertime on July 9. The six-product, antiaging skin-care range is formulated with a combination of plant-derived ingredients the brand is calling “Retinatural Complex” (a mix of buzzy bakuchiol and Swiss alpine rose). In the works nearly three years, Countertime is part of a new push into performance products for the brand sold online, in stores in New York and Denver, and through 45,000 independent consultants, which sources say did $325 million in sales in 2018, and is on track for 35 percent year-over-year growth.

Founder Gregg Renfrew and chief merchandising, marketing and product officer Michael McGeever talked exclusively to WWD about the launch they hope will be a game-changer for the brand looking to go from niche to mainstream, and offered a first look at their new lab, where chemists conducted more than 100 development trials for Countertime, including testing for trace contaminants in raw materials ranging from rose petals to $1,000/kilo hyaluronic acid.

“For a long time, if we won a beauty award, it’s been the ‘best of natural’ or ‘best of indie’ category. We want to be the best of the best,” said Renfrew of the direct-to-consumer brand she founded in 2013, and has built grassroots-style, not on celebrity faces, but on the pillars of California cool, wellness and political activism, which has extended to lobbying the U.S. Congress for more regulation of the cosmetics industry. “With this launch, we’ve delivered as good or better than all the antiaging lines, minus the 1,600 ingredients they continue to use. It’s not that we are part of the clean movement, we are the future of beauty.”

Bringing R&D in-house and hiring five full-time chemists last year marked a key milestone for the brand whose minimalist-looking, back-to-nature bestsellers include Dew Skin Tinted Moisturizer ($45), CounterSun Mineral Sunscreen ($39), Sheer Lipstick ($32) and Cleansing Balm ($69). “The company was founded on me wanting to get safer products into people’s hands…But at the end of the day, a woman is going to pull out her credit card because of performance,” said Renfrew, a former fashion chief executive, wearing minimal makeup, a shoulder-robed Gucci blazer, ripped jeans and heels. “Under Michael’s leadership, we’ve taken performance to a different level without using ingredients we find to be questionable.”

“When we sat down and said ‘OK, what’s the game-changer that will say clean can do anything?’ We felt it was skin care that had a clinical level of performance but not necessarily using clinical ingredients,” said McGeever, who joined the brand in 2016 after working at Sephora and Kendo. “Retinol is the clear performance ingredient driving most of the clinical and traditional brands, but there is a reason it’s on our Never List,” he said of the brand’s list of no-go ingredients, pointing to concerns about photo-toxicity, skin irritation and flakiness and potential carcinogenic properties.

“Bakuchiol has long been used in Ayurvedic and Chinese medicine for treating skin issues. Swiss rose grows way up in the Alps, in a harsh environment with low oxygen and moisture. Bakuchiol to repair and alpine rose to protect — together they are a fantastic combo,” McGeever said of the formulation that is the common thread across the product offering, selling for $267, which he said will eventually replace the antiaging Rejuvenating line launched in 2014. 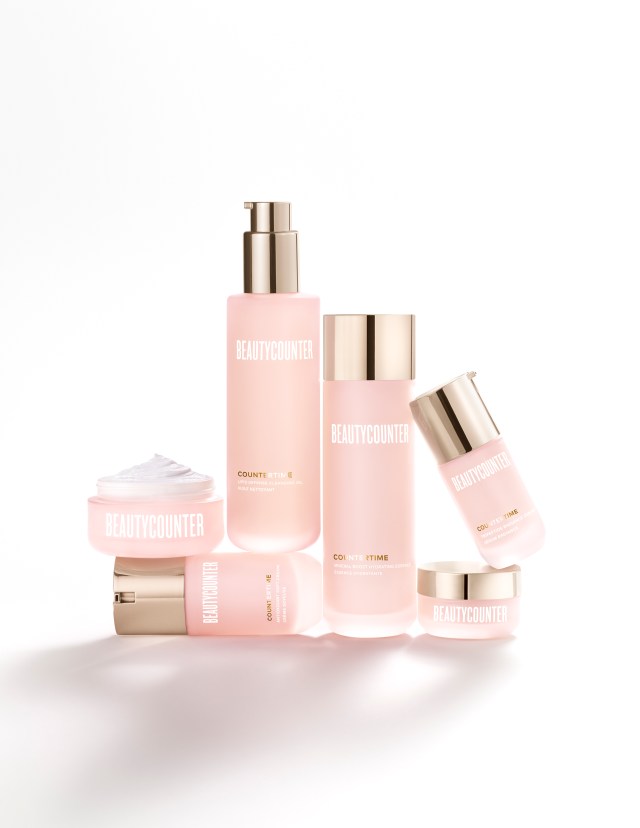 But the star product is the Supreme Cream ($89) he’s hoping to position alongside La Mer and La Prairie’s luxury offerings. “When you look at those luxuriant creams from other antiaging brands, they are made using mineral oils and petrolatum which gives you that gorgeous slip, but you are putting things on your skin that aren’t healthy. We did it using shea butter, cocoa butter and coconut-derived emollients to replicate the texture,” said McGeever, touting the line’s Millennial pink glass jars and bottles as recyclable, and sourced from North America, as opposed to Asia “so the impact of the 5,000 miles less traveled is a good one.”

“There are a lot of brands that come out with a fun little scoop, but at the end of the day, when you’re driving volume and putting hundreds of thousands or millions of products into market, that fun little scoop goes to landfill. We’re trying to lead here,” added Renfrew.

Countertime will launch with the tagline “Better With Age.” “It’s about aging gracefully,” said Renfrew, adding that for her, “Turning 50 was hard to swallow…We’re saying you can look amazing at any age. Because the reality is you can’t stop the clock, but you can feel more confident. Traditional brands define beauty as what a supermodel looks like. But you can look like your version of a supermodel.”

As it comes of age, Beautycounter, which raised $65 million in 2018 from private equity firm Mousse Partners, is exploring more brick-and-mortar, with an L.A. store likely to be next. On what’s driving sales, Renfrew said, “Our consultants who are most successful are using their social networks and blogs and digital influence to drive traffic, and then often will be meeting up in real life or sending people into our stores,” she said. “That’s been a game-changer for us having physical spaces. It allows the brand to come to life.”

Although Beautycounter is now multichannel, having also done collaborations with Target and Goop, Renfrew is still committed to the direct-to-consumer, peer-to-peer consultant business model. “I wanted to build a movement through people…When I started working on this in late 2010, I knew department store distribution of beauty was waning, going, going, gone. People were looking to influencers to make purchasing decisions. I thought there was an opportunity to educate and allow the touchy-feely experience of product with friends. If I have any regrets, it’s that I didn’t embrace or recognize the emergence of the digital ambassador and advocate and give her the tools. I’m frustrated with myself with the way we’ve approached tech,” she said, adding that the brand is investing in a new digital platform to allow consultants and customers to interact in different ways.

She said she’s also committed to tackling supply chain transparency, turning the conversation back to the brand’s new R&D lab. “Our job is cumbersome trying to bring clean ingredients to market. When you talk about the millions invested in hundreds of tests, and then to focus on trace contaminants rampant in the supply chain, it’s an arduous job,” said Renfrew, explaining that when her chemists started seeing high levels of phthalates in organic roses, they had to track them to a supplier in Bulgaria that was picking roses, putting them in plastic bags, and leaving them in the sun for the phthalates to leach into the petals. Beautycounter now requires burlap bags to be used instead of plastic to pick and transport the roses. “We had to do a lot of work to find out where that was coming from,” she said, renewing her commitment to getting Senators Dianne Feinstein and Susan Collins’ bipartisan Personal Care Products Safety Act bill through Congress, which would require the FDA to evaluate a minimum of five ingredients found in personal-care products per year. Renfrew is also in favor of increasing regulation of ingredients imported into the U.S. and holding companies accountable, even as her own has faced criticism for everything from high product prices, to limited compensation for its MLM consultants.

“We don’t have all the answers, I never said we do. Perfection is not where we are today. We do the best job we can,” said the founder, whose mission has been inspired by Al Gore’s “An Inconvenient Truth” and the work of fellow California company Patagonia. “We try to create the safest, highest-performing products we can and bring consumers along with us.”