Morphe is aiming to be the specialty multibrand beauty retailer of the future.

Inside a Morphe retail store.

The digitally native brand is ready to move beyond the buzz of its latest influencer collaboration. This year, Morphe is turning its sights to retail, with ambitious plans to start building out its store fleet and merchandising more third-party influencer beauty brands.

Morphe has already started quietly stocking products from a handful of influencer brands, many of which have previously only been available online. But the company is looking to diversify its offerings with new product categories, like skin care, clean beauty and wellness, according to Eden Palmer, Morphe’s vice president of merchandising.

As part of that plan, Morphe anticipates increasing the number of outside brands to between 20 and 30 percent of the overall assortment.

“We want to expand the category offering beyond makeup,” said Palmer. “Makeup is hitting the cycle where it’s starting to downturn…we’ve watched skin care grow over the last few years, and that has grown into the body business coming back on the scene. Hair is a big category, wellness — we’re not giving our customer anything within these categories, and she’s buying it elsewhere.”

As Morphe looks to compete with “elsewhere,” it plans to build a tight product assortment for each category, versus bringing in slews of stockkeeping units, Palmer said. The idea is for stores to be a “jewel box” with a “hyper curated edit” that results in Morphe stocking “the very best of beauty,” Palmer said.

“No one wants to be overwhelmed like when they walk into a grocery store,” Palmer said.

Palmer joined Morphe in January after spending about five years with Sephora, where she ran the Sephora inside J.C. Penney color cosmetics business, which has around 30 makeup brands. Morphe also employs Kahla Broussard, a 20-year Sephora veteran, who is now Morphe’s vice president of retail sales and operations. She joined in September.

Morphe operates about 50 stores in the U.S., U.K. and Canada. This year, the plan is to open between 15 and 20 new stores, and expand more internationally in Europe and Australia, Morphe executives said. More third-party brands and non-makeup items are expected to hit stores later in 2020.

Morphe stores are giving its consumers something they can’t get elsewhere — a chance to touch and feel their favorite influencer brands IRL, including Jeffree Star Cosmetics, Jaclyn Cosmetics and Lunar Beauty.

That assortment, and often the influencers themselves, have been able to drive crowds of customers to Morphe store openings.

A standard store opening brings out about 1,000 people, a Morphe spokeswoman said, but an opening with an influencer meet-and-greet can often bring between 3,000 and 5,000. James Charles drew a crowd of around 21,000 for the Birmingham store’s grand opening. 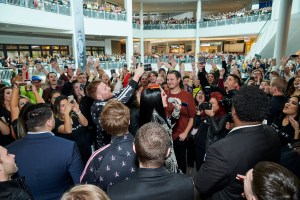 Jeffree Star and Shane Dawson outside a Morphe store.  http://www.camerongardner.com

Still, the retailer is up against stiff competition from the likes of Sephora, Ulta, Douglas and other specialty retail concepts. But so far, Morphe’s strategy of bringing influencer brands into an interactive retail environment seems to be working, said Kline project manager Naira Aslanian. “There comes a time of these influencers reaching their consumers tangibly, and that comes through a store like Morphe,” she said.

Beyond having a differentiated beauty offering, it helps that the retailer has a store experience that caters to its digitally native shoppers. Customers can film YouTube content in stores, if they’re into that, using products that aren’t easily found in other retailers. For brands like Beauty Bakerie, which also sells at Ulta Beauty, a specific assortment of products is created just for Morphe, said founder Cashmere Nicole.

“Our offering at Morphe is a sampler. They’re just getting a taste test of what our whole line has to offer,” she said.

“For the customer and even for myself, it has a cool factor about it that I can’t exactly wrap my head around,” Nicole added. “Everyone’s invited to the party.”

Under new majority owner General Atlantic, which bought a 60 percent stake in the business at a $2.2 billion valuation in 2019, Morphe’s aspirations extend beyond retail. The business is looking at buying and investing in other brands in order to build a platform that industry sources say has an eye on going public. Retail provides a way for the business to evaluate potential acquisitions close up.

“The same way Morphe was incubated and grown, we want to be out looking at the landscape, and seeing which brands we feel we might want to have a bigger relationship with,” Palmer said. “We can’t incubate every brand, but we can sort of suss out the brands that might have some chops, something special that we can get behind, and then we’ll kind of raise that brand up in the organization and talk about it a little bit more.”

Morphe is looking to build a platform of “brands similar in nature” to its own, per chief executive officer Myles McCormick, but has not yet made any investments.

“As we’re looking at brands, we want to look and talk to brands that are either digitally native or socially fluent, so it’s synergistic to our DNA and synergistic to this demographic,” Palmer said in a discussion about retailing, not acquisitions. The goal with new brands is to bring in cult-favorite products — like P. Louise eye primers, for example — that compliment, rather than compete with, the overall assortment.

Paige Louise, founder of P. Louise, said Morphe stores have allowed her U.K.-based brand to expand into new territories and reach new types of consumers. “I found through Morphe that we have a different type of clientele,” she said. In the U.K., P. Louise’s average customer age is between 16 and 21, she said, but in the U.S., it’s broader.

In addition to bringing on specialty brands, Morphe will build out a grab-and-go section later this year, Palmer said, “to drive acquisition and trial.”

“We can feature a product in its big-girl size, and catch her at the cash wrap with the minis,” Palmer said. 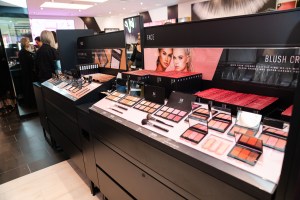 Morphe products in a Morphe store.

The brand is well-known for the Instagram-makeup vibe — bright eye shadows, heavy contour and highlighter that can be seen from space. It makes sense considering Morphe came to popularity hand-in-hand with the beauty influencer generation. Budding influencers promoted Morphe products, and in exchange, the retailer promoted them, through social media reposts and eventually through product collaborations.

But makeup sales are now in sharp decline, especially in the U.S., as consumers wear less makeup and prioritize skin care. Right now, Morphe doesn’t have skin-care products, but Palmer said the brand is prepared to shift to mesh with beauty trends, while still providing for those aiming for “the full beat look.”

“We want to stay young with our customer, we don’t want to age up with her,” Palmer said. “It’s a nuanced bent toward a younger, newer, fresher look. Once everyone starts to see this come to life, it’ll become clear how skin care lays into that, and hair and body lays into that.”

“We do not want to stay in a trend moment that isn’t going to move forward,” she added.