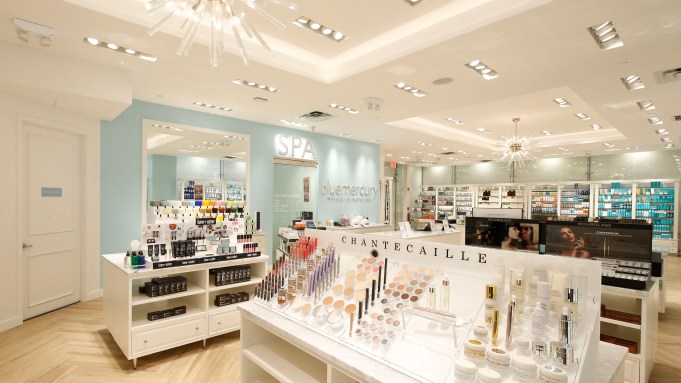 NEW YORK — Bluemercury has Sephora in its sights.

On Friday, the Macy’s Inc.-owned retailer will open its biggest store to date, a 2,700-square-foot unit with a dedicated spa room located at the base of the New York Hilton Midtown on Sixth Avenue here. The space will not only serve as the specialty retail chain’s flagship, but will double as an innovation hub and launch pad for new technologies and products before they roll out company-wide.

“Our stores and e-commerce are completely linked — it’s one big digital backbone. It’s all connected. I don’t even want to use the word omnichannel,” said Barry Beck, founder and chief operating officer of Bluemercury.

A prime example: a convergence of product reviews on bluemercury.com with those produced in-store via an interactive Beauty Connect mirrored screen, a triple threat source of education, point of sale and soon-to-be augmented reality tool that’s making its debut in this flagship. Regarding the latter, consumers will next month be able to virtually try on cosmetics and broadcast the experience to friends or family with live video, powered by FaceTime.

That is the cornerstone of the store, thanks to a 50-person in-house digital team and some work with outside consultants, according to Beck. He declined to give a first-year sales estimate for the flagship but said his newest door will do the most volume of any existing Bluemercury location.

“For 18 years, Bluemercury has been a best-kept secret — it was a neighborhood store…[and now we’re] transitioning from best-kept secret to a luxury brand and a household name,” Beck boasted. “I think the Hilton [location] catapults us to the next level. Now all of a sudden we’re an international brand. There are more than 1.2 million international visitors at the Hilton every year, it has 1,980 rooms. It’s the largest hotel in New York.”

In the past year, Bluemercury has increased its door count by nearly 50 percent, going from 100 stores this time last year to 145 doors with this location. An industry source said the business is growing at double-digit comps, putting sales at more than $300 million.

Beck declined to give sales figures or projections, but at the time of the Macy’s acquisition in February 2015, the 59-door business was estimated to be at about $100 million in annual revenue. In 2016, an industry source speculated that just two New York stores that opened last year could generate $5 million to $10 million in the first full year. This means that with 17 stores now operating in the New York area, Bluemercury could do more than $100 million in retail sales from its New York retail network alone.

“The shopping experience is not about technology, it’s about customer behavior. It’s about them getting a product in 30 minutes on the go,” Beck explained during a walk-through Wednesday morning, noting that the flagship will carry the largest assortment of product of all doors, including about 80 brands and 8,000 stockkeeping units. New brands joining Bluemercury with this door include Christophe Robin, Jillian Dempsey and Soleil Toujours, he added, noting that the Jo Malone interactive store concept will undergo expansion, and the amount of the company’s stores that carry Chanel will more than double from 14 to 30 this year.

But while a customer-centric philosophy might be driving Beck, it’s technology that’s driving Bluemercury’s expansion. Outlining an aggressive timeline, Beck put the number of stores he hopes to be operating nationwide at nearly 300 in two year’s time.

The store will also be a testing ground for checkout and delivery concepts, including a new service that Beck described as similar to Amazon’s Prime Now. The flagship is pioneering Bagless Shopping through Beauty Connect, a same-day, under-one-hour delivery in New York that will roll out with the opening of this door.

Beck said customers who pay through the Beauty Connect mirrored screen and don’t want to carry a bag out of the store could have products in their hands in less than one hour, with early tests around the city averaging a 29-minute delivery time. Bagless Shopping functionalities will expand in 30 days, he noted, including a feature powered by beacon technology that allows for delivery based on the location of the customer. Once additions have been added and any kinks are ironed out, the retailer will roll out under-one-hour delivery to its stores in top-performing markets.

“You come to the store and buy and someone meets you at the doorstep or at an event. They are tracking you on your way [if you opt in] and meet you right on the street corner. It’s a little Big Brother,” Beck said with a laugh.

Beyond digital innovation, Beck said the flagship provides two integral elements to the operation from a product standpoint. The space will pilot natural products before they widely enter the chain’s naturals program, he said. Most importantly, the latest store will be the testing ground for new products from Bluemercury’s proprietary, in-house skin-care and makeup ranges, M-61 and Lune+Aster.

Beck pointed out that M-61’s PowerGlow Peel — a one-step, exfoliating pre-soaked towelette containing glycolic and salicylic acid — is the best-selling product company-wide. One box of peels is sold every eight seconds, he said, adding that a recent production run of one million units sold out within eight months. If you average the 10, 30 and 60 treatment boxes that cost $28, $62 and $110, respectively, that would be the equivalent of more than $66 million in sales.

“Retail isn’t dead, it’s just changing — and we’re at the forefront of that. We have room for over 1,000 stores….There has been a lot of interest in international expansion and we are exploring that now,” Beck said, revealing that he plans to open about 40 more doors throughout the country next year and possibly another 100 in 2019. By October, Bluemercury will have six locations in Miami and Los Angeles and an eighth store will bow in Chicago next month.

“[Our] land expand real estate [model] differentiates ourselves from other retailers. I’m not just going to L.A. and opening one store; I am blanketing LA with stores. Most people come and put one store in and we put eight in,” Beck said.