Barry Beck and Marla Beck have been selling luxury cosmetics online since before the new Millennium.

Now an omnichannel business carrying 115 brands, Bluemercury was born as a digital-first company. In 1999, the Becks secured a million-dollar investment from Steve Case, a cofounder of AOL; Ted Leonsis, a former AOL executive, and Edward J. Mathias and Richard Darman of The Carlyle Group, and used the money to build a web site and assemble a digitally savvy team.

“We had 20 employees before we even had our first sale,” recalled Barry Beck.

Two months after incorporating the company, the Becks became aware of three competitor web sites with 10 times their amount of funding. They had already spent the majority of their investment on building Bluemercury’s web site — these days you can build one for free — and were down to their last $150,000. Unable to secure more funding, they did a 180 and bought a store.

“We never actually planned to own a store, but we were up against two problems,” Barry said. “Number one is the very ubiquity of what the Internet or e-commerce would bring to luxury brands like Chanel and Kiehl’s. And customers weren’t really accustomed to buying products online. Selling cosmetics in 1999 on the Internet was like giving a Tesla to the Romans: it’s great technology, but they had no idea what to do with it.”

Bluemercury.com has come a long way since its humble beginnings during the days of dial-up. The web site has been growing its number of unique monthly visitors by more than 50 percent year-over-year — a far cry from the “few thousand orders a month, at best” that Barry estimated the company fulfilled in its first year live. 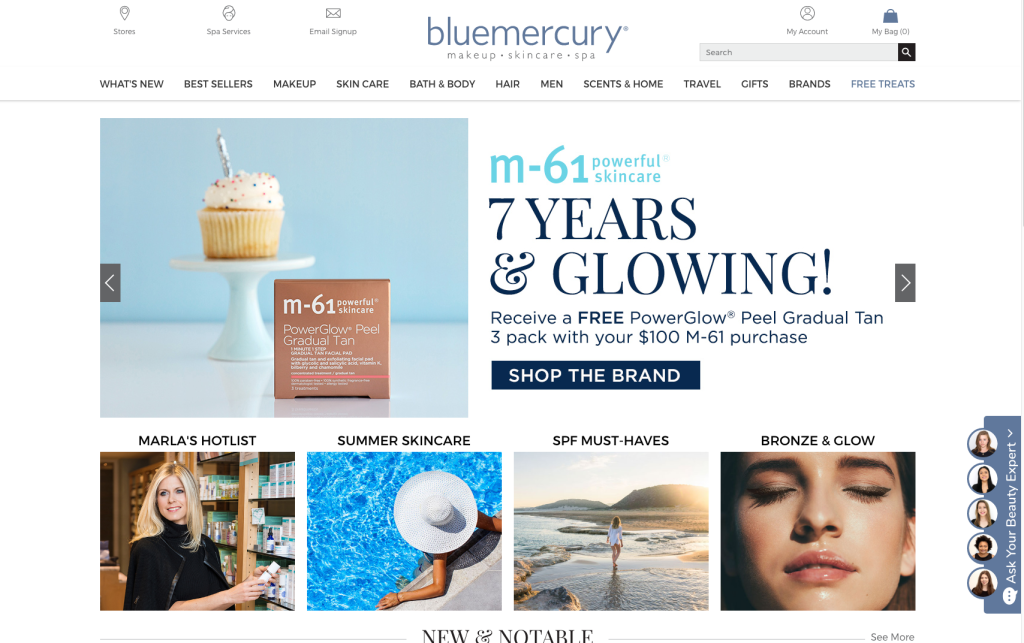 One of the key features of Bluemercury’s web site is the ability for customers to pose their burning beauty questions to one of the company’s five full-time beauty experts.

“Even our toughest critics and competitors have gone online and said, ‘Wow,'” Barry said. “At one point, one of our online beauty experts was competing with popularity and indexing on Google as high as Marla. It was a problem for us. I was like, ‘Marla’s more important.'”

The feature, he continued, allows Bluemercury to build trust with its customers and think of the web site as a resource.

“When we first started, we had this theory that through trust, our customers would come back and purchase,” he said. “We look to our web site as a great resource for our customers, full of information, full of tips and tricks, full-time beauty experts. We have a spa expert, a makeup expert, a seasonal specialist. Our customers are coming in and buying with us. We’re seeing incredible scale probably at a way higher clip than most of the people in the beauty category.”

The company has a 20-person digital team — the same size as when it first launched — that is continually focused on leveraging Bluemercury’s on-site search, expanding product recommendations and improving the checkout process. These changes have contributed to a “dramatic” improvement in the web site’s conversion rate, according to Barry.

“Our improving conversion rates are higher than almost anyone in the industry,” he said. “Purchasing is way up. We’ve seen that growing again in the double-digits. We’re catering to a higher-end client than most, so we’re more factual than glitzy and the client can get what they need on the web site with tons of information.”

There’s an equal focus on integrating technology into brick-and-mortar, as evidenced by Bluemercury’s New York City flagship and digital hub. One of the key technologies of the flagship is Bluemercury’s Beauty Connect mirror, which allows customers to scan a product, view information on how to apply it, and order it and have it shipped directly to their home.

These kinds of high-technology in-store experiences have changed customer interactions for the better, Barry said.

“Our stores are fully mobile — we’ve completely done away with our cash wrap in our stores,” he said. “We’ll check you out right in the spa where you’re getting the facial, we have all your information about your previous purchase histories, suggested products. If you’re out of something we can order it right there standing at the M-61 counter.”

Barry refers to social media as Bluemercury’s “golden thread to purchase,” noting that the company remains “channel agnostic.” Bluemercury does have accounts on Instagram, Twitter, Facebook, Pinterest and YouTube, and uses each to drive brand awareness by sharing new products, vendor collaborations and events with its followers. All of this contributes to “an increase in commerce,” he said.

“We beat Amazon at their own game,” he said. “Cosmetics is the least penetrated category online. Why? High-advice category, personal journey and this huge product proliferation. Because of technology, it’s never been cheaper to start a company. There’s always this need for good judgment.”

Influencers also play a major role in Blumercury’s digital strategy. Brands industry-wide are turning to their founders to be their front-facing influencers. For Bluemercury, that’s Malcolm Beck.

“People are really interested in what Marla’s up to,” Barry said. He once witnessed a customer in the Ardmore, Pa., location bring in a printout of product recommendations Marla posted on social media.

Microinfluencers are gaining popularity among beauty and fashion brands, and Bluemercury is one brand that is finding success with them. When opening a new store, the Becks and their team are keen to scout out local influencers who can share news of the store opening with their followers. So far, it is paying off.

“We’re seeing that these YouTubers and local influencers are more influential than almost any type of advertising, which is an interesting statistic,” Barry said. “Two years ago, 75 percent of the customers I talked to said they were influenced by traditional marketing. Today, it’s down to 25 percent and still sinking. We’re seeing that these influencers are picking up all of this advertising and are becoming a source of information for our customers and even taking the place of celebrities such as Gwyneth Paltrow. These types of celebrities are being overtaken by these haul bloggers on YouTube.”