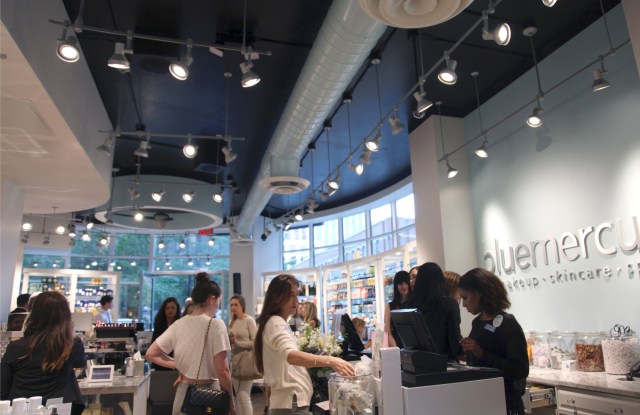 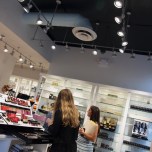 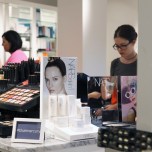 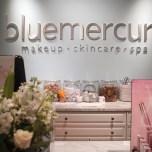 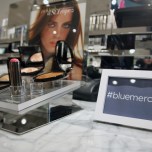 Bluemercury, founded in Washington, D.C., 17 years ago, is starting to look like a New York store.

“We are getting brand awareness,” said Barry Beck, chief operating officer and cofounder with wife Marla Malcolm Beck, who is the chief executive officer.

He made the comment during the recent opening of the chain’s 10th New York store in TriBeCa. The 11th store, measuring 1,700 square feet, opened the following day on the Upper West Side on Columbus Avenue and 68th Street.

Speaking of the 2,200-square-foot TriBeCa store on Greenwich Street, Barry said, “this store is scaling up at a faster rate than the other stores. We are getting brand awareness.”

According to sources, the TriBeCa store jumped to number one in sales among the New York units in the two weeks since the June 2 opening. It also ranks as one of the top stores in the country among Bluemercury’s 97 stores.

Part of that growing awareness stems from the locations the Becks choose. The specialty beauty chain, which is owned by Macy’s, has the operating philosophy of a string of neighborhood stores, Marla noted that 75 to 80 percent of the business for the New York stores comes from with five blocks of the front door. Neighbors can shop there for everything from their own needs to finding gifts.

Even though the assortment of 40 percent skin care and 40 percent makeup is described as upscale or “quasi-luxury”, neighborhood familiarity is a plus. “We’re a substitute drug store,” noted Marla Malcolm Beck. “We help democratize luxury beauty,” added Barry Beck.

She added, “people love to buy beauty where they are. That’s why we started in the neighborhoods.”

The newfound New York persona is reflected in the choice of the next store location. Where do New Yorkers go in the summer? The Hamptons, naturally.

Barry identified the next location as a 2,000-square-foot space at 67 Main Street in East Hampton. He added that it is being planned as a year-round operation, not a seasonal interlude. Opening day is scheduled for June 24.

The Becks declined to break out a sales projection, but one industry source speculated that the two new stores could do $5 million to $10 million in the first full year.

The TriBeCa store carries 60 brands, compared with 40 to 50 in the average shop. A suburban Bluemercury usually measures about 2,000 square feet — and can grow to 3,000 — and an urban unit typically has 1,500 square feet.

Marla said the fastest-growing category is hair —“crazy fastest growing. In 17 years, we haven’t seen hair grow at the pace it is now.”

Top-selling items in the TriBeCa store, so far, include the M-61 Power Glow Peel, which is the most popular item in the store, according to Barry, who just ordered another one million pieces for the chain. From Chanel, there’s Perfection Lumiere Velvet, Lune+Aster CC Cream and Lune +Aster Moonrise Glow & Contour Palette. Other hot-sellers are Oribe Impermeable Antihumidity Spray, St. Tropez In-Shower Gradual Tan.

Of Bluemercury’s 97 stores in its national chain, 14 of those units are located in the company’s hometown of Washington. The chain is expected to add 42 new stores this year. Of those, 18 will be shops-in-shop of parent Macy’s stores, and the remaining 24 will be heritage, or freestanding, units.