Bobbi Brown is ready for round two.

Four years after departing Bobbi Brown Cosmetics, the makeup artist-turned entrepreneur’s self-named brand, which under ownership by the Estée Lauder Cos. Inc. grew to more than $1 billion in retail sales, Brown is ready to launch another one.

Jones Road, a tightly edited line of makeup staples made with clean ingredients and designed for all ages, skin types and tones, makes its debut today on jonesroadbeauty.com.

The collection is reflective of a new non-corporate era in Brown’s professional life and the fundamental changes she’s noticed in the way women now want to wear makeup.

While the timing of the collection is certainly serendipitous — sources say her non-compete clause with Lauder ends today — the road back to makeup was meandering, according to Brown. The line comes after a busy four years, during which she got her nutritionist certification at the Institute of Integrative Nutrition, launched wellness brand Evolution 18, content site justbobbi.com and alongside her husband designed a The George Hotel in Montclair, N.J.

She got back into makeup slowly, she said — working on photo shoots, then mentoring young founders, then a makeup artistry Masterclass video.

“I never thought I’d come back to the cosmetics industry, but I’ve realized how much I love being a makeup artist — that’s what I studied in college. More than anything, I love doing makeup,” said Brown. “I realized, ‘You know what, I still have it,’ and I have this idea that I really need to teach people.”

Brown’s idea is a “simple one,” she told WWD, albeit maybe a little scary for corporate beauty giants that are still formulating makeup designed for 25-step YouTube tutorials.

Anyone who has followed Brown over the years knows her makeup philosophy is all about a natural look — the original version of “you-but-better.” The key difference between the Bobbi Brown Cosmetics line she launched in 1991 and Jones Road is that her new version of natural calls for less product.

The collection is launching with six stockkeeping units, including Brown’s hero product, Miracle Balm, $38, a light-reflecting “superproduct” that is part moisturizer, part skin tint. Other items include a mascara; $26 — ”the best I’ve ever used,” said Brown — and a lightweight plumping lip gloss called Cool Gloss, $26. Then there’s the Start-Up Kit, $68, which includes a Cool Gloss; The Best Pencil — a highly pigmented eyeliner — and The Best Eyeshadow, a “powder-but-never-powdery” shadow that “anyone can blend.” 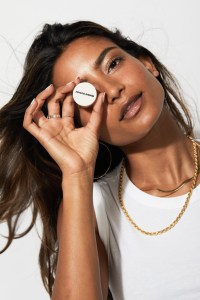 For Brown, these key products are really all a modern woman needs — no more two-step under-eye concealers, gel liners that come in a pot or heavy foundations.

She came to this new philosophy as she was promoting her ninth book, right as she was transitioning from her corporate life to the role of a self-funded entrepreneur. “When I was promoting my books as part of the brand, I had stylists and p.r. people and cars and drivers,” said Brown. “When I promoted a book after [I left Bobbi Brown], I’d get a blowout from one of those places, and show up in the studio in jeans and sneakers — and me doing my own makeup by the way — and I felt, ‘Wow, this is who I really am.’ I really liked being my simple, normal self.”

Brown has noticed this change in other women, particularly younger ones. “People wear makeup differently now than they used to — it’s not about covering up every imperfection, it’s about how you could look better.”

She sees Jones Road as a way to teach women how to look like they’re “not wearing makeup, even if they’re wearing a red lip.”

Brown admits the less-makeup approach might not be for everyone, but she’s not afraid of an educational moment.

“It’s funny, when I launched my brand, I remember having to go into stores and explaining to women how you could use yellow-tone foundation [to cover imperfections] and why your blush should be the color of your cheek and I worked really hard educating them in stores to teach them this new way,” she said. “Some people are going to have to learn again.”

Clean ingredients are important to Brown, and part of her modern philosophy as well. She formulated Jones Road using clean beauty retailer Credo Beauty’s ingredient standards, and she infused the products with lots of skin-care ingredients. “I wanted the products to feel good on — like really feel good on,” she said.

When it comes to launching a line under a name other than her own, Brown has no wistful thoughts. She found the name “Jones Road” on the Waze traffic app, and liked it because it reminded her “of the U.K., and an ‘old, trusted brand.'”

The line will launch direct-to-consumer and new products, including stick foundations — a signature Bobbi Brown item — are set to be introduced in January. Others will follow monthly. When asked about her strategic vision for the brand, Brown said she has “no five-year or even one-year plan.”

“I don’t need one,” she said. “I think things are going to evolve and change and I’m someone who likes to shift and be going different.”

Brown told WWD she has no intentions of making Jones Road into another billion-dollar brand. While she would not comment on sales figures, industry sources estimate the line could do $20 million retail in its first year.

She knows that between a global pandemic and an impending U.S. presidential election, the timing is a bit dramatic. But Brown and her entrepreneurial spirit, strengthened after four years without corporate backing, remain undeterred.

“Everyone and their uncle would say, ‘Why are you doing this now?” said Brown. “I say, ‘Why not? Am I going to wait for a perfect time? There isn’t a perfect time. We’re ready to go and I’m launching Monday.'”