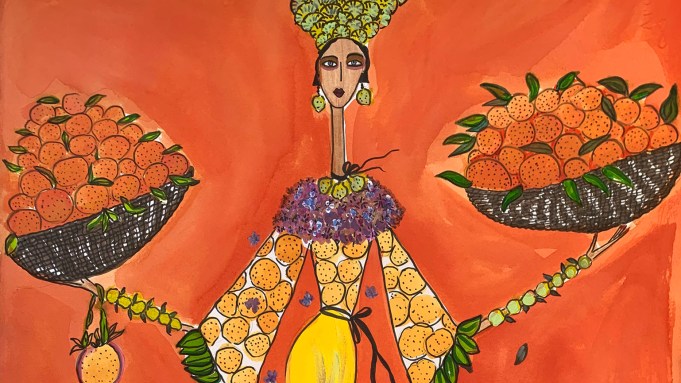 “If you ever meet a nose, they are people who are so passionate about the creation that goes into this.” So says artist and designer Rebecca Moses when talking about the inspiration for some of her latest work — a series of paintings and animations commissioned by The Fragrance Foundation for its third official Fragrance Day celebration on March 21. The fanciful paintings, each based on one of seven fragrance profiles, will be unveiled tonight at a cocktail fete at the Italian Trade Commission. “We’ve never had a presentation like this,” gushes Fragrance Foundation president Linda Levy.

Founded in the Forties by Annette Green, The Fragrance Foundation has a multifaceted mission. On Levy’s watch, it seeks to “engage consumers, nurture talent…[and] recognize people in the industry.” Fragrance Day and Fragrance Week serve all of those ends, along with, ideally, raising overall awareness for a complex industry.

Throughout her tenure, Levy has also sought to organize a board of more than 90 members while helping the fragrance world thrive in the digital age. “Social media…it’s a really big thing to us,” she says. (In recent years, up to 250,000 people have voted for The Fragrance Foundation Awards’ Consumer Choice campaign.) The group’s membership is comprehensive and far-reaching — behemoth groups including Estée Lauder, LVMH and Coty; major brands such as Tom Ford (an honoree at last year’s Awards), and boutique companies like Le Labo and Nest (whose founder Laura Slatkin was also honored in 2019) and retailers. While it might seem like a tough group to marshal, Levy is undaunted. “I have found that by putting them on committees and doing things they really want to do, they really embrace. We have four meetings a year. [All members] are required to be on a committee,” Levy says.

Along with engaging the heavy-hitters, The Fragrance Foundation is fiercely committed to nurturing smaller brands and businesses, as well as providing a roadmap for future stars in the industry. “We have a close relationship with FIT and Pratt, and now we’re going into a whole national college network,” Levy says. There’s also an “indie advisory committee” which doles out free advice for those looking to break into the business.

Moses notes that she was struck by the scope of the Foundation’s reach and “the way they address the industry from so many different perspectives. You have celebrity-ism with the celebrity fragrance, you have the medium-priced, you have mass, you have luxury.”

That said, challenges abound, particularly in the ever-crowded attention economy. While fragrance has always been a cornerstone of the beauty industry, with so much focus currently on woke skin-care and wellness brands targeting Millennials and Gen Zers, there is a sense that fragrance may be losing its toehold in the consumer consciousness. However inaccurate, fragrance development has been mythologized perhaps to an unfortunate degree — a world of shadowy apothecaries where perfumers whip up beguiling aromas full of complex, sometimes arcane notes. Intriguing, for sure, but such mental imagery runs contrary to the beauty world’s current zeal — and increasingly, consumers’ demands — for transparency and “clean” compositions.

Levy argues that the fragrance industry has for years shared information about ingredients and notes with consumers and continues to make progress in addressing their demands for transparency and sustainability. “One of The Fragrance Foundation’s key objectives is to educate consumers on ingredients and the industry’s progress,” she says.

Fragrance Day and Week are a high-profile part of that initiative, and TFF’s largest consumer-facing endeavor. “What we need is storytelling to the consumer, instead of hiding behind [the curtain like] ‘The Wizard of Oz.’ It’s a big thing,” says Levy.

Fragrance Day began its current iteration in 2018 after a little online research. “I looked on the internet,” Levy recalls. “There was Popcorn Day, Lollipop Day, Pizza Day. And I saw that there was this thing, Fragrance Day, that sort of happened but didn’t happen.” Levy took action, commissioning a mural from Brooklyn-based graffiti artist Marco Santini and embarking on a retail partnership with Bloomingdale’s. Year two brought a collaboration with Michael Avedon, who photographed 21 famous perfumers in the Foundation’s offices.

This year, a countdown will commence on March 1 and run through the 21, during which TFF will post daily content on Instagram. This will feature Moses’ artwork and news on spring 2020 fragrance launches as well as on classic fragrances. In addition, the organization is partnering with influencers.

Like fashion which, for the purposes of the show calendar considers any random number of consecutive days a “week” (five days? A week. Nine days? A week) the TFF isn’t a stickler when it comes to calendar counting. Fragrance Week will run for 10 days, from March 19 to the 28, with in-store activity focused on Madison Avenue. Digital events are broader, and Levy says the celebration of fragrance concept is starting to take hold globally, noting that the U.K. already has a Fragrance Week, and the idea is gaining traction in other countries as well.

The week on Madison Avenue will be marked by in-store signage, events and activations, and a VIP event for opening night, March 19. Fourteen retailers are taking part, including fashion brands Ralph Lauren, Giorgio Armani, Tom Ford, Carolina Herrera, Marc Jacobs and John Varvatos. Among the fragrance brands: Diptyque, Editions de Parfums Frederic Malle and The House of Creed. In addition, TFF is installing a pop-up shop of its own at 824 Madison Avenue at 69th Street, open from March 19 to March 22. Participating retailers will donate 15 percent of all fragrance sales at the VIP event and throughout Fragrance Week to Next for Autism, the organization founded by Slatkin and her husband, who are the parents of a son with autism.

Retailers not on Madison Avenue will focus their attentions on Fragrance Day, with in-store and/or online activity. They include TFF members Bergdorf Goodman, Bloomingdale’s Macy’s, Saks Fifth Avenue, Nordstrom, Sephora and Ulta. That day will see the densest activity, as brands tout their fragrances across the country “via social, digital and in stores, to ultimately drive awareness and sales of the fragrance category.”

That goal called for powerful visual imagery, according to Levy. Enter Moses and her whimsical-chic artwork. Her paintings and animations will be adapted into digital content, in-store displays and merchandise available for purchase as well as in banners that will herald Fragrance Week along Madison Avenue. The colorful, fanciful artworks are based on the seven major categories of fragrance — floral, fresh, citrus, fruity, sweet, woody and spice. Each piece features a woman — or, in the case of “Fruity,” a duo — whimsically accessorized with key trappings of her scent profile. “Sweet,” for instance, dons a coconut-shell bra and Marie Antoinette-style, cotton-candy coiffure, while “Citrus” sports a dress fashioned from three lemons. Each has “a certain levity and a certain humor that comes with a certain fragrance and a certain seduction,” Moses explains. “You really want to capture the emotion.” The accessories and outfits serve more than just a visually delightful purpose — they’re intended to be instructive. Moses notes that “people have to learn about the notes. The notes are the fragrance. If we don’t celebrate the notes, what are we saying? People don’t realize where these scents come from and how they’re developed and how they’re blended. There’s a real process behind it that’s never really celebrated.”

Levy enlisted Moses after happening upon her Capri-inspired drawings of mythological women whose outfits featured elements of natural food. “That’s when we fell in love,” says Levy. Moses agrees: “There was the spaghetti with zucchini and egg [look] and the red moon, the luna rosa. All of those things turned into clothes…I think when Linda saw that, she saw the potential for something to celebrate fragrance.” Levy then sent Moses the initial directive of the seven scent profiles. From there, Moses approached the project “like fashion design…each element is going to become a part of her, so let’s think accessories, let’s think of her footwear, let’s think of her stocking, how we can transform it.” The results are beautiful and highly informative, And, oh, yes, Instagram will love them.

With the visual campaign set and retail participation secured, Levy is eager for the countdown to begin. “I’ve met with our retailers, and everyone will celebrate.” she says, “And we have never had as beautiful a presentation as we have now. So here we go.”