Cardi B Shares Her Money Advice and Money Problems at Beautycon

In its fifth year in New York, Beautycon hosted its biggest celebrity speaker yet, who gave her genuine, unfiltered advice on topics like equal pay, taxes, managing one's own business and saving money.

By Alexa Tietjen and Ellen Thomas on April 8, 2019

Beautycon NYC closed out the Javits Center with a bang — more like a resounding “okurrt” — on Sunday. Rapper Cardi B’s presence was the most anticipated at the festival, as she was scheduled to give a talk, moderated by Beautycon chief executive officer Moj Mahdara, titled “Making Money Moves” with her sister, Hennessy Carolina. The panel was slated for 3:30 p.m. — pushed back from its original 2:05 p.m. slot — but didn’t start until around 5:15 p.m., as Cardi’s flight from Las Vegas had apparently been delayed.

The postponement caused much improvising and stalling on the part of comedian and Beautycon host Lala Milan, who at one point urged the crowd to take a moment of silence in honor of Nipsey Hussle, the rapper who was fatally shot in Los Angeles last week. The delay also gave way to tensions among audience members and eventually, a fight broke out.

Those tensions had been simmering at a slow burn throughout day two of Beautycon’s festival. Despite the fact that 2019 marked Beautycon’s fifth year hosting festivals in New York, the business, which is set to launch a festival in Japan in June, proved that it is not immune to growing pains.

Since Mahdara took the reins in 2015 as ceo, Beautycon has expanded from a single beauty festival in Los Angeles to events and experiential pop-ups in New York, London, Dallas and Dubai, branded merch and e-commerce. Last year, Beautycon New York drew 20,000 attendees over the course of the two-day weekend, up from 12,000 in 2017. This year’s festival saw a crowd of 13,000 attendees and over 90 exhibitors in the 15,500-square-foot space. Despite the difference in attendees, a press release stated that this year’s festival had sold out. 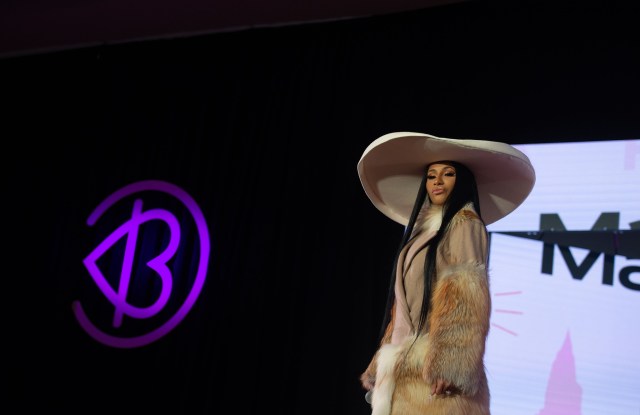 Cardi B at Beautycon.  ANDREW MORALES/WWD/REX/Shutterstock

By midday Sunday, complaints arose on Twitter that this year’s gift bags had fallen short of expectations.

One attendee tweeted, “I bought the $200 hauler ticket, which stated that we were going to get [$200] worth of makeup!!! Where is the makeup!!?! We literally got cleaning supplies! No palettes, blush, contour, highlighter!”

The cleaning supplies in question were from Love Home and Planet, Unilever’s incubated line of sustainable home cleaning products, an offshoot of sustainable beauty brand Love Beauty and Planet. Unilever was a major presence at Beautycon New York — Love Beauty and Planet was the festival’s recycling sponsor, with attendees posting photos of themselves to social media recycling an item in exchange for a branded tote bag. Dove and SheaMoisture also had some of the more sizable booths at the event.

Mahdara responded to the gift bag conundrum on Twitter. “I know some of you are really bent about these bags,” she said. “But listen, you know we will always get this s–t right because we’re here to stay for the long term.” Mahdara promised a “gift” for those who e-mailed Beautycon’s customer service.

The lack of a makeup present in the gift bag was perhaps due to the noticeable lack of prestige makeup brands that had dominated, and sparked the most excitement, at last year’s festival. Brands whose experiences last year were some of the more sought-after — Anastasia’s glow-stick ring toss game and shirtless men wielding power drills at MAC, Urban Decay’s truck — were absent this time around. MAC and Anastasia could not be reached for comment, and Urban Decay declined to answer why they were not participating in the New York festival this year.

In their place was an overabundance of hair brands, including Aveda, Sexy Hair, OGX, and Not Your Mother’s Naturals. There was also a strong multicultural brand presence in hair, including Uncle Funky’s Daughter, The Mane Choice, Taliah Waajid and As I Am.

There was a strong retailer presence — Target, CVS and Sally Beauty all had sizable spaces within the festival. CVS was promoting its Beauty Unaltered campaign, with a photo op set against a red backdrop, with the #beautyunaltered hashtag emblazoned in white.

Non-beauty — or, in some cases, beauty-adjacent offerings — were also popular with attendees. An eye doctor stationed at the crowded Air Optix colored contact lens try-on station estimated that about 1,600 people had stopped by the booth on Saturday.

Beautycon’s overall messaging is one of inclusivity and diversity — the festival’s credo was up for display before attendees filed down the escalator at the Javits Center, welcoming “all races, all genders, all ages, all countries of origin, all sexual orientations, all abilities, all religions, all natural beauties, all glamazons, all unicorns.”

The crowd over the weekend, which was primarily women of color and young girls, was certainly reflective of that credo, and Mahdara, herself a “gay, butch, queer, Muslim, Persian” spoke directly to that audience as she explained why she and Cardi would be discussing money. “Beautycon has been gathering a diverse culture of people who want to redefine beauty over the past few years —that’s what you see here throughout this entire venue. For us, we knew the next step had to be about financial literacy.”

When Cardi did arrive on stage — in a vintage Paco Rabanne coat and wide-brimmed hat — she was armed with an apology and explanation. “I overbooked myself, I’m always chasing the bag,” she offered, throwing in an “eow” to lighten the mood.

Mahdara, wearing a tie-dye hoodie, proceeded to ask the rapper, who took off her shoes mid-interview, a series of lengthy, often unfocused questions, to which Cardi responded with equally lengthy and unfocused answers that were simultaneously on-brand for her and inappropriate for the number of stroller-bound toddlers and midriff-baring preteens in the audience.

For the most part, no one was particularly fazed by Cardi being Cardi. After all, her unfiltered, genuine thoughts on topics such as equal pay, taxes, managing one’s own business and saving money may have been unorthodox but they were what everyone seemingly wanted to hear. As one 11-year-old girl said to her contemporary, “This is a once-in-a-lifetime experience.”

Below, some of the highlights of Cardi’s talk.

On equal pay:
“I get paid equally. As I came up, I used to see male rappers that we’d do hostings together, shows together, and I used to ask, ‘Bro, why this man making more money than me when I’m the one that bringing out all the b—–s?’ I’m deadass. For example, when I had 10 million followers before ‘Bodak Yellow,’ I wasn’t so big, but for some reason, I was always bringing the whole city out, but these artists were still getting paid more than me. So you know what I say? ‘I’m gonna stop taking bookings until you start paying me more’ and that leveled the f–k up.”

On stripping and what young women can learn from her:
“Don’t let nobody judge you because a lot of people be like, ‘Cardi, you ain’t had to strip, you had other choices.’ No the f–k I didn’t, b—h. A lot of people be saying that s–t because a lot of these h–s, they got these types of parents that let them live in they crib for a long time. That wasn’t me….Let’s be real: If you have a job that pays you $300 a week, b—h, where you gonna live with that money? You a college student. Where you gon’ live at? You can’t even rent a room. So what the f–k was I gonna do? I’m gonna do what the f–k I’m gonna do.”

On taxes:
“You know what I learned? I learned that Uncle Sam is a b—h.”

On managing one’s own business:
“Always take a business class because sometimes, the career that you study for one day is not gonna make you happy, and you want to become your own boss, but you can’t be your boss because you don’t know how to manage a business. Me, I got mad money, but you wanna know something? I have to hire business managers and pay extra money for these people that develop business because I didn’t [take] the class, so I gotta depend on somebody else to run my business. What’s the point of working just to be a slave to bills?”

On being business-minded in the age of social media:
“When I was 18, 19, 17 years old, I didn’t give a f–k about no f–king celebrity. With the Internet, there’s so many ways to make money, but y’all don’t even know that because y’all so worried about who Cardi B, who Kim Kardashian. Don’t let the gossip distract you of the fact that you could be making money right now. The Internet has so much possibilities, you gotta watch how these people are doing it. Everybody hate Fashion Nova, but me? I love Fashion Nova, but I remember when Fashion Nova started, I was watching the recipe. That is one of the most successful clothing brands. Watch that recipe. These bloggers, they making mad money out of y’all watching. Watch their recipe ‘cause you could be doing the same s–t.”

On what she wants her family legacy to be, in comparison to dynasties such as the Rockefellers, Gettys and Guggenheims:
“Some rich-ass, smart-ass, great-great-grandkids.”

On what she wants her grandchildren to say about her family:
“That we never gave a f–k.”

On saving money:
“You could save money when you can afford to save money because how you gonna save money and you got bills to pay? It just can’t happen unless you f—–g putting 50 cents every day in a piggy bank. You could save money when you can. A lot of people [are] like, ‘Damn, I’m 25 and I live in my mom’s house, I’m so ashamed.’ Don’t be. Because while you living in your mom’s house, rent-free, if she lets you live rent-free, that’s money that you could be saving.”

On not lending money to men:

“And then all the ladies, let me tell y’all something because y’all be, cover your ears [speaking to a young audience member on stage], please, y’all be getting d–kmatized.”