The organization was visionary with its early focus on networking — long before social media came to the fore. 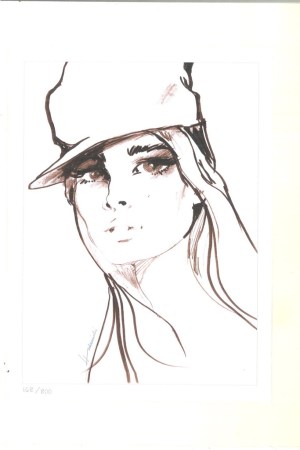 Three years ago, on a mild October evening, Joan Collins — draped in an emerald silk dress — took to the stage at a London hotel and happily accepted a Lifetime Achiever Award from Cosmetic Executive Women U.K.

Later that evening at dinner, a fellow guest asked about her makeup mantra, and she didn’t skip a beat: “The more the better.” It was an important night for Collins — and not just because of the award. After dinner at the Jumeirah Carlton Tower Hotel in Knightsbridge, fellow award winner George Hammer, the beauty entrepreneur and founder of Urban Retreats Ltd., went over to Collins’ table and the two started chatting.

“He sat with me, and he admired my look, and asked, ‘Why don’t you have your own line [of makeup]?’” Collins told WWD. She recalled saying to Hammer that nobody had ever come up with something she thought would really be right for her. He asked her to lunch the following week.

“And off we went,” said Collins. “It’s amazing what can happen when you just meet someone.”

Earlier this year, with support from Hammer, the 81-year-old actress launched her first color cosmetics line, Joan Collins Timeless Beauty, which she sells on QVC, joancollinsbeauty.com and at Urban Retreat in Harrods.

While Collins may have been amazed at what happened that night, those familiar with the CEW U.K.’s work wouldn’t have been so surprised. The can-do energy, collegiality and good vibrations in the room during the organization’s annual events are palpable.

“We have never really moved far away from our original remit of empowering women by giving them knowledge about the industry,” said Caroline Neville, the organization’s president, who has been on board since the group was founded in 1992.

“You have to join CEW through the mentoring and the networking, and you meet other people, share experiences and find new ways to do things,” said Neville, who founded the London public relations company Neville McCarthy in the early Sixties.

Neville said the beauty industry is different from many others in that there’s no clear professional road map.

“If you’re a designer, you can go to a fashion college and you could learn to cut and sew. If you’re in beauty, there is no formalized program for most girls. Maybe you get in as the junior — and you work your way up. But it can take quite a lot of time to do that. There are women who have been at companies for 20 years who are not reaching where they want to be. I saw this as a forum for women and as a way for them to have more formal training.”

Neville now works full time running the organization that was founded by Glenda Bailey, the editor in chief of U.S. Harper’s Bazaar, who was then editor of Marie Claire in the U.K. Neville became president in 1996. She said that while there is a formal mentoring program in place, she’s still doing one-on-one sessions, especially with the entrepreneurs. “I have so many new young brands come through the door. They come through every week, and they always seem so pleased that there is this first point of call to talk.”

The CEW U.K. also advises on business strategies such as exports, and last summer hosted a reception at the House of Commons, the lower house of the British parliament, for 140 government and industry leaders, called “The Shape of Things to Come — The Importance of the U.K. Cosmetics Sector.” The organization has also scheduled a meeting with Britain’s Chancellor of the Exchequer, George Osborne, later this year.

“We continue to bang the drum for beauty because we put so much into the economy,” she said, adding that the latest figure is 17 billion pounds, or $29 billion, according to HSBC and Ernst & Young.

The CEW fights battles on a variety of fronts, ranging from the challenges of e-commerce to marketing to women over 50.

“The CEW gives the platform to the brands to debate and argue. Recently, we had Feel Unique [the beauty Web site] and Harrods on stage together telling us about bricks and clicks and how you kept up with what your consumer wanted and how you got inside your consumer’s mind. The industry is moving at such a quick pace that we have got to have those issues on the stage,” she said.

As for the over-50 set, Neville said one of the biggest changes she has witnessed over the years is the acknowledgement — finally — that there is a woman out there who has crossed the half-century mark.

“We are now into a period where more of us are working longer. It’s not about being beautiful, it’s about having confidence — and makeup, skin care, grooming gives you confidence.”

She said Botox was a game changer, and since it’s arrived on the scene, she has had scientists take to the CEW stage to debate the cosmetic surgery issues of the day. “This is what keeps our membership growing,” she said.

One of the organization’s longest-standing members, Liz Earle, founded her namesake skin-care company just a year after the CEW U.K. was born, and has won 11 awards from the group over the years.

“We grew up together, and I have benefited so much from public awareness they gave me,” she said.

Earle added that the CEW U.K. was visionary with its early focus on networking — long before social media came to the fore. “They did so much to encourage collaboration, a sense of sharing and the exchange of ideas. And they have always recognized that all areas of the industry are important — design, retail, press, packaging — and not only product.”

Earle said one of the first things she has always done is to encourage her staff to become members of the organization. “It’s a wonderful way to involve them in the industry.”

She said that among the future challenges for CEW U.K. is “not falling behind with social media,” and building on its considerable charity work.

Giving back has always part of the organization’s DNA. “There’s nothing more beautiful than doing good,” Bailey told WWD. “I always thought there was an opportunity for the beauty industry to practice what it preaches. With CEW U.K., we produced a version of the “Look Good, Feel Better” program, giving products and makeovers to women undergoing chemotherapy. We started our program at the Royal Marsden [cancer hospital], and were even able to buy an ultrasound machine for the hospital. Now, it has been established throughout many hospitals in Britain. There’s no better look than that.”

Over the years, the organization has raised hundreds of thousands of pounds for ultrasound scanners and machinery to aid charity work, such as for The Eve Appeal, a charity that funds research into gynecological cancers. The CEW U.K. donates about 25,000 pounds, or $42,000, a year to the charity. CEW U.K. also publishes a free guide called Living & Working with Cancer, a national directory with information ranging from beauty treatments to disability rights.

Looking ahead, the challenges are numerous: Roisin Donnelly, chairwoman of CEW U.K. and corporate marketing director of P&G U.K. and Ireland, said the CEW U.K. needs to evolve as the industry evolves. “Historically, we have been a face-to-face people network. As we go ahead, we need to look at the potential of digital and global communication to help us communicate in the U.K. and globally without losing the human touch. We also need to help represent the British beauty industry on a global stage,” she said.

Neville added the organization needs to keep fighting to help women at work — and at home.

“If you look at the top jobs, I think, the women are always number two or number three. There’s still a way for women to go. It’s a good industry for women, a great place for them to be, and not everybody wants to have the very top job. There are other things to engage us — like having a family. Even at the very top, women talk to me about the issues of child-care costs, and trying to get that sorted. The pressure is enormous,” she said.

Neville noted that she has tried to involve the families of award-winners as much as possible in the events. “I ask the achievers to bring their husbands and their children to the evening, because I want them to see how proud we are of their mothers and what their mothers are doing when they are often about and traveling. This is what it’s all about: This is the industry, and they are part of an extended CEW family,” she said.

In October 2011, Joan Collins was no exception: The Hollywood star wasn’t alone on the night she accepted her award, but attended with her husband, Percy Gibson, and son — one of her three children — Alexander Anthony Newley.