Influencers are teaming with the masses.

A growing number of content providers, especially those falling in the micro or midtier range, are bypassing brand collaborations and going right to the nation’s biggest mass-market chains.

Drug and discount retailers hope the partnerships staunch the hemorrhaging of shoppers to online, specialty and prestige foes, and that teaming with a hip blogger can shake off the notion that such retailers are “my mother’s beauty” outlet in the minds of much-coveted Millennials.

The mass beauty industry could use the push. Nielsen data tracked through March 24 puts mass makeup and nail sales flat over last year. But there is a bright spot, according to Jordan Rost, Nielsen’s vice president of consumer insights: Retailers’ store brands have grown three times faster than the entire cosmetics category over the last five years and gained a full percentage point of share in the process. Euromonitor reported U.S. private-label beauty and personal-care brands produced more than a 4 percent share of market in 2016 (the most recent information released), up from 2.5 percent a decade ago.

Hence, the spate of influencer-led private-label retail brands. Recent examples include Walgreens Boot Alliance’s launch of cosmetics bags with YouTuber Judy Travis; Sally Beauty’s Collab created by a cadre of influencers; and CO Squared, an exclusive digitally native line from Walmart in partnership with model and influencer Coco Rocha. Target was early to the game with the debut of Kristin Ess hair care last year, which has held its own against brands from L’Oréal, Unilever and Procter & Gamble. The collection was just expanded.

While influencer brands are bubbling up, mass retailers continue a major thrust with their other owned labels. Walgreens just completed the second phase of its Beauty Differentiation program, hitting about 3,000 doors where its own logos such as No 7, Soap & Glory, CYO, Sleek MakeUp and YourGoodSkin get top billing. Walmart is the exclusive source for Hard Candy and a new natural brand called Found. Target’s proprietary lines are Sonia Kashuk and a new fragrance called Good Chemistry. And CVS is going full throttle with its Makeup Academy MUA line, which the company said affords it a chance to jump onto trends often faster than national brands. Amazon is making a big private label push, as its Whole Foods division, according to Vivienne Rudd, innovation and insights director of beauty and personal care at Mintel, who noted supermarket powers Aldi and Lidl have private-label personal-care brands that have high consumer loyalty. Even 7-Eleven just launched a makeup line.

“These are the new private brands,” said Scott Oshry, chief marketing officer for Maesa, which has developed several of the budding retail/influencer collaborations. “Early on beauty companies started tapping influencers to promote in a bigger way and now retailers are keying in and saying, ‘Wait a minute — why don’t we do it ourselves.”

The new slew of retailer-developed lines is similar to Sephora’s development of exclusive brands such as Fenty by Rihanna and Kat Von D under the Kendo division. “Private label has an objective to make more money for the retailer, but also offer something unique,” said Wendy Liebmann, founder and chief executive officer of WSL Strategic Retail. “In beauty we’re starting to see a focus on exclusivity and what can distinguish one retailer from another…and not just slapping the retailer’s name on something” The advantages of influencers, she said, is that retailers can handpick content providers they feel most effectively match their target market. Starting in a category like cosmetics bags at Walgreens, she said, is a good way to test the waters.

Lauren Brindley, group vice president and general merchandise manager for Walgreens, said the chain’s launch of six cosmetics bags created under the watch of Travis, known for her “ItsJudyTime” YouTube channel, aligns with efforts to “give our beauty customers more reasons to shop our stores.” The private-label sector of the cosmetics bag category in the mass market is up almost 7 percent per the most recent IRI drugstore data.

“We will see more [influencer exclusives]” said Liebmann. “Their private labels stand out on their own and don’t feel generic. They aren’t just about price.” 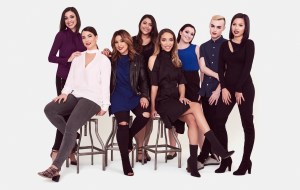 For its part, Sally Beauty leveraged the power of the eight influencers who created Collab to cost efficiently spread the word about the 203-stockeeping unit cosmetics line. Industry sources estimate the brand could hit sales of $30 million within the first year. And Walmart is harnessing the taste and sophistication of Rocha, who is said to have had her hand in everything from packaging to product, to develop the digital brand that will curry the tastes of a shopper base different from Walmart’s core consumer. While no details are available on pricing, Walmart’s Jet.com sells beauty at much higher ticket than Walmart with premium lines such as La Prairie and Dior. No further details have been released on the launch.

Kristin Ess’ collaboration with Target came from the chain’s interest in the hair stylist and content provider and worked with Maesa “One of their [Maesa’s] beauty-obsessed, social media savvy employees, Kamila Golebiewska, was following me on Instagram and had suggested me for the partnership and that’s how it all began,” Ess told WWD of the genesis of the hair-care line.

For retailers, access to influencers is an easier path than previous celebrity alliances, with the exception of Drew Barrymore’s Flower, which is said to have about $50 million in sales annually and recently launched in 500 Ulta doors. If the star doesn’t go all in on the brand, it loses its meaningfulness. Influencers have more on the line. And as far as consumers, Oshry said influencers are often perceived as more trustworthy because shoppers think “they are just like me.”

Influencers have more sway now with retailers because they’ve proven they can move the sales needle. “When they were starting out, they had to align with a brand to get into retail,” said Scott Fisher, ceo and founder of digital talent-first management company Select Management Group. “Now they can control their own marketing. They see value in going into retailer where more people can discover them.”

Beca Alexander, the founder of Socialyte, which customizes influencer digital marketing programs, said mass-market retailers wield a competitive sword in attracting influencers because of their market saturation. “It is actually easier for mass to work with influencers, because there is a lot more of the product available.”