Those expecting Miami Vice pastels or even a touch of Golden Girls were in for a surprise when Karl Lagerfeld unveiled his resort collection during the Chanel cruise extravaganza Thursday night. 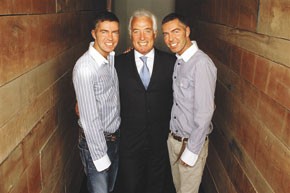 —  With a lifeguard perched above the pool, and double-C logo life preservers and beach balls scattered throughout, the Chanel cruise extravaganza kicked off on Thursday night.

Those expecting Miami Vice pastels or even a touch of Golden Girls were in for a surprise though. Karl Lagerfeld set the mood with an all-black start, from a sleek tuxedo to a slouchy blouse-and-pant combination that was more and than some of the world’s sunnier locales.

“It’s all about proportions, cuts, volumes,” Lagerfeld said pre-show. “There is not one line that is taken all through the collection. For cruise, you don’t do that. There are many looks and an attitude.”

Lagerfeld gradually softened the palette from black to pale pale greys, pinks and blues. Along the way, he played with proportion and detail on knits and draped gowns, many of which were adorned with feathers — a reference to a feathered pastel dress Coco Chanel had once created for Delphine Seyrig in “Last Year at Marienbad.”

Lagerfeld cited Brian Jones, the drug-addled Rolling Stone who was found dead at the bottom of his pool in 1969, as an inspiration. But besides “the androgyne attitude,” Lagerfeld said, there’s little hippie-drippy about this collection. “I don’t remember the Sixties,” Lagerfeld offered. “I was there, but I don’t remember.”

Much better is his memory of Esther Williams movies that he used to enjoy so much as a child — so much that the ended the show with synchronized swimmers from the U.S. Olympic team jumping into the water for a quick ballet, culminating in the lineup forming the house’s logo.