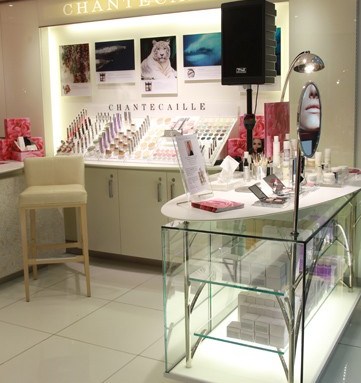 Sylvie Chantecaille has set up shop at Bloomingdale’s 59th Street flagship with her eponymous beauty brand. But it’s also a homecoming of sorts.

Although it marks the debut of her brand on that selling floor, Chantecaille noted that she had opened a Prescriptives counter there 25 years ago in the same 260-square-foot space when she was with the Estée Lauder Cos. Inc.

She anticipates that the Chantecaille brand will fare better.

During a ribbon cutting Friday, Chantecaille brightly reported that the shop was “off to a great start.”

Howard Kreitzman, vice president and divisional manager of cosmetics and fragrances, added, “We are very happy with the results.”

The flagship counter, which is Chantecaille’s fourth in the Bloomingdale’s chain, began doing business in November. Although none of the executives would cite numbers, industry sources report that the new shop hit its first-month plan of $40,000 in sales. Sources speculate that sales could hit $1 million during the first year.

The brand does roughly 60 percent of its business in skin care, while the balance is predominantly makeup. Chantecaille markets five premium priced fragrances at Neiman Marcus in an exclusivity deal slated to wrap at the end of the year. The scents are expected to be introduced in Bloomingdale’s in spring.

The design of the new shop is based on nature, with organic shaped components. Pointing to a rose-adorned glass and metal counter, Chantecaille said, “I wanted it to be intimate and natural.”