Beauty spending is bouncing back, and as most factories go back to work from March, the disrupted global supply chain is set to recover.

A woman wears a mask as she works in shopping mall cosmetic department in Guangzhou.

With Wuhan, a city of 11 million and the epicenter of the coronavirus outbreak, in lockdown for more than a month, and factories around the country either shut or operating with a skeleton staff, buying a lipstick or face cream would seem to be the last thing on anyone’s mind.

But in China, beauty spending is on the rise after a sharp drop in sales over the last two months.

A good portion of Chinese beauty brands have shown resilience amid the outbreak, finding ways to sell and promote their products, focusing on online sales and making donations to fatigued hospital workers. As most factories go back to work, the global supply chain has also been slowly recovering. 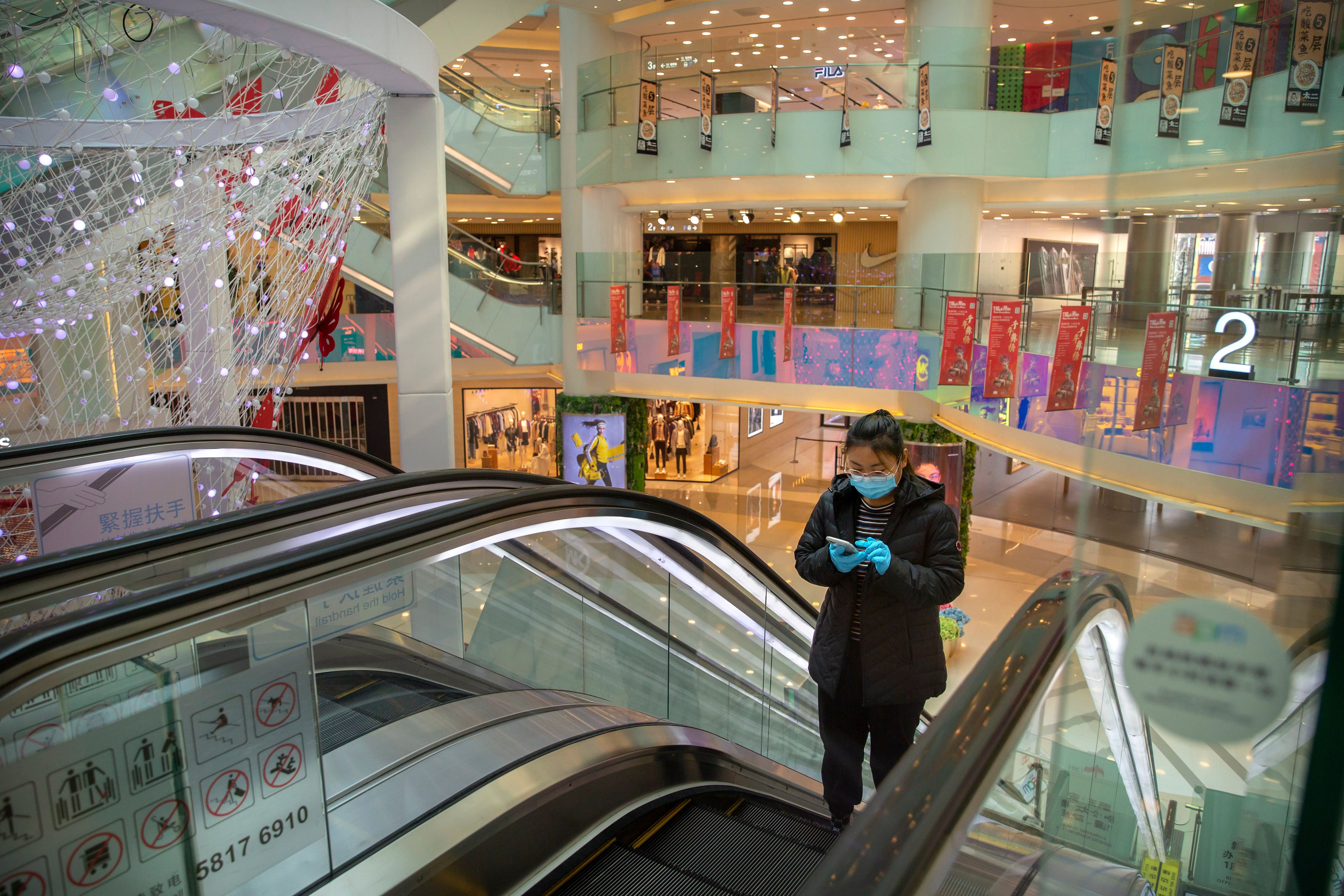 A woman wearing a face mask and gloves rides an escalator at a mostly empty shopping mall in Beijing.  Mark Schiefelbein/AP/Shutterstock

At the beginning of the outbreak, which coincided with the Chinese New Near holiday in mid-January, the nation was ready to spend a big chunk of money on beauty and skin-care products, as they are popular gifts for workers who travel from the coastal industrial and commercial hubs such as Shanghai, Guangzhou and Shenzhen to visit their families in the countryside and less-developed areas.

But after more information was disclosed about the severity of the pandemic, and Wuhan and its neighboring cities were put on lockdown, the appetite for spending disappeared, people stayed home and the national holiday was extended. Shops were closed and public events were postponed or canceled.

Forest Cabin, or Lin Qin Xuan in Chinese, a Shanghai-based skin-care brand best known for its camellia oil, said 90 percent of its sales evaporated during the Chinese New Year holiday period. “We will have to file for bankruptcy if the situation persists,” founder Laichun Sun told the local press.

Some 157 of its 337 points of sales across China were shut due to government regulations and safety concerns. Sun turned to the increasingly popular live-stream, hoping to boost sales, but only two people watched his live-stream debut on Alibaba’s Tmall.

Sun then penned an open letter to his customers, calling for support, explaining the situation and vowing donations to nurses fighting at the frontline in Wuhan. He believes camellia oil can repair the damage to nurse’s skin after they wear masks for a long period of time.

His letter soon caught the attention of the public, thousands watched his live-stream afterward and sales soared.

“I promised to donate 100 renminbi with every order received and the sales were doubled,” he told WWD China. “We were planning to adjust our annual KPIs and budgets, but after the live-stream, we decided to keep our goals for 2020.”

Lei Sun, chief marketing officer of its parent company Yat Sen, told WWD that most of Perfect Diary’s stores have been closed since late January, and that it halted its off-line expansion plan. Its online business continues to operate as usual.

Shanghai Jahwa, one of China’s oldest and biggest beauty conglomerates, said on top of a shift from physical retail to online shopping, the demand for antibacterial products has soared, and its factories should return to full force by late March. 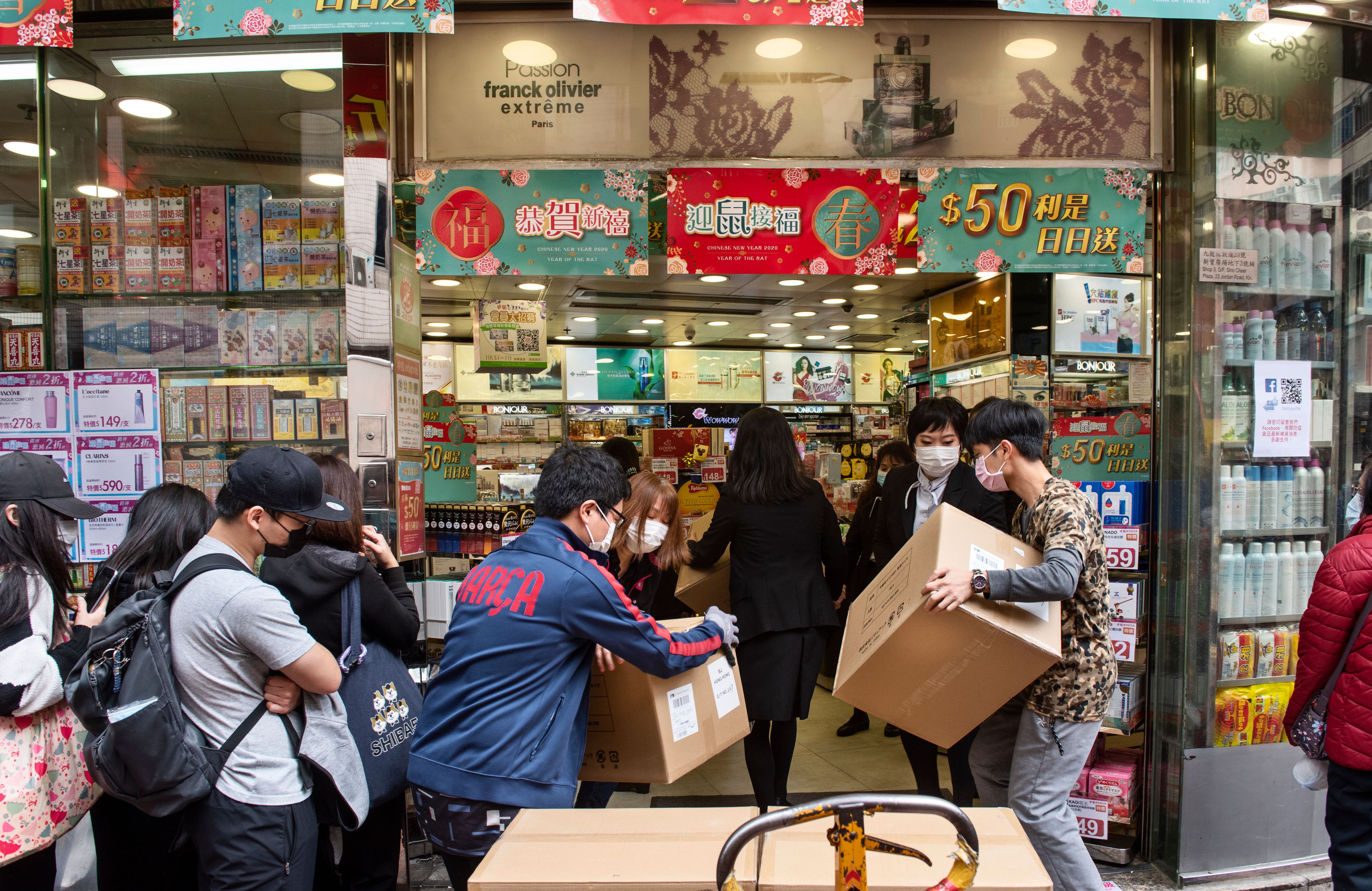 Employees at a cosmetic shop receive 460 boxes of face mask stock while customers wait in a line in Hong Kong.  Miguel Candela/SOPA Images/Shutterstock

Not everyone has seized the online opportunity. Bao Ye, an industry observer and partner at Jumeili, a Chinese beauty trade organization, said the impact of the disease on physical retail has been severe.

“Beauty brands didn’t have any business during the Chinese New Year holiday period, and most of them have very low penetration online. From what I have seen, not a brand has recovered from the loss. Most of the positive news is just for publicity,” he said.

Yanzhuo Li, a retail distributor of heritage beauty brand Pechoin, said the loss from two weeks of store closures is around 500,000 to 800,000 renminbi.

Yixiong Lv, founder of Chicmax Group, the owner of popular beauty brands Kans, One Leaf and Hanamino, said he has complained about Shanghai’s proposed policy on paying staff their full salary even though no one is working.

“Paying full salary and social security for my 7,000 employees while no one is working will be a huge burden to me. I will be out of business within months if the policy is passed. The most important thing now is for the company to survive,”  he said.

According to data from Tmall, a key indicator for beauty brands’ online performance in China, January sales of cosmetics and skin-care products were down 50 percent on average compared with the previous 30 days. February sales did see a lift, especially in the category of facial care, masks, lip care, feet care, T-zone care and travel set subcategories.

Bao admitted that the outbreak has accelerated the popularity of live-streaming on various social media and e-commerce platforms, including Taobao, JD.com, Secoo, TikTok, Kuaishou, Weibo, Xiaohongshu and WeChat.

Chloé Reuter, founding partner of Shanghai-based creative agency Reuter Communications, which has just revealed plans to expand into Europe and set up an office in London, said many brands have redoubled their efforts to engage on social media.

“Chinese consumers are used to buying via live-stream, a tool that has been vital for brands wanting to speak to their Chinese customers during this difficult time of restricted travel and closed shopping malls. Live-stream is not only about sales, but should be seen as a form of media that can entertain those stuck at home,” she said.

“I have bought twice from live-stream and you really get good value from it,” said Lu of the channel, where products are 25 percent cheaper on average. “I love Austin Li’s streaming. He is funny and has his ways to make a product look desirable. When you see so many people commenting on the product, you just want to have it, too,” she said.

Li is China’s top beauty influencer. He posts or live-streams his honest reviews of lipstick or skin-care products on Chinese social media platforms and millions buy into his recommendations. Alibaba’s founder Jack Ma even did a lipstick review contest with him. 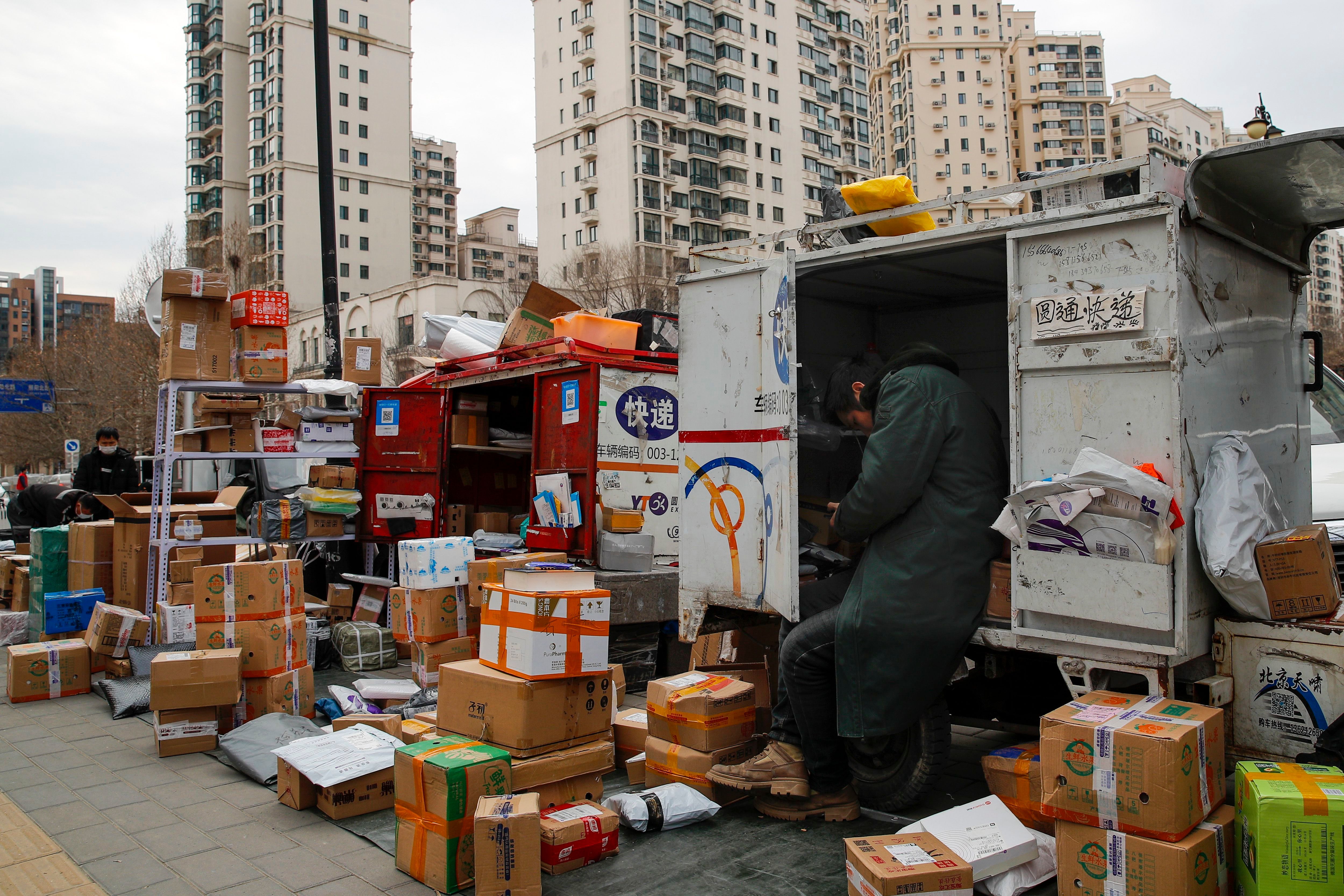 Delivery workers sort out parcels piling up at a pickup point outside residential apartment buildings closed off to nonresidents following the coronavirus outbreak in Beijing.  Andy Wong/AP/Shutterstock

But the delivery experience hasn’t been as smooth as in the past, due to the impact of the virus. Shuang Wang, senior designer at a Shanghai-based fashion brand, said deliveries have been taking much longer, and that she had to hunt for her package among the hundreds of parcels on the street as couriers who usually deliver to her door are barred from entering the development.

Jo Lin, founder of the e-commerce incubator Bairun, said despite a boom in online sales, logistics barriers resulting from travel restrictions are hindering brands’ opportunities for growth. In February, Alibaba Group warned of a drop in revenue at its key e-commerce businesses.

“Beauty sales on Tmall were dropping. Even if you were receiving lots of orders, you could not deliver the products on time. That’s why most of Tmall’s big promotional events got canceled while you see a 30 percent jump on JD.com. Its in-house logistic network covers first-tier cities to third-tier cities,” Lin said.

The fact that the virus appears to have peaked in China, and that most factories will be up and running by the end of March, means that beauty businesses will be able to switch back to growth mode.

J.P. Morgan estimates that China is the second biggest market for luxury beauty in the world, accounting for 25 percent of all sales, with retail, travel and purchases abroad factored in, and is set to overtake the U.S. by 2023.

Sallie Berkerey, managing director of Cosmetic Executive Women U.K., said: “Everyone’s quite relieved to have a sense that in China, it’s been acted upon quite quickly, and the virus has been contained.”

“The traveling Chinese customer is very important globally for all of the beauty companies. With China hopefully returning to some kind of normality soon, people will be traveling again,” she added.

A source at a leading packaging firm said the situation was “a mess,” but things are returning to normal as the Chinese government has been pushing all factories to go back to work since the beginning of March. 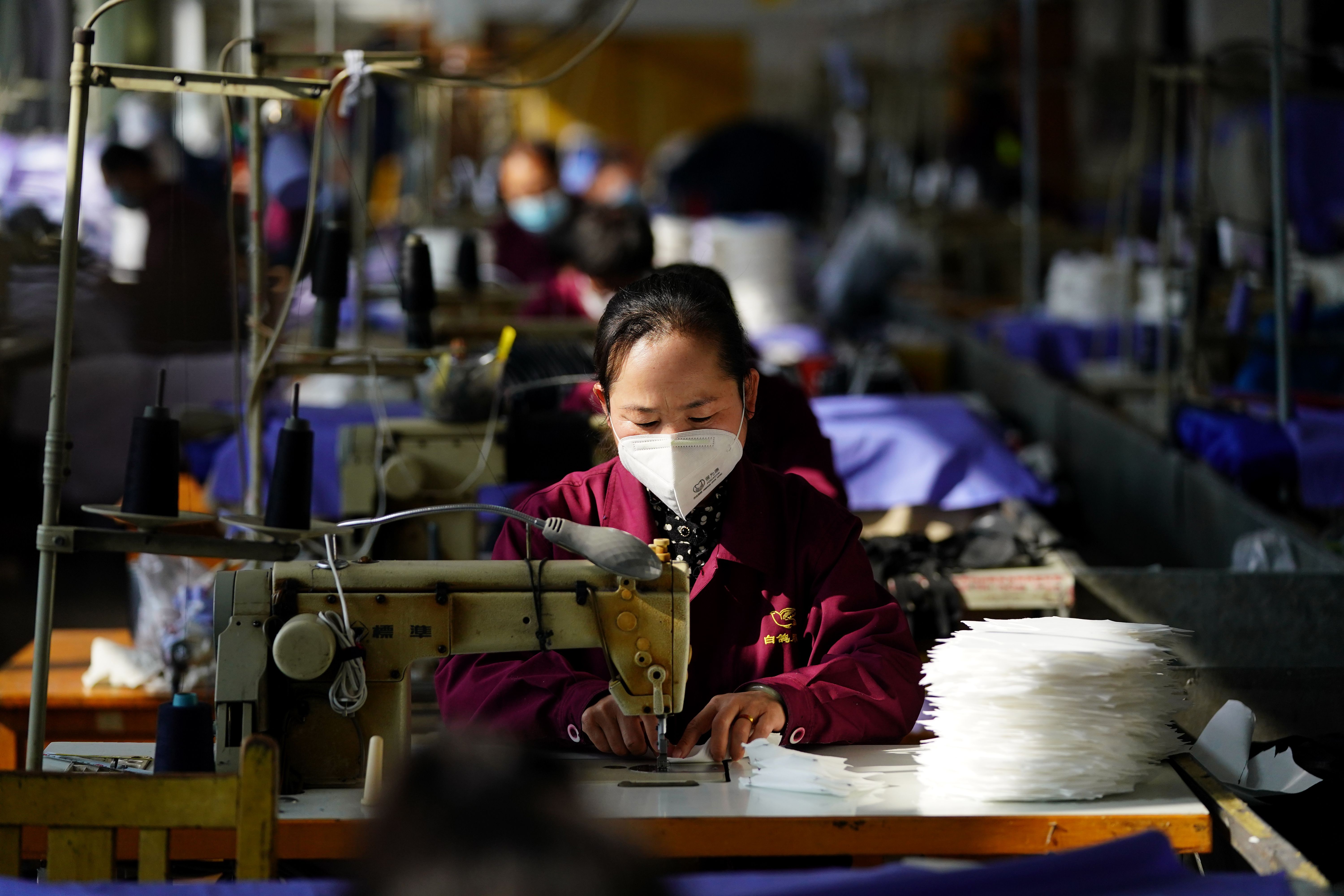 A worker makes face masks at the workshop of a face mask company in Taiyuan.  CHINE NOUVELLE/SIPA/Shutterstock

“We got delayed on a lot of orders, and the delays are two to four weeks. For some reason it was much more affected in the south around Guangdong province. They are much more strict in terms of the documents that the factories have to provide to reopen. So some of the factories are still only running at 20 to 30 percent capacity,” the source said.

“We have a lot of customers we need to arrange air freight for since they cannot wait for one more month on the sea. It’s twice the price usually depending on where you send the goods,” the source added.

“Now it’s been one month, overall I would say 70 to 80 percent of the factories have resumed so we are pretty much back to normal lead times,” the source said.

Berkerey added that “there is an optimism among our members that we can bounce back within eight to 12 weeks, as soon as containment point is reached. Factories could get back to full capacity by mid-April, and things would come back fairly quickly.”

Even before the tentative recovery in the beauty industry, some companies were stepping up with charitable contributions: Jala Group, parent company of Chinese beauty brands Chando, Maysu, Botanical Wisdom and Biorrier, donated 5 million renminbi to the Wuhan Red Cross and 2.36 million renminbi worth of skin-care products to 88 hospitals in 24 provinces and sent 15,000 hand creams to hospitals in Wuhan.