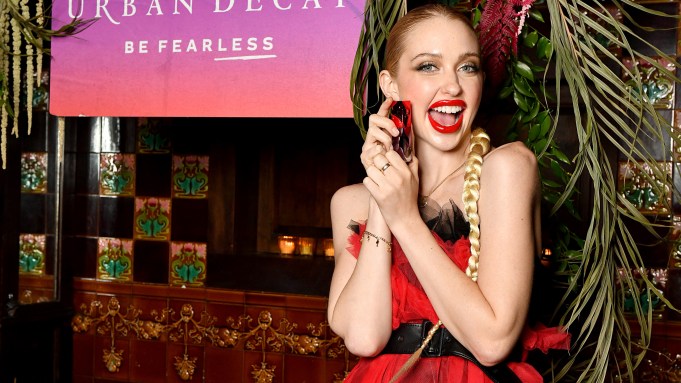 The model and actress, who had her breakout role in season two of the popular teen drama, was like many, influenced by the graphic and glittery makeup looks showcased in the first season of “Euphoria” in 2019, which encouraged her to experiment with her own colorful and bold looks.

It was a full-circle moment when she was tapped for the role of Faye in the show’s second season, which aired this January.

“Imagine your favorite show and then they ask you to join that show. How crazy would that feel?” Cherry said during a press event for her recent Urban Decay liquid lipstick campaign. “It was just an absolute whirlwind, but everyone was so amazing the whole time. They gave me an incredible experience and I’m just so happy that I was able to do that.”

Cherry also commented on the show’s impact on beauty trends, stating: “[‘Euphoria’] is extremely beauty-focused, and that’s what is really cool about it because there aren’t a ton of shows that are really beauty-focused. It’s cool that they do that and it’s really unique because they kind of create this whole universe within the show.”

While Cherry has been inspired by the bold beauty in “Euphoria,” she explained her daily beauty look is primarily a no-makeup makeup look, with the exception of a red lip.

She explained lip products have always been her preferred go-to makeup look, so naturally she wanted to work with Urban Decay on its new Vice Lip Bond Liquid Lip Color collection.

Cherry appears in the product’s campaign sporting a bright red lip stain. She explained she was drawn to the liquid lipstick collection because of its long-lasting wear and glossy sheen.

Aside from her role in “Euphoria,” Cherry made waves during New York and London Fashion Weeks this February, walking the runways of LaQuan Smith and GCDS and sitting front row at Fashion East and Maryam Nassir Zadeh, among others. She explained her experience modeling and acting has also impacted her approach to beauty.