PARIS — Changes are afoot in the upper echelon of Sephora, the world’s largest beauty retailer.

Chris de Lapuente, who has steered Sephora for the past 10 years, is to be succeeded as ceo by Martin Brok starting Sept. 14.

“I want to thank Chris for transforming Sephora over the last decade to be one of the world’s most successful retail brands with a unique culture and a formidably strong organization,” Bernard Arnault, chairman and ceo of LVMH, said in a statement.

De Lapuente, who is a member of LVMH’s executive committee, told WWD that Brok is “going to be a fantastic leader for us. We find him a very balanced leader. He’s got a great track record on business and also on people and organization development, which is very important for our culture. We are very much a people-driven business.”

De Lapuente said Brok has a similar background to his own. “He grew up in Holland, but then he has lived in 10 countries,” the executive explained, ticking off some European countries, South Africa, Brazil and the U.S., today Sephora’s largest market. “He speaks five languages, so he’s very international.”

De Lapuente added Brok — who most recently served as Starbucks Inc.’s president of Europe, Middle East and Africa, after jobs at Nike Inc., Burger King Corp. and The Coca-Cola Co. — has a passion for retail operations. 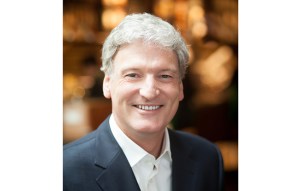 “He’s done some super work on Starbucks. The whole Milan Reserve Roastery project was very much led by him, which has been tremendous,” said de Lapuente, referring to a vast, eye-catching Starbucks location in the turn-of-the-century Palazzo Delle Poste building in the Italian city.

“I wanted a leader who was going to fit in the culture and take it to the next level,” said de Lapuente, adding he finds Brok to be a fun person and someone he can work with well.

“My remit will be to help him succeed and accelerate the breakthrough projects,” said de Lapuente.

Brok was to begin at Sephora at an earlier date, but his arrival was postponed due to the coronavirus pandemic.

Prior to that, Sephora had been growing sales at double digits for a long while. “We’ve tripled the business in the last 10 years in sales and profit; we’ve been gaining market share basically everywhere, and we have big ambitions,” said de Lapuente.

The executive would not discuss numbers, but industry sources estimate that in 2019 Sephora generated sales of close to 10 billion euros.

“If we think of what it takes to get to the next big milestone — what are the strategies, the big bets, the breakthroughs, the new markets and categories — that’s going to be his biggest challenge,” said de Lapuente of Brok. “I have a great leadership team, so we don’t need him to be stuck in the day-to-day business. We’re bringing in a highly experienced leader. He’s going to be 100 percent focused on Sephora with very much the mission to create the next breakthrough chapter.”

De Lapuente attributed Sephora’s tripling of sales during his tenure to numerous factors, including the building of a brand that resonates strongly with consumers. In 2019, between 50 million and 60 million people shopped at Sephora, which in a decade expanded its geographic reach from 20 countries to 36 countries on four continents, including a solid footprint now in China.

“We have huge opportunities to make our brand more available to more people around the world,” he said.

At Sephora, de Lapuente also cited a great work culture and organization, which is diverse.

“Of the top 100 people that work at Sephora, two-thirds of them are women, [mainly locals]. When I arrived, basically a third of the leaders were women,” said de Lapuente.

The brand employs people of diverse nationalities and ethnicities. Today in the U.S., Sephora is working to increase its Black American leadership and the percentage of its brands founded and led by Black Americans.

“Everyone is welcome at Sephora, and everyone is encouraged to be themselves,” said de Lapuente.

A main reason he has remained at Sephora for so long — instead of just three to four years — is the employees there.

“I get a lot of energy from my people, and I give them energy,” said de Lapuente. “There is a very passionate culture when you go into Sephora stores.”

Today there are 2,650 of those worldwide.

“There is a culture we call ‘Standing Together, Winning Together,’” he said. “The way the teams care for each other [during] the crisis has been phenomenal. The people have really gone out of their way to look after each other, help and support each other. That doesn’t come by accident, it comes by creating a culture which is competitive — it’s about winning, delighting the customers better than anyone else — but also about being very supportive.”

What has further helped spurred business were brands co-created through LVMH’s Kendo beauty brand incubator and partnerships. De Lapuente said Sephora has been pushing the envelope on innovation and developing an ominchannel offer.

As with other stores, that retail channel has been key to Sephora during the pandemic, especially when almost all of its doors were closed around the globe.

“Our e-commerce business was fully operational, and because of all the investments we’ve made over the years, we were able to satisfy the increased demand,” said de Lapuente, adding that was a main reason Sephora was able to grow its market share.

Though not at the same pace as at the start of the pandemic, Sephora’s e-commerce traffic continues to increase strongly even as brick-and-mortar stores have reopened. De Lapuente noted some consumer nervousness about shopping in big malls and that wearing masks can be a bit of an inhibiter for trying on products. But still, the footfall is gradually returning.

“Every month that goes by the traffic numbers improve, as people feel more comfortable about going out shopping in malls,” he said.

For the executive, the primary focus during the pandemic has been on creating a safe environment for Sephora employees and customers.

The retailer continues to focus on experiential elements in-store, where it’s created beauty studios and hubs for certain product categories.

“We will continue to invest on that,” said de Lapuente.

A new flagship was just opened in Warsaw, while in Paris the door in the Passy neighborhood, one of Sephora’s most historic locations, is being upgraded.

Meanwhile, Sephora remains committed to improving its sustainability agenda. A few years ago, de Lapuente decided that all Sephora stores would use LED lighting, and the retailer is nearing that goal. In parts of France, electric vehicles make deliveries.

“We are pioneering working with brands that are promoting recycled plastic, recycled ingredients,” he said.

In Europe, Sephora has started an initiative called Good For You, which helps inform consumers about product ingredients.

Some years back, de Lapuente’s purview was expanded to include not only Sephora, but also oversight of department store Le Bon Marché and the brands in LVMH’s perfumes and cosmetics division, except for Parfums Christian Dior, Guerlain, Givenchy Parfums and Kenzo Parfums, which report to Claude Martinez.

“Given the size of Sephora, the complexity of retail, the fact that we are so global — Sephora deserves to have a ceo that is 100 percent focused on [it], like I used to be in my first six years,” said de Lapuente.