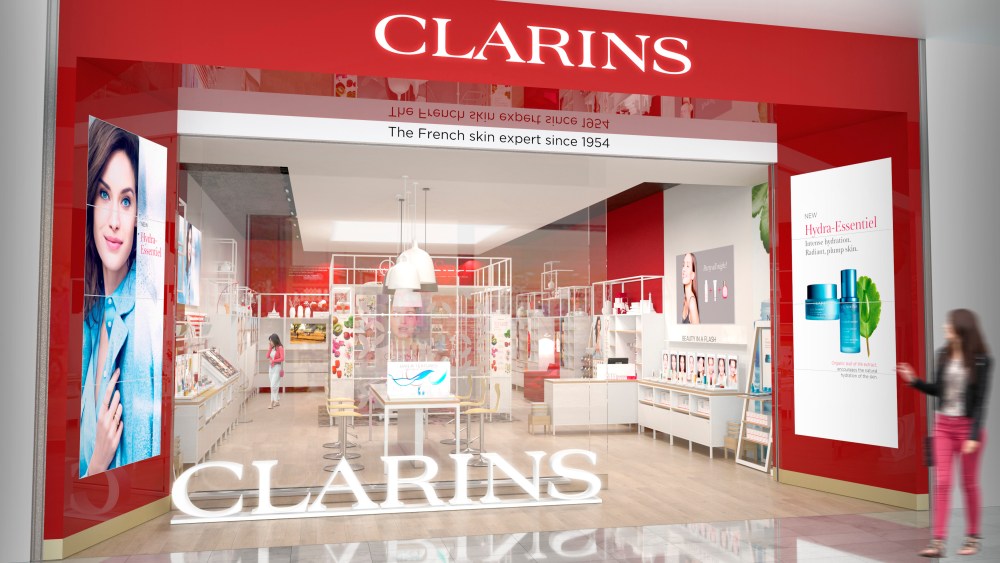 Clarins Group USA plans to open its first freestanding store in the U.S. on Thursday in an effort to showcase the breadth of the brand and provide a taste of the spa experience.

It will be located in the King of Prussia Mall, outside of Philadelphia, and measures 1,800 square feet. In the heart of the store will be a 250-square-foot spa, which will be staffed by two aestheticians performing 30-minute facials priced at $30.

In addition to the two aestheticians working in the spa area, five sales people have been hired and the group has undergone 16 days of training.

The retail portion of the store, designed by Clarins in-house Paris design team, will house skin, body and sun care; makeup and men’s products. The assortment adds up to 356 stockkeeping units. There also will be a selection of exclusive products, now found only on clarins.com. One example is the Invigorating line of shower gel, shampoo and conditioner.

There also will be Beauty on the Go travel-sized products and accessories, such as self-tanning mitts and masque applicators.

Danyelle Boilard-Paul, executive vice president and general manager of the U.S. division, said that she and Jonathan Zrihen, global chief executive officer of the Paris-based parent have mapped out an ambitious plan to open other freestanding stores in the top 10 U.S. cities by the end of 2020. The locations on the list include New York, which might be next, plus Los Angeles, Chicago and Miami, she said.

Outside of the U.S., Clarins opened its first store in Hong Kong on Nov. 19. A spokeswoman noted that a Paris store is being contemplated for the near future, as part of a global retail expansion. Clarins still operates a beauty institute there that was first opened by founder Jacques Courtin-Clarins in 1954.

In the U.S., which Clarins entered 30 years ago, the company has operated spas that sold some products on Madison and Amsterdam Avenues in New York. Both are now closed. Clarins also has installed treatment rooms in department stores, such as Bloomingdale’s, Nordstrom  and stores on the West Coast. But until now there have been no freestanding stores.

One of the reasons, apparently, for picking King of Prussia is that the sprawling retail center claims to be the largest U.S. mall in terms of leasable space following a 155,000 square foot expansion in August.

Boilard-Paul declined to discuss numbers, but industry sources estimate that $1 million would be a reasonable first year sales target for such a store and eventually hit $2 million to $2.5 million a year. They also speculated that the cost of construction approached $1 million.

While those units are doing well, she continued, a freestanding store has more capacity to offer more product, choices and services. “We want to be free to express our brand the best way we can and that is complicated in a department store,” she said.

She also thinks the customer awareness generated by the new store will benefit the existing businesses around the mall.