Makeup Museum’s official opening might be indefinitely delayed because of Coronavirus, but that doesn’t mean it’s not of interest to sponsors.

Conair, the hair tool brand founded in 1959, joined as an official sponsor of the museum, even offering photos and artifacts for the museum’s debut exhibit, “Pink Jungle: 1950s Makeup in America.”

“The focus of the first exhibition is the Fifties, and we created a master list of brands that have strong connections there,” said Doreen Bloch, the executive director and cofounder of the museum. “Conair was founded in 1959, and we had a chance to speak with Sophia [Wojczak] and Babe [Rizzuto], the daughter and granddaughter of Leandro Rizzuto [founder of Conair]. We are just getting to know the people who are keeping the brand and the legacy alive.” 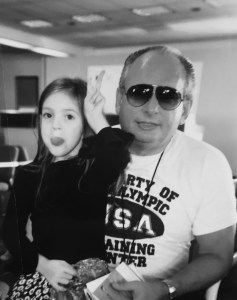 Conair joins the likes of Erno Laszlo and Givaudan, both of whom also contributed artifacts to the exhibit. The company loaned a Conair Yellow Bird Pistol Grip Hair Dryer, as well as family photos.

“The Yellow Bird Pistol Grip Hairdryer was what brought the salon home, and it’s something that’s going to resonate today at a time when we can’t go to the salon,” Bloch said. “It’s interesting to think back to a time when women were sitting at the salon for literally hours. Conair revolutionized that by reducing time in the salon.”

The hair dryer’s addition to the exhibition, as well as Conair’s involvement, also bring a commercial vantage point to consumer trends of the era. 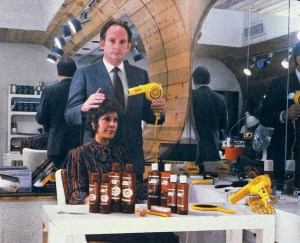 “With Conair, we not only have an idea of how people were interacting with product, but how they were creating product. One of my favorite things are photographs from the Rizzuto family of their first facility in Brooklyn. This man, Leandro, had an idea. Within a few decades, he has transformed how women interact with beauty,” Bloch said.

As a part of the partnership, Makeup Museum will also be going live with Sophia Wojczak on Instagram this Friday. Wojczak’s own hair care line, Leandro Limited, was inspired by her late grandfather. To Bloch, connections like that between Wojczak and her grandfather are the stories she aims to highlight in future exhibits. “You might look at a product and not know the full story of how or why someone created it,” she said.

The Makeup Museum Scratches the Surface of Cosmetics