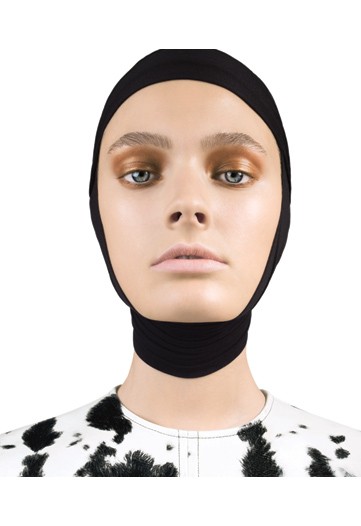 Call it beauty’s microdermabrasion moment. For spring, makeup ar tists are indulging in a clean sweep and using minimal makeup to maximum ef fect. “It’s squeaky clean,” says makeup ar tist Hannah Murray, who exfoliated model Constance Jablonski’s skin to create a superclean canvas for this look before blending bronze gold cream shadow into the eye sockets and brushing up Jablonski’s brows to create a sense of strength. “It’s a play on masculinity.” Jablonski’s strong features and athletic physique, honed from years of playing tennis, accentuate the look’s stark and minimalist feel, a look seen for spring on runways such as Vera Wang, Calvin Klein and Chloé.

Makeup will go out on a limb—or two—for spring. Faux tribal tattoos caused a stir at the Rodar te show, for instance, where Maori facial tattoos inspired the designs inked on the model’s arms. Jean Paul Gaultier took the trend one step fur ther by creating bespoke faux tattoos incorporating models’ names in Gothic text. “It’s tough—she’s a rebel, cool and hard,” says Murray of the personalized tattoo she concocted for Jablonski. PaulHanlon tempered the toughness with a ladylike—if slightly off-kilter—teased beehive coif. “It feels like she’s done it herself,” he says. “The mistakes make it seem more organic.”

Jablonski, a 19-year-old Frenchborn stunner, may have missed out on the Seventies and Eighties, however, hairstylist Hanlon offered the teenager a taste of the decades by amping up spring fashion’s feminine feel with references to vintage Revlon campaigns and Vogue shoots. “It’s retro, but I wanted to break it up so that it’s not stiff,” he says of the uber feminine look. Murray riffed on springtime’s penchant for pastels, taking as inspiration the sweet hues championed at Viktor & Rolf, Burberry Prorsum and Versace.