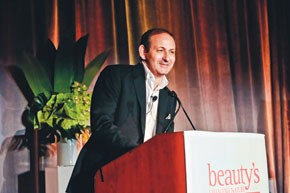 “WE FACE A REAL CHALLENGE IN THE BEAUTY industry,” said Marc Pritchard, president of strategy, productivity and growth at Procter & Gamble, as he introduced his panel at the WWD Beauty CEO Summit. “In spite of our great products, latest technologies and extensive marketing, the consumer is looking at us and asking one question: ‘What more are you doing for me?’

Back to WWD Spring Beauty

Pritchard tapped John Demsey, group president of the Estée Lauder Cos. Inc. and chairman of the MAC AIDS Fund; Susan K. Neely, president and chief executive officer of the American Beverage Association, and William McDonough, founder and principal of McDonough + Partners and author of “Cradle to Cradle,” a book on environmental sustainability, to make the point that today’s changing consumer consciousness requires that beauty companies not only serve a consumer’s needs and desires, but must also connect deeply with her values and ideals.

“As an industry we always innovate with new ingredients and products, and although the FDA states that we’re virtually the safest consumer products industry that they regulate, with a stellar track record of protecting consumers, concerns still get raised by credible activists and legislators,” said Pritchard. “So consumers want constant reassurance that we are responsible. There are a lot of voices out there. And sometimes, she pays more attention to initiatives that negatively target our brands. The truth is, we are doing a lot as brands and as an industry to protect consumers. But the question is, are we being heard? What do we need to do to ensure our voice is heard to reassure consumers we are doing everything we can to be responsible, while still innovating to meet her ever-increasing desires?”

With the sustainability issue, “we’re past the tipping point on the importance of environmental sustainability to consumers,” said Pritchard. “She’s already spending money on organic foods, energy-efficient appliances and electronics; 60 percent of beauty consumers consider sustainability important and are actively doing something about it in their everyday lives.

And social responsibility is becoming increasingly more important to consumers, he pointed out. “Virtually every company in this room is giving back,” said Pritchard. “We have collectively given more than one billion dollars to various charities and causes, and more and more brands are getting involved with various causes that are important to consumers. Are we communicating with consumers about all of the good things that we are doing as an industry? Is there a need for individual brands to do more cause-related programs, and is this something [ceo’s] should think about as an ongoing strategy to respond to the new consumer paradigm?”

Demsey, who has guided the MAC AIDS Fund to raise more than $120 million to date with sales of Viva Glam lip products, explained how MAC has done well by doing good.

“When we began this program, we were doing this in a very grassroots, heartfelt way — it was something that all of our employees around the world were engaged in day in and day out, being ambassadors to selling this product at point of sale and via community efforts,” said Demsey. “The original Viva Glam Charitable Checks, when they were given out 14 years ago, were unsolicited. Eight checks were sent out for $50,000 because when the money came into the office in Canada, nobody knew what to do with the money. Eight checks were dropped into eight food banks across North America. And those organizations still today talk about receiving those checks and with the tears of joy of receiving this money unsolicited.”

After Demsey joined the company 10 years ago, he spearheaded an evolution of the program, which increased the scope of the Viva Glam activity, the fund-raising activity, the nature of the organization and the outreach of the program, in the process “becoming the sort of key DNA and sort of soul and charitable heart of the company itself,” said Demsey, noting that RuPaul was the first Viva Glam spokesperson. “In a decade, we have had subsequently 15 Viva Glam spokespersons, five additional Viva Glam fund-raising campaigns.” The latest face of the campaign is singer Stacy “Fergie” Ferguson.

“There always have been amazing, irreverent, iconic personas, not afraid to speak out about AIDS and about charity and making a difference,” Demsey continued. “And what’s interesting is 10 years ago MAC was a niche player that didn’t even rank in the top 10 anywhere outside of Canada, and we were raising about $150,000 a year via our Viva Glam activities. Today, MAC is the number-one color cosmetics brand in North America, the fastest-growing color brand around the world today and the second largest non-pharma funder of HIV AIDS organizations in the world. This is something that the company is incredibly proud of and something that is the driving force of the community effort of the people who work for the company itself.

“Now the question is often asked, is this the reason why people come to buy MAC? The answer is sometimes yes and sometimes no. People are aware of it, sometimes people come to us because it’s something that they feel good about, being able to spend $14 and make a difference and buy something good for themselves.”

Neely spoke to the importance of responding to activists’ claims — even when such claims seem unfounded. “Societal expectations are at an all-time high,” said Neely. “Our consumers expect a lot more of us — not just great products or safe products, but they want us to go the extra mile. I’ve been working in this public policy/public affairs arena for almost 30 years and I’ve never seen anything like it. So it’s the context in which we have to run our businesses and it’s the context in which we have to think about the broader policy, societal agenda as a part of the business strategy.”

“I’m here today to give you a tale of what happens to some world famous brands when societal expectations meet activists’ agendas in the digital age,” said Neely.

In first responding to the charges, the American Beverage Association recommended that consumers concerned about calorie intake choose a non-sugared beverage, such as a diet cola or bottled water. “[We said] obesity is about personal responsibility, so don’t drink soda pop, drink one of our many other products. Well, societal expectations were much, much bigger for that.”

And in this atmosphere, she said, activist groups can leverage these concerns and create difficult situations. “The issue starts with gurus who set the stage, corporate campaigners isolate sexy, sound-bite kind of aspects of that issue and attack major trademarks in order to get media attention. That filters into the mainstream groups and then it is picked up by policy makers who translate that into onerous regulation and legislation.”

Neely found that the best defense was a good offense.

“We asked moms what they thought, because we really wanted to know what the gatekeeper to our next generation of consumers was thinking,” Neely said. “The key insight they gave us, first of all, was that it is the [sale of sugared soda] in the schools — not the product itself.”

Mothers said they wanted to see restrictions on sugared soda sales in elementary and middle schools, and that they wanted the industry’s help in educating their children about good nutrition and making good choices. “So we said, okay, we want to be with moms,” said Neely. “And there’s actually a nexus for collective actions here.”

The ABA did two things which Neely credits with turning the tides. “First of all, we did something substantive and we came up with our own voluntary policy about what would be sold in schools,” she said. “So let me explain to you what this policy means. We listened to moms, right? Younger kids want more restrictions, it’s milk, juice and water only. Older kids, high schools, they can have choice. This isn’t about singling out a product and saying soda pop is inherently bad, that was very, very important to us. This is about reducing calories [and offering] diet soft drinks, beverages that have other nutritional or electrolytes, other value, like 100 percent juice and sports drinks.” Full-calorie sodas also were taken out of schools altogether. “That was very, very significant in the public domain and really got a lot of attention,” said Neely. “No one could believe it. I mean schools are a nano percent of our overall market but the symbolism of this issue had become enormous.”

Next, Neely found a powerhouse third-party endorser — no less than former President Bill Clinton’s charitable foundation and the American Heart Association. “[President Clinton] had created an alliance with [the American Heart Association], Alliance for a Healthier Generation, and they had a very specific school focus,” said Neely. And we put together a memorandum of understanding with him; we have three years to implement this policy, we’re two years into implementing it and it has worked very, very well for us.”

McDonough spoke to one of the industry’s most pressing issues, environmental sustainability, and how the beauty industry can drive sustainability with aspiration. “I don’t believe sustainability is about making ingredients, packages and products ‘less bad’ and sacrificing performance and profits to do so,” he said. “It’s about making them ‘more good’ and doing so in a way that builds your business. It starts with changing your mind-set and beliefs. Most think about the product life cycle as ‘cradle to grave.’ I advocate that we shift our thinking to creating products and packaging that move from ‘cradle to cradle.’ It’s about designing products and packages in a way that gets them into a renewable, perpetual cycle. It’s about designing them with the end in mind to create tomorrow’s nutrients.

McDonough emphasized that “being less bad is not being good.”

“If you find yourself saying, ‘Well, I’m going to be less bad tomorrow’ it’s essentially saying that you’re bad,” he said. “It’s like saying I could leave here and go north to New York or south to South America — and if I found myself going 100 miles an hour toward New York, I’m going in the wrong direction.”

While celebrating natural ingredients, McDonough believes that “we also have to find a way to celebrate synthetic.”

“For example, in the indigo industry, most indigo is now synthetic,” said McDonough. “Synthetic indigo is far better than natural indigo. Natural indigo is a mutagen. It’s really going to be critical for us to understand that there are such things as intelligent synthetics.

“Working together we could develop a cradle to cradle list, a positive list of materials used for formulation,” he continued. “Everyone could share in this list using materials that have been assessed through those 19 fundamental questions of ecological and human health.”

Added Pritchard: “Sustainability is a product and package design challenge that is about doing more, versus giving less. Consumers are not willing to make trade-offs, so our objective would be to think about sustainability as giving them more,” he said. “It’s about making the beauty experience better, while making it better for the environment.”