Ranging from minimalistic to artful extremes, the hair and makeup looks on the spring 2014 European runways had just the right amount of edge.

By Jennifer Weil and Cynthia Martens and Julia Neel on November 8, 2013
View Slideshow 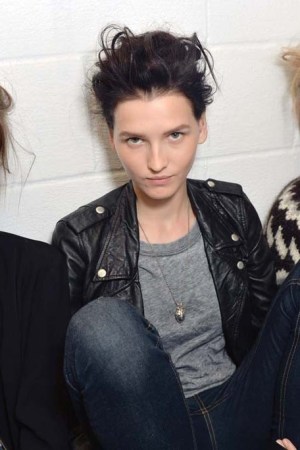 Ranging from minimalistic to artful extremes, the hair and makeup looks on the spring 2014 European runways had just the right amount of edge.

There wasn’t a hair out of place in Milan, although many of the spring looks were deliberately asymmetrical. At Missoni, Eugene Souleiman clipped black or blonde hair extensions to the backs of models’ ponytails, while at Emilio Pucci, Luigi Murenu opted for “sexy, tousled hair that’s sport on one side and glamour on the other.” Guido Palau had precise shades of blonde, red, brown and black tailored to each model’s locks at Prada, with help from colorist Josh Wood.

Lingerie shades had a starring role on the catwalks of London Fashion Week. Tones of mink, soft pink, peach, terra cotta and nude played over models’ cheeks, eyes and lips, creating an effect that MAC senior artist Cher Webb called “natural romance.” “This is an incredibly elegant, wearable look,” she said. “The models weren’t rushing to grab the cleanser when they finished a show. They wore the look afterwards. When I received the MAC spring/summer 2014 forecast palettes, I realized that these were colors that I wanted to keep and wear myself; they’re flattering on everyone.”

Elsewhere, lashes got major love at Paul Smith and Mulberry, with the lower lashes getting coated in black in a nod to Sixties ingenues. An interplay of matte and shine was at work at Peter Pilotto and Burberry, as slightly sweaty-looking skin was offset with powdery pastel lips, while grungy, smudged eyes added attitude at Erdem.

“It really was a world of two extremes—of all or nothing,” said makeup artist Pat McGrath of the beauty looks at the Paris women’s spring 2014 ready-to-wear shows. Metallics (which she called “molten metallic”) abounded, for instance, at labels such as Givenchy, Dior, Dries Van Noten, Jean-Charles de Castelbajac, Maxime Simoëns and Haider Ackermann. Gold was particularly plentiful, whether drawn in a thin line down the parts in models’ hair as at Dries Van Noten, swiped boldly across the eyes as at Dior or splattered seemingly haphazardly as seen at Vivienne Westwood. Meanwhile, intricate eye-shadow techniques were used at Elie Saab, Gareth Pugh and Chanel, where the multicolored eye art perfectly expressed the creative bent of the season.

Paris also saw a preponderance of natural looks, which McGrath described as “minimal individualism,” a “very much ‘this-is-who-I-am statement’” that acted as a foil to the rich clothes, she says. Ditto for the hair. “Normally, the hair design is created to either complement or offset the designer’s collection,” says Guido Palau, who this season kept it toned down at Lanvin and Valentino.