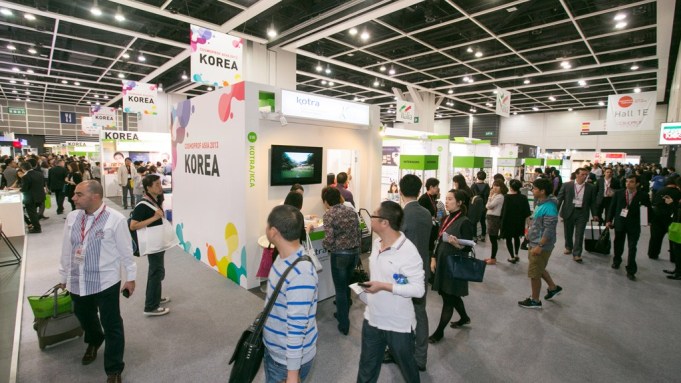 HONG KONG — China is no longer the only star in the East. Cosmetics manufacturers attending the recent Cosmoprof Asia trade fair here say they are finding other Southeast Asia markets more rewarding.

Although Chinese buyers were abundant and the sound of Mandarin seemed to dominate on the floor of the trade fair, held at the Hong Kong Convention and Exhibition Centre from Nov. 13 to 15, vendors said the priority lay with markets like Japan, Hong Kong, Singapore and Southeast Asia. To be sure, expanding into China continued to be a focus for many exhibitors, but executives from smaller companies, in particular, said they found importing into China prohibitively onerous as it requires a lengthy and expensive registration process.

“It takes time and money and if you don’t have the right contacts it’s not possible to manage,” said Mauro Chiraiatti, sales manager at Benessere Natura, an Italian producer of organic beauty and skin-care products. Other countries are much easier, he said, noting that dealing with Hong Kong is like dealing with any European country and that getting approval to import into a big market such as Japan is far faster. For many companies in attendance, it seemed Southeast Asia was a particular area of interest.

In fact, UBM and Bologna Fiere, the fair’s organizers, said there were 2,168 exhibitors from 43 countries and regions, a 10 percent increase from last year. Attendance, numbering 69,985, was also up 10 percent from a year ago. Chinese buyers were out in force at the show. Organizers set up a special Chinese buyers’ lounge last year in response to the increasing number of buyers from the mainland and this year also introduced a separate check-in for visitors from China. The show floor was packed and exhibitors said they felt overwhelmed, particularly on the first day.

“During the first day we were attacked, people coming in from each side. It was not dangerous, but hard. Really hard,” Chiraiatti said, adding that sales in Europe and North America have been good but, for growth, his sights are set on the Far East. “I’m looking for the right importer and distributing company in this part of the world. The Asian continent has had the growth and you cannot ignore this.”

Indeed, according to Euromonitor, spending on “super premium” cosmetics products in Asia grew from $5.8 billion in 2008 to $7.9 billion in 2013, driven mostly by emerging middle and upper classes in developing countries.

BB creams, which were first popularized in Korea, were abundant at the fair, as were CC creams, or “color correcting” creams — considered the next generation BB cream. Whitening products continue to be popular while natural or organic skin care also gained traction. One new trend this year appeared to be an abundance of creams and masks featuring snail extract.

Because of the lower income level in Southeast Asia, Celltrion is introducing a slightly different line of BB cream for the region with lower price points, said Jun Ho Yoon, overseas sales manager at the company. The packaging will also be altered to make it more “funky and fun” for the younger population.

Overall, the company hopes to achieve overseas sales next year of $20 million, or about 15 percent up from a few years ago, said Yoon. The company is currently exporting to Hong Kong and has set up a subsidiary in China. It is also preparing registration documents in China now, but expects it to take one year.

It is mostly only larger companies that have the resources to invest into China. Another Korean cosmetics company, Coreana, for instance, set up a plant in Tianjin, China, in order to abide by Chinese regulations that make it difficult to introduce and import new products. The cost of getting a single product tested and approved for the Chinese market can run about $3,000. Products for the Chinese market are now produced at the plant in Tianjin with technology and ingredients imported from Korea.

Besides the regulatory difficulties, China is also different from other markets in Asia in that customers — particularly those in northern China — tend to prefer products with heavier, richer textures with more perfume. Elsewhere in Asia, the preference is for lighter textures with little perfume, said Seong Rae Kim, cosmetic science 2 team leader at Coreana Cosmetics.

Notably, the number of Korean exhibitors was the largest ever, with 190 companies in skin care, makeup, nail and personal care as well as formulation and packaging solutions.

“I think awareness of Korean products is on the rise all over east Asia,” said Kim, attributing the increased awareness to the popularity of K-pop as well as Korean TV dramas and movies. Psy’s breakout hit “Gangnam Style” has also helped boost Korea’s cultural profile worldwide, Kim added.

Coreana is considering expanding Westward but said that such a move would require long-term investment as well as research. Just as Western companies have set up R&D centers in Asia to better understand the market and adjust products to local tastes and skin types, Asian cosmetics makers need to do the same if they hope to expand west, he said.