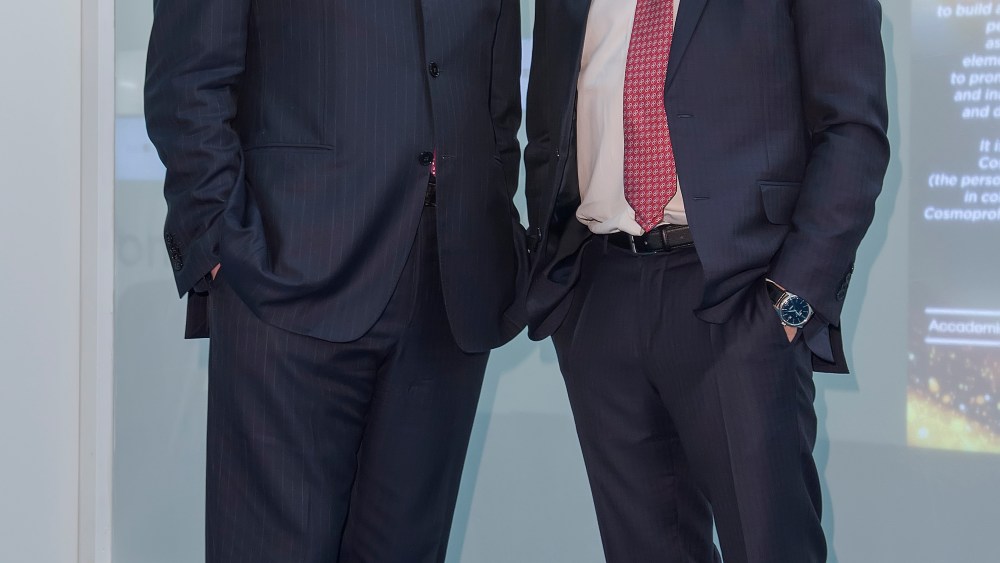 BOLOGNA, Italy – As the Italian beauty industry races to keep up with rapidly changing times, many of its recent developments were reflected in the evolution Cosmoprof, which celebrated its fiftieth anniversary here.

The trade show, which ran from March 16 to 19, had undergone a sea change embodied by the addition of the Cosmoprime section – focusing on masstige brands and swiftly emerging categories such as multiethnic and natural labels – while social media and Millennials help carve out beauty’s new landscape.

“We are in the middle of revolution,” said Jeffrey Wagstaff, general manager of Cosnova Inc. “These are exciting times.”

Cosmoprof has earmarked 140 million euros, or $149.3 million at current exchange, to expand both at home and abroad, with fairs planned for Colombia and Mumbai, and – further down the road – North Africa.

“If you want to remain leader, you can’t sleep,” said BolognaFiere’s president Franco Boni, who succeeded Duccio Campagnoli last year after the organization’s board voted him out.

Leading into Cosmoprime, located by the fairground’s main entryway, stood a hallway lined with vintage magazine imagery from the past half century. There was also a genuine fragrance assembly line, where attendees were gifted a 50th anniversary perfume.

That machinery was added as “an opportunity to get people closer… to involve a little bit of magic and discover [some] secrets of this world,” said Michele Scannavini, president of the Italian trade agency ICE, who emphasized the important role the cosmetics industry has in promoting the Made in Italy movement and attracting foreign investors to the country.

For the first time, Cosmoprof, in its Cosmoprime pavilion, carved out a space dedicated to beauty brands created with various ethnicities in mind, including TwistedSista, Alikay Naturals and Mielle Organics.

Also in this hall was the Extraordinary Gallery of niche brands, formerly housed in a pavilion much further back in the fairgrounds, with labels such as The Soappharmacy, Soha Sardinia, Mimesis, Patchology and May Coop.

Just next door to this was the Be Organic area, showcasing nearly a dozen brands, and the Glamour Me corner, where people could try out various products.

Also in Cosmoprime, Dr Russo was introducing its latest novelty. “We’re launching the very first day moisturizer with an SPF 50 that has the claim of all-day protection with a single application,” said Luca Russo, founder and ceo of the brand, explaining that the product’s efficacy lasts 10 hours.

Russo, who was very happy with the Cosmoprime pavilion, showcased as well a brush-on technology and a primer-foundation hybrid, plus revealed he was working on a children’s range.

“The brush will remind them of face-painting,” said the executive, adding that the product will first appear in a color like red or yellow and then – after application – morph into skin tone.

Cosmoprime was also home to the Buyers’ Lounge, where retailers networked, and was open one day prior to Cosmoprof, in tandem with Cosmopack, the packaging trade fair housed just upstairs.

“The beauty supply chain is changing, and the exhibition is changing with the field. The companies here are focusing on sustainability, on new trends – and I’m not just talking about Millennials,” he continued, naming as other examples halal-related needs and full-service solutions.

Among the suppliers at Cosmopack was Intercos – back after some years of absence. Omnicos was showcasing numerous innovations, including a delivery system that when twisted turns solid powder (thanks to a scraping mechanism) into loose powder.

“Today, you sell not only a product, but sometime a concept,” said Domenico Cicchetti, the company’s ceo.

Another novelty being highlighted was called Face Fit. It allows people to massage their skin with the silicon packaging prior to using the creamy foundation housed in one side and/or the highlighter in the other.

HPC has been developing a stock line with its creative department, which presents trends twice yearly, and using in-house tools.

“The idea is to show versatility, like a chameleon,” said Eric Firmin, president of HCP. “We can change the color of the decoration and answer to the fast speed-to-market [demands].”

One product the company was spotlighting was the Fusion Slim Wand, an extended base for lipstick. “By making it longer, we bring an added value,” said Firmin. “Here, you create a new gesture; it’s like holding a pen. It is much more precise.”

It’s packaging that can ultimately be used for other beauty categories, too, such as eye shadows or concealers. And HCP was offering – among other innovations – an array of decoration techniques as an answer to the growing demand for product personalization.

Indeed, innovation and speed were bywords echoing throughout the trade show halls. At Cosnova, parent of the affordable Essence and Catrice cosmetics brands, 1,000 new stockkeeping units are produced every year – fast.

“We could create innovation in six to nine months,” said Javier González, general manager and co-owner of Cosnova. “Below 12 months, definitely, and some of our competitors used to move in the two-year horizon.”

But now, thanks to the dot.com revolution the company is adapting to the new reality that e-commerce can move innovation faster than before, albeit with challenges.

“When you go below six months you have to look at the product and say: ‘Can I create this item with existing stock and tools?’” he said.

The new normal also includes lassoing the social media’s massive power. “It’s about [using] influencers as a marketing tool,” continued González. “It’s about learning what influencers are talking about and reacting very quickly to that trend in the market.”

Cosmoprof’s naturals pavilion also showed new life, drawing a throng. Among the labels spotted there was Profero Cosmetics. Founded in 1999 by siblings Ine and Rob Toll, the Netherlands-based company produces bath-and-body products under a range of labels, including Just No Nonsense.

“In our field more and more people are telling what is not in [the product], instead of saying what’s in it,” said Ine Toll, referring to moniker for the brand that discloses the percentage of perfume used in each product.

Headquartered and with a laboratory in Lyon, France, plus a soap factory in Aleppo, Syria, is the Najjar company producing the Najel brand.

“We distribute products in organic supermarkets,” said Alexandra Foubert, Najjar’s export sales manager, who explained 60 percent of the company’s business is generated in France, with the largest export markets being Poland, Spain and the Netherlands.

In the line are about 20 stockkeeping units of soap made with olive and bay laurel oils. “The business is very good; we have more than 10 percent growth each year,” continued Foubert

Euro Biolabs, based in Estonia, grows the flowers and other plants for the green cosmetics it produces for brands including Dr. Konopka’s, Natura Estonica Bio and Natura Siberica, all of which were presented at Cosmoprof. The company’s bestselling label is Organic Shop, for bath, skin and hair care.

The hair pavilion had a fair share of brands with a natural or an ecological bent, as well. Davide Bollati, founder and chairman of Davines SpA, recounted that among his happiest moments was receiving B Corp. certification, marking the brand’s entry into a high-profile group of companies with a keen focus on sustainability.

The executive, who plans to open a new, expanded factory next year, charted Davines’ course for 2017. “The direction is sustainability and performance,” he said. “We want to have more performance products that are [increasingly] sustainable. We are working more and more with the chemistry of plants. We would like to become the new Tesla of the beauty industry – better than Telsa.”

Distributed in more than 60 countries, including Spain, Canada, India and Korea, was Sicily-based professional natural hair brand Rica. It has lines including colorant Colorica and the premium hair-care range Naturica, whose product ingredients are inspired by the Mediterranean’s rosemary, capers, chestnuts and prickly pears.

“We wish to enter the U.S. in a year,” said Nunzio Puglisi, the brand’s research and development director, who also revealed that by the end of 2017 the first Salon Rica will debut in Catania, Sicily.

L’Oréal Professionnel introduced two new product lines, as well: Powermix, by Serie Expert, an instant mask that is freshly made in front of the consumer, and Direct Color, a colorant collection with a wide range of hues that can be changed frequently, since their effects last between three and seven shampooings only.

The brand also was hosting the United Pro Future contest for hairdressers under 30 years old. Top Italian stylists made up the jury that chose 25 people who would be able to attend L’Oréal Professionnel’s academy.

“It’s the kind of project where we really want to push the expertise of the market,” said Gabriele Visentin, marketing director of L’Oréal Professional in Italy.

Another bustling pavilion was focused on South Korea. Wishcompany, founded in November 2010, is a global marketing concern, offering business-to-business and business-to-consumer distribution for beauty products. The Korean company also has its own hypo-allergenic cosmetics line, called Dear, Klairs.

“We are developing some products after hearing the customers’ voice,” said Eddie Baek, director of Wishcompany.

Dear, Klairs’ Supple Preparation Facial Toner is ranked in the top 30 of Amazon in the U.S., he said, adding: “We are looking to expand in Europe.”

The Domont stand was showcasing a number of its brands, including the 10-sku Urban Skin System line, out domestically in March, which focuses on antipollution care with purifying, reviving and daily defense. Domont’s other label, Nature, has formulations worked around birch juice.

Adwin Korea Corp., which manufactures and supplies beauty and healthcare products primarily focused on masks, was introducing its latest formulas, based on charcoal and gold, at Cosmoprof.

The Korean company’s largest markets are the U.S. and Russia, according to Adwin’s managing director Hong Sup Kim. He explained the format of masks is rising in importance.

“We’re developing new packaging types, like rounded shapes, which are interesting for customers,” he said.

Redesigned Cosmoprof registered more than 250,000 attendees from 150 countries. The number of non-Italian visitors rose about 16 percent versus the same prior-year session.

Beauty buyers from as far afield as Japan and Mexico turned out. “I’m mostly looking for indie brands that haven’t been launched in Japan yet,” said Mai Okabe, buyer for cosmetics and fashion accessories at Isetan department store. She found Mimesis’ hair perfumes a good fit for her market. Additionally, the natural pavilion was in step with Japanese consumers’ growing interest in natural and organic products.

“[This is a] growing market, and our customers are very concerned about that – not just in cosmetics, but also in fashion, living, food – everything,” she said, revealing that Isetan was hosting a dedicated activity involving the category in May.

“There is still a big opportunity that we are looking for at the show right now,” said Gaspard.

The duo said they were hunting, as well, for products that extend the vibrancy of hair dye jobs, for use in between trips to the salon. They were also part of the expanding group of vendors and buyers showing a palpable interest in men’s grooming.

“We actually have created men’s sections within our stores – a men’s grooming and barbering section – to be a destination section for barbers,” said Gaspard.

Spa executives, meanwhile, were looking to ramp up the experiential factor.

“One thing that is interesting on the Millennial market is that they’re really looking for experience,” said Todd Shaw, chairman of the International Spa Association. “So there’s a disconnect with ‘I want something fast’… but also, ‘I want an experience.’ We’re seeing both of these segments right now really being able to play off each other.”

She ticked off examples including decoration, furniture, product lines and clothing. “What I want to see is a product line that actually helps me create an experience,” said Shaw.