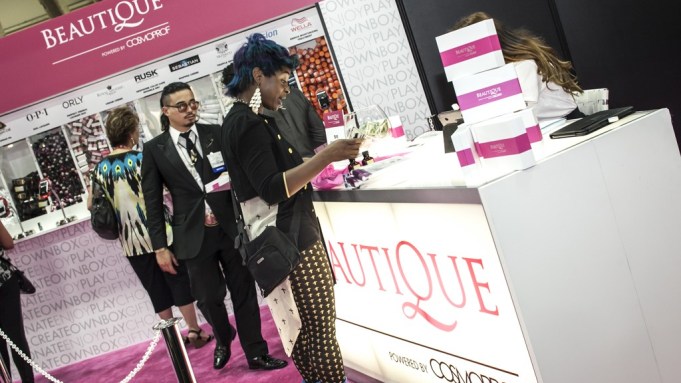 This year’s Cosmoprof North America show was all about wooing the tech-savvy, innovation-seeking Millennial.

To wit, the three-day event that ended on Tuesday, held in Las Vegas at the Mandalay Bay Convention Center, was filled with youth-oriented offerings like glitter tattoos from professional body art company G the Body Art Professional and a customizable nail wrap machine from Tat’z Nail’z, both of which caused a palpable stir on the floor.

“Much as I’ve noticed boy band covers and a liberal use of hot pink on my favorite magazines, many beauty brands are targeting a younger consumer as well,” said beauty blogger Amber Katz, who was scouting the floor for innovation. “Feed My Skin’s cartoonish font and hot pink and black packaging is surely geared toward that demographic. I also saw some glittery makeup packaging and heat tool brands bedecked with peacock, leopard and decidedly [girly] hues that would be right at home in a well-versed beauty girl’s dorm room.”

To reach this younger consumer where she shops, quickly-expanding retailer Ulta was also on the lips of many exhibitors as a top choice for distribution.

“Ulta provides a wonderful selection of our products in an inviting, nonintimidating atmosphere,” said Scott Friedman, chief executive officer of color cosmetics brand NYX, which has been sold in Ulta since 2007. “They have a huge selection of brands and provide something for everyone, so this sends Millennials into their stores.”

NYX, which has been growing its Ulta in-store presence since its entry into the retailer, was teasing its new products, which are due in January. Among them, a Fifties-inspired Blotting Powder, a two-sided pencil eyeliner called Two Timer and Primal Colors, intensely pigmented face color for “funky” facial art. “Our product particularly resonates with the Millennial consumer because it has a great color range and represents a quality to price value,” said Friedman. “Since our founder and our head of p.r. were both in their 20s when NYX began, speaking to Millennials is completely organic and has been since Day One.”

Tigi, whose Bed Head hair-care line is another Ulta brand geared toward a younger clientele, revealed its updated Catwalk packaging, meant to harken consumers back to the brand’s recent history. “It’s the original logo from about five years ago,” said Angie Tullis, vice president of education development for Tigi. “The new packaging is cleaner and easier to identify on the shelf.”

Furthering the Millennial trend were hair brands like Macadamia Nut Oil, which targets younger consumers with products like its upcoming Volumizing Dry Shampoo, due in September. Another was Sexy Hair, launching its newest collection, Style Sexy, a unisex styling line, to Ulta doors in mid-August. “We know that younger consumers are very passionate about beauty and hair care and are always on the cutting edge of products and technology,” said Karl-Heinz Pitsch, president and ceo of Sexy Hair. “Style Sexy is a line targeting these younger trendsetters.” Of the brand’s distribution through Ulta, Pitsch added, “We are lucky to partner with a retailer like Ulta to help us leverage these vehicles along with their other marketing elements such as in-store exposure, e-mail and direct mail.”

Nail care brand Orly, which also distributes through Ulta, was showcasing its new logo, updated packaging and “Alice in Wonderland”-inspired fall collection, called Surreal. “We are launching the new Orly here at Cosmoprof,” said John Galea, communications manager for the brand. “We’ve also revamped the Web site [with the goal of] making it a destination about colors and trends behind our collections.”

To represent the niche market’s take on targeting the Millennial beauty consumer were brands like Brooklyn-based hair brand Beauty and Pinups, whose booth featured a DJ and plenty of retro imagery. Shlomo Klein, vice president of sales for the company, was promoting its line of argan oil-based hair and skin products designed for tattoo protection. “There are so many tattoo parlors in the U.S. and we thought, ‘Let’s tap into that market,’” said Klein, adding that the brand targets women between 15 and 40. “Everywhere you go you see tattoos and pinup hair. It’s an underserved population.”

Another smaller company aiming to reach collegiate-age women was Dye Ties, a brand based out of Park City, Utah, offering hand-tied hair ties and headbands that could be color-customized for college events.

“College students have become very savvy,” said Erez Barak, president of consulting firm Surge Universal, which stocks several hundred U.S. college campus bookstores with beauty brands. “They are spending five to 10 hours on the computer, they see what’s hot, and based on this I’m trying to get the right product on the college bookstore shelf.”

Barak said he was at Cosmoprof seeking hair-, skin- and nail-care offerings as well and tools, with the goal of creating professional hair tools sections in college bookstores. “It’s a not a new channel but in the last year it is starting incorporate more professional brands,” he said, naming brands like Belson, Helen of Troy and Solano as contenders. “[College consumers] want the capability to get beauty products right on their campus.”

Fitted with a number of new features, the 2013 showcase included Discover Beauty, which spotlighted up-and-coming beauty brands seeking distribution. Italian skin-care brand Skin&Co. Roma received the first Discover Beauty Award, announced at a cocktail party Sunday night. This year’s event also included a first of its kind “open see” audition for brands to pitch their products to a panel of executives from HSN, QVC and Canada’s The Shopping Channel. “In a 15-minute pitch we really got the nub of what the products and the brand were all about,” said Claudia Lucas, QVC’s director of merchandising for beauty. “We saw about 12 brands and there are probably three that we’ll follow up on.”

Lucas said that, for her, attending Cosmoprof is all about increasing QVC’s portfolio. “The reason we go to Cosmoprof is to find new product and new brands, and between the Discover Beauty event and the open see we saw upwards of 24 brands and it was a very efficient way for us to see a lot. Walking that floor I know that 90 percent isn’t going to be relevant to my business, so [it’s about] how I cut to the chase and get to see the things I really want to see.”

Another debut offering at this year’s event was a deluxe sampling initiative for charity, called Beautique, as was an updated Cosmoprof app for iPhones and Android smartphones. Attendees could also check in via Foursquare for show specials and scan the new CPNA QR Code for show promotions. “We wanted everyone to stay connected all the time,” said Daniela Ciocan, director of marketing for Cosmoprof North America, adding that free Wi-Fi was also offered throughout the event. “It’s an opportunity for everyone to still communicate with their offices.”

Among the retailers in attendance were Beautysage.com, C.O. Bigelow, Duane Reade, Henri Bendel, HSN, QVC, Amazon.com and Dermstore.com. “I came to the show looking for new and innovative products,” said Marcia Gaynor, general merchandise manager of beauty and Look Boutique for Duane Reade. “By bringing in new items early, we add excitement and can differentiate the Look Boutique from other retailers. You can then build a following of clients who know to come to us for the new and unique.”

For the second year, four beauty editors for online publications also walked the floor meeting with brands, keeping their followers aware of show happenings, while five “trend scouts” from the Penrose Academy in Scottsdale, Ariz., tweeted throughout the show about new products that caught their eye.

“Mobile devices are changing the way the Millennial consumer is interacting with beauty brands and services, they are always connected and always shopping — any time of day, in any location,” said Maya Mikhailov, executive vice president and cofounder of GPShopper, who spoke on a panel at Cosmoprof about innovative digital strategies for beauty brands. “Millennials are spending almost as much time daily staring at their mobile device as they spend in watching television. The beauty industry has to embrace this new behavior and use it as an opportunity to make meaningful connections with their most valuable customers.”

According to Ciocan, this year’s event, the 11th to date, also addressed the increasing role of digital for the beauty industry in terms of the conferences offered. “Two conferences were to deal with mobile, e-commerce and gamification and [one was a] conversation about marketing online and some of the things brands have done successfully,” she said, adding that the show included 892 exhibitors from 38 countries, including South Korea, Pakistan, Spain and Turkey, and 26,000 attendees, an increase of 8 percent from the year before.

While walking the floor, another trend came in the form of a notable juxtaposition, as many futuristic beauty device brands sat side by side with natural brands touting unusual, nature-sourced ingredients. From classic botanicals like the seemingly omnipresent extract, argan oil, to more unusual formulas made of bee and snake venom and 100-million-year-old clay, the floor was abuzz with curiosity-piquing invention.

Spanish skin- and body-care brand Clayspray, for one, offers customers a dose of prehistoric clay via spray canisters to help with circulation, regeneration and antiaging. “Clay has been used medicinally for centuries,” said Norberto Mugarza, ceo of Clayspray, adding that the brand is used professionally in countries like India, Turkey, the Ukraine and South Korea. “The U.S. market is our priority right now.”

Dr. Robert Rey, who once starred on The E Channel’s “Dr. 90210,” was also on hand at the Discover Beauty Floor promoting his new organic skin-care line, Dr. Rey Antiage Skincare, formulated with cactus extract and a molecule that mimics viper venom. “I wanted to come up with another solution to the knife,” said Rey, adding that he is working on a fragrance featuring lion pheromones for the Brazilian market.

When it came to hair devices, there were plenty of hair-restorative machines on the show floor as well as updated classic appliances, including Croc’s Premium K Dryer, due in August, which features a temperature-regulating system to avoid overheating. Another offering was a unique four-in-one hair implement from Nicka K New York, which offers a variety of styles with interchangeable wands. Salon hair tool brand ISO Professional showcased its MP3 hair straighter, which holds up to 1 gigabyte of music to make styling hair more entertaining. Devices were even billed for cosmetics application, including South Korean brand IQueen, whose vibrating makeup device is meant to help foundations and face powders spread more evenly on the skin.

Opening the event on Sunday morning was Arianna Huffington, who gave a keynote speech on “fearless leadership.”

She shared the story of her publishing career, which only took off after being rejected by 36 publishers and weathering negative reviews and failed relationships. “Failure is not the opposite of success, it is a stepping stone to success,” she said, adding that women tend to internalize stress more than men. “Keep plowing through when things get tough. Learn to see what is around the corner.”