The fair's Extraordinary Gallery remains a hotbed of international niche and luxury beauty products. Here, an array of products that were on display.

By Jennifer Weil and Cynthia Martens and Pete Born on April 18, 2014
View Slideshow 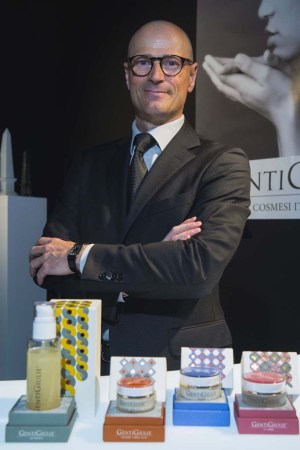 BOLOGNA, Italy — Cosmoprof’s Extraordinary Gallery remains a hotbed of international niche and luxury beauty products. Here is an array of products that were on display.

Among the first-time exhibitors was Genti Giulie, a high-end, niche Italian skin-care label based in Verona. With intricate, colorful designs on the handmade packaging, the four Genti Giulie products — a cleansing milk, eye cream, face mask and face and body cream — were developed around the concept of ancient Roman beauty rituals, and are all Made in Italy. Prices range from about 80 euros, or $110.5, for the 200-ml. cleanser, to about 240 euros, or $332, for the cream. While open to entering a variety of markets, company president Andrea Gaffé said he was “strongly pursuing contacts in the Middle East.”

Kirsten Ankersoe, founder of Paris-based Isabelle Ariana Parfums, has been carefully crafting her premium fragrance brand for expansion into more international markets. With seven niche scents — such as last year’s Ombre Coquine — already on shelves in high-end perfumeries, Ankersoe said she expects to launch six more in the next year, adding, “A few years down the line, we’ll enter skin care.”

With prices ranging from 95 euros, or about $131, to 139 euros, or $192, the Isabella Ariana scents come in rectangular glass bottles, each with a label featuring an old logo Ankersoe plucked from her business partner Paul Singh’s ceramics factory.

Hailing from New Zealand, the certified organic Moana skin-care line was also showing inside the gallery, with two traditional Maori dancers performing by the booth. Cofounder and executive director Nina Tasev said Moana products derive their hydrating properties from a red seaweed extract called Glycoplus, which is combined with other active botanicals, all indigenous to New Zealand. “We do not use the standard cream base” of many skin lines, she explained.

Outside its native territory, Moana is sold in Australia, Hong Kong, Canada, the U.S. and the U.K., and Tasev said distribution was likely to expand soon to the European Union, Turkey and China. On the more expensive end, a serum retails for about $95, while most products fall in the $55 to $80 range. A body and hair-growth range are in the works.

Human+Kind, an Irish natural skin-care label with a focus on gentle, multifunctional products that simplify the user’s beauty routine, is sold in the EU, the Middle East, South Africa, Singapore, Hong Kong and New Zealand, at retailers such as the Sephora in Milan’s newly renovated Brian & Barry department store. “We pride ourselves on attractive packaging, but also on being accessible to a broad range of customers,” said director and founder Rene Van Willigen. He added that the brand was “in advanced talks” with U.S. distributors.

French brand Tom Robinn, founded in 2003 and targeting men on the go, limits its number of products to three for the “everyday gestures” that men make in front of the mirror, with four categories (Rescue, Essential, Control and Perfection) corresponding to different lifestyles.

“We asked, What are men missing?” said Anthony Romeo, business developer for the brand, noting that too many beauty companies tried to sell men on lengthy, complex regimens that do not square with their habits. “We don’t try to educate them, we don’t force them into anything,” but instead offer solutions to men’s most basic skin-care issues, Romeo said.

Distributed in Russia, Japan, Hong Kong, Brazil, Italy and France — in department stores BHV and Galeries Lafayette, for instance — Tom Robinn products range from 11 euros, or about $15.20, to 30 euros, or $41.50, in price, which Romeo said was lower than competing selective skin-care brands. “We want this to be a recurring purchase,” he said.

At the booth of another French men’s personal care line — 66°30 Soins Essentiels Pour Homme [which refers to the tilt of the Earth’s axis, producing the changing seasons] — president Didier Arthaud was discussing his plans to add a shaving cream in September, while he also is at work on an antiage serum, with a clinical approach. All the products in the 14-stockkeeping-unit line are Ecocert certified organic and made in France. The shaving cream is expected to be priced between 22 and 25 euros, or $30 and $35, for 150 ml. A 75-ml. travel size is expected to be marked 12 to 15 euros, or $17 to $21. The antiage serum could be priced between 49 and 57 euros, or $68 and $79, for 30 ml.

The company, based in Singapore, was founded nine years ago, and it markets skin-care supplements, such as Bio Cell Serum, Ceramide Serum, Vitamin-C Serum, Lx Advanced Eye Treatment Cream, Water Base Sunblock and Quasi Serum for a skin with a translucent finish. The supplements, all created out of natural ingredients, are designed to be combined to produce a desired effect, such as an antiaging or antiacne treatment. A 30-ml. bottle is priced 69 euros, or $95.31.

The brand is distributed in 17 countries, but Finland is its only European market. “We want to look for distributors in Europe,” said Yokota, who singled out France, Germany, Spain and Italy as targets.

“It has opened a whole new niche in beauty, which is skin fitness,” said Siân Sutherland, founding partner and chief executive officer of Mio. “We don’t just sell where beauty brands are; we sell where our women are.”

So alongside the likes of Space NK (where the label launched in January), Selfridges and C.O. Bigelow, Mio is also sold in gyms. Sutherland said the brand was about to be introduced in 85 Lifetime locations in the U.S., as the skin-care partner, for instance.

“We do a lot of brand partnerships,” she said.

The Mio skin fitness line includes 11 stockkeeping units and two kits. Prices in the U.K. range between 15 pounds and 35 pounds, or $21 and $49 at current exchange.

Mio, which is carried in 14 countries and based in the U.K., was about to launch in Germany and had recently been introduced in China. Forty percent of the brand’s business worldwide is generated through its Web site mioskincare.com.

“For us, it’s nice to be in places like Cosmoprof, because we see a lot of people that we just talk to on the phone,” continued Sutherland. “A lot of our international distributors come here. We’re not looking for huge expansion; we like to grow in a very strategic, very slow [manner] — in the right way.”

Taking inspiration from Buenos Aires’ tango cafés and bars is Ayres, a line launched in October that’s comprised of three body-care collections and one home range.

The Miami-based label’s founder and president is Argentina-raised Alejandro Rasic, a former Estée Lauder Cos. Inc. and LVMH Moët Hennessy Louis Vuitton executive who moved to the U.S. from Argentina at age 19.

“I still miss those traditional places,” he said of the cafés and bars.

Ayres’ various collections include Midnight Tango, Pampas Sunrise and Patagonia, each of which are comprised of a body lotion, shower cream, body butter, body polish and bar soap.

“All of the products are natural,” said Rasic.

There are also two candles in the home range — one for calming and the other for energizing.

“We have a travel collection that we are working on,” Rasic revealed.

Ayres was launched through Birchbox in November, when 30,000 samples were sent out, followed by 60,000 more in February. “It worked really well,” he said.

Ayres is also carried in The Modern Chemist in New York and online through ayresbeauty.com.

Rasic explained he was at Cosmoprof to look for new distributors, especially in Europe — in countries such as the U.K., France, Italy, Spain and Germany — and Asia — in markets including Japan and Singapore.

Maya Gulbrandsen, founder of Maya Water, made the best of a bad situation. The Norwegian makeup artist had broken her back and was hospital-bound. A longtime user of Vichy and Evian mists, she often was spritzing herself and began to wonder why such products had never been made with the pristine waters of Norway.

So she took the idea and gave it a twist.

“We are the first in the world to mix sourced water with antioxidants,” she said of her facial mists that include the thermal spa water plus organic white tea, goji and acai.

Gulbrandsen suggests Maya Waters should be used often — even 20 to 30 times a day — “to get skin moist and pumped with protection.” They can be used to cool down or for beautifying, she explained.

In the U.S., Maya Water is carried online through spirtibeautylounge.com and beautybar.com.

“We’re not in many places yet, but now the world has come to us,” she said, adding her goal at Cosmoprof for the three-year-old brand was “the sky; the sky is the limit for us.”

Gulbrandsen said more products will be added to the Maya Water collection.