For those fans of innovation, the Extraordinary Gallery was a feast of new products, strategies and viewpoints.

By Cynthia Martens and Jennifer Weil on April 3, 2015
View Slideshow 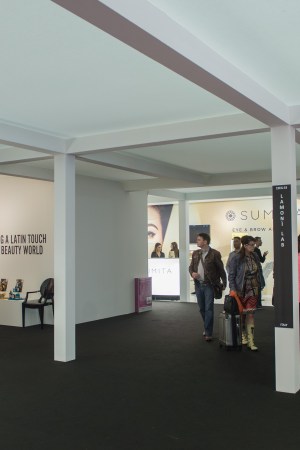 For those fans of innovation, the Extraordinary Gallery was a feast of new products, strategies and viewpoints. Here is a sampling of some niche offerings that stood out.

Emmy award-winning makeup artist Eve Pearl was also on hand. Known for her extensive work in the entertainment industry, Pearl was showing a range of multifunctional foundations, concealers, blushes and powders, which aim to create a natural look that appears flawless even on high-definition television.

“We feel, truly, that it’s skin care, that’s going to give you immediate results and lasting benefits,” Pearl said, referring to the various treatment ingredients present in her three lines, Eve Pearl, Pearlfx and E-P Pro. The powders, for instance, contain hyaluronic acid, aloe and vitamin E, while the liquid foundations contain retinol, aloe, coconut oil and vitamin E; all have no fragrance or parabens. “It’s skin care with a little bit of color,” Pearl noted.

She also said that while many of her clients are professionals, the brand targets all women who want a no-fuss, straightforward skin and makeup routine. With a boutique in New York on Third Ave. and 50th St., Pearl also sells her products on QVC across the U.S. and in the U.K. In June and August, they will be available on QVC in Germany and France, respectively.

Pearl noted that men, too, have been buying her foundations, viewing them more as tinted moisturizers. “For us, the men’s market has been the fastest-growing market,” she said.

Arangara, which debuted in 2011, has been a steadfast presence at the Extraordinary Gallery for several years now. Based in Ardore Marina, Calabria, on Italy’s “Jasmine Coast,” the company gets its name from the local dialect: “a’rangara,” means “orange tree.”

Chief executive officer Giovanni Zappavigna, who took over the family’s decades-old farming business, sources most of Arangara’s raw materials from his 25 acres of organic citrus orchards.

Now present across most of Europe, in the U.S. and Canada, Arangara has an exclusive deal with the Four Seasons hotel chain for its Il Giardino line. That partnership was a game-changer for the brand, which today offers a full menu of consulting services — from product development, to marketing and training — to spas of all sizes, with a focus on tailoring amenities to the local culture, Zappavigna said.

At Cosmoprof, Arangara was showcasing an assortment of new products, including a hydrating cream containing red pepper extract, which produces a feeling of warmth when applied to the skin.

“Our current goal is to penetrate the Asian markets, and the Middle East,” Zappavigna noted. “The idea our project is built on is tied to the fact that we propose a partnership” and are open to creating ad-hoc products for clients, he added.

Julie Macklowe, a former hedge fund manager, succumbed to the lure of beauty and launched her Vbeauté skin care line, which now has seven stockkeeping units. She was talking up her new serum and discussing her two new masks. Her distribution largely consists of a high-low combination. Her brand was launched at Bergdorf Goodman in November 2011 and on Home Shopping Network last September. One of her goals is to find distributors and to roll out to a wider presence in the U.S.

Olga Alexandrova, company export manager, billed it as a “revolutionary, patented formula” given its spray format, as opposed to the sticks or mascara wands available for such product application. “It is very simple and quick for women.”

She added that Bye Bye Racines takes one minute to dry, is rain-resistant and disappears after one shampooing.

The product exists in light blonde, dark blonde, light chestnut and dark chestnut, while the next color on deck is red.

The sprays are sold domestically in locations including Paris’ Le Bon Marché department store and the Coloré par Rodolphe salon, plus through the company’s Web site, byebyeracines.com. The label is set to debut shortly in Russia.

Alexandrova said Bye Bye Racines was looking to broaden its retail reach in department stores, perfumeries and hair salons. Each canister of spray allows for 15 to 20 applications on average and retails for 35 euros, or $38.20 at current exchange.

Sumita Cosmetics – a one-year-old label with a focus on eyes and brows – was making its debut at the Extraordinary Gallery.

“We are looking for international distributors right now,” said Tyra Quereshi, an educator at Los Angeles-based Sumita. “When distributors buy the products, they get training for the service.”
Sumita Batra, who also created the 25-year-old threading company Ziba, founded the brand. Sumita products are current sold in countries such as the U.S., Japan and U.K.

Sumita boasts a wide range of products, many of which can be used on various parts of the face – not just eyes or brows. The line includes eyeliner pencils, gel eyeliners, mascaras, eyebrow pencils, brow wax and concealer.

HABA, based in Tokyo, was making its first appearance at Cosmoprof.

“We wanted to let everyone know about our company,” said Hiroaki Sai, director of HABA’s international department, who added the goal at the fair was also to pick up clients in Europe as well as other markets such as Asia.

HABA, whose moniker is an acronym for Heath Aid Beauty Aid, is a line of skin care, cosmetics and food supplements. Its products are free of parabens, fragrance, mineral oil, chemically synthesized tar color and petrochemical surfactant.

HABA skin care, which was being showcased in the Extraordinary Gallery, contains squalane, an oil extract from shark liver. Squalane diminishes in human skin over time, causing fine lines and wrinkles. HABA claims to have created a 99.9 percent pure squalane to help naturally replace skin’s moisture and therefore combat signs of aging.

“Squalane oil can be used for the whole body,” said Sai.

HABA is sold in numerous countries, including the U.S., China, Korea and Singapore, through various retail channels, such as department stores, mail order and online.