Chinese buyers were out in force and it seemed most of the exhibitors were either expanding in China or hoping to expand onto the Mainland. 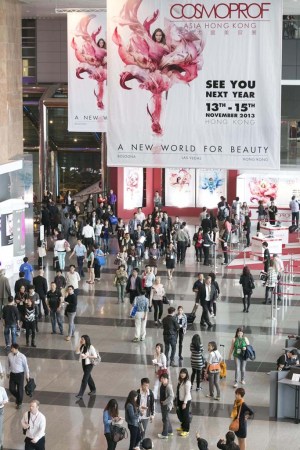 HONG KONG — All eyes were on China recently at the Cosmoprof fair.

Chinese buyers were out in force and it seemed most of the exhibitors were either expanding in China or hoping to expand onto the mainland.

Indeed, the number of visitors from China rose by 19 percent to 11,489, making up 20 percent of total visitors, according to fair organizers. Mandarin Chinese seemed like the dominant language at the fair at times and many of the vendors — whether Korean, Japanese, or European — had Chinese speakers at their booths to help buyers.

As a response to the growing number of Chinese visitors, the fair opened a Chinese buyers’ lounge on the ground floor of the fair, separate from the buyers’ lounge.

Given the sluggish state of the economies in Europe and North America, it’s not surprising that so many vendors were looking to Asia for growth. Vendors said sales to Europe, in particular, have been difficult with orders declining. By contrast, Asia is still a growth market.

Judy Wu, marketing director at Taiwan-based Aromatic Enterprises Co. Ltd., a packaging company, said sales to China doubled between 2010 and 2011 and increased 30 percent from 2011. Meanwhile, sales to the U.S. and Europe have been “calm.”

Severine Guichon of Nohèm, a French skin care maker that focuses on natural and organic products, described the market back home as “tough” with a lot of competition. Nohèm distributes its products in 12 countries in Europe, the Middle East and North America but is looking to expand in Asia as well.

The fair recorded a total of 55,386 visitors overall, a 14 percent increase from a year ago. Besides China, buyers from Australia, Japan, Korea and the U.S. were also a significant presence at the event, held in mid-November. Exhibitor numbers increased as well, up 10 percent from 2011. Fair organizers noted that there was a 19 percent increase in exhibitors from Europe with French companies leading with the most exhibitors.

While many exhibitors had an eye on China for future growth, company executives also noted challenges and difficulties of working in the Chinese market.

David McConnell, chief executive of Australia-based Gorgeous Cosmetics, noted that many of the Chinese buyers handle huge volumes, mentioning one Chinese buyer he spoke with who represents 3,000 outlets in China.

“Many don’t realize how large [of a market] it is.…We would have to ramp up production for six months (to meet that kind of demand),” he said.

Gorgeous Cosmetics, which is selling in Australia and expanding in North America, is close to setting up distribution in Thailand, he said.

As far as trends, vendors reported a preference for organic, natural and “safe” products. The fair had a special section dedicated to natural and organic products but many vendors in other areas had a focus on this as well.

Iris Wong, marketing director at PhytoCeuticals, which produces nature-based skin care products in New Jersey, said the company varies its formulas for Asia, creating a more lightweight base to accommodate the skin type and the region’s more humid climate. In the U.S., customers prefer moisturizing products, but in Asia, customer prefer products to be more lightweight. The base is adjusted but the active ingredients stay the same, she emphasized.

PhytoCeuticals distributes extensively in Asia — mostly in Hong Kong, Taiwan, Korea, Singapore and Malaysia — but not China yet because of the different regulations. The company’s products are all approved by the Food and Drug Administration, but “China is different” requiring a whole new application process, explained Wong. Still “everything is natural so we have confidence [that our products will be approved for distribution in China],” she added.

“It’s more work because of the regulations but it’s a must,” said Alicia Yap, purchasing director at Zecda. Zecda is distributing Esse products in Hong Kong. Esse, a skin care brand from South Africa, has been expanding in Asia, already selling in spas in Malaysia and salons in Singapore, and is eyeing China.